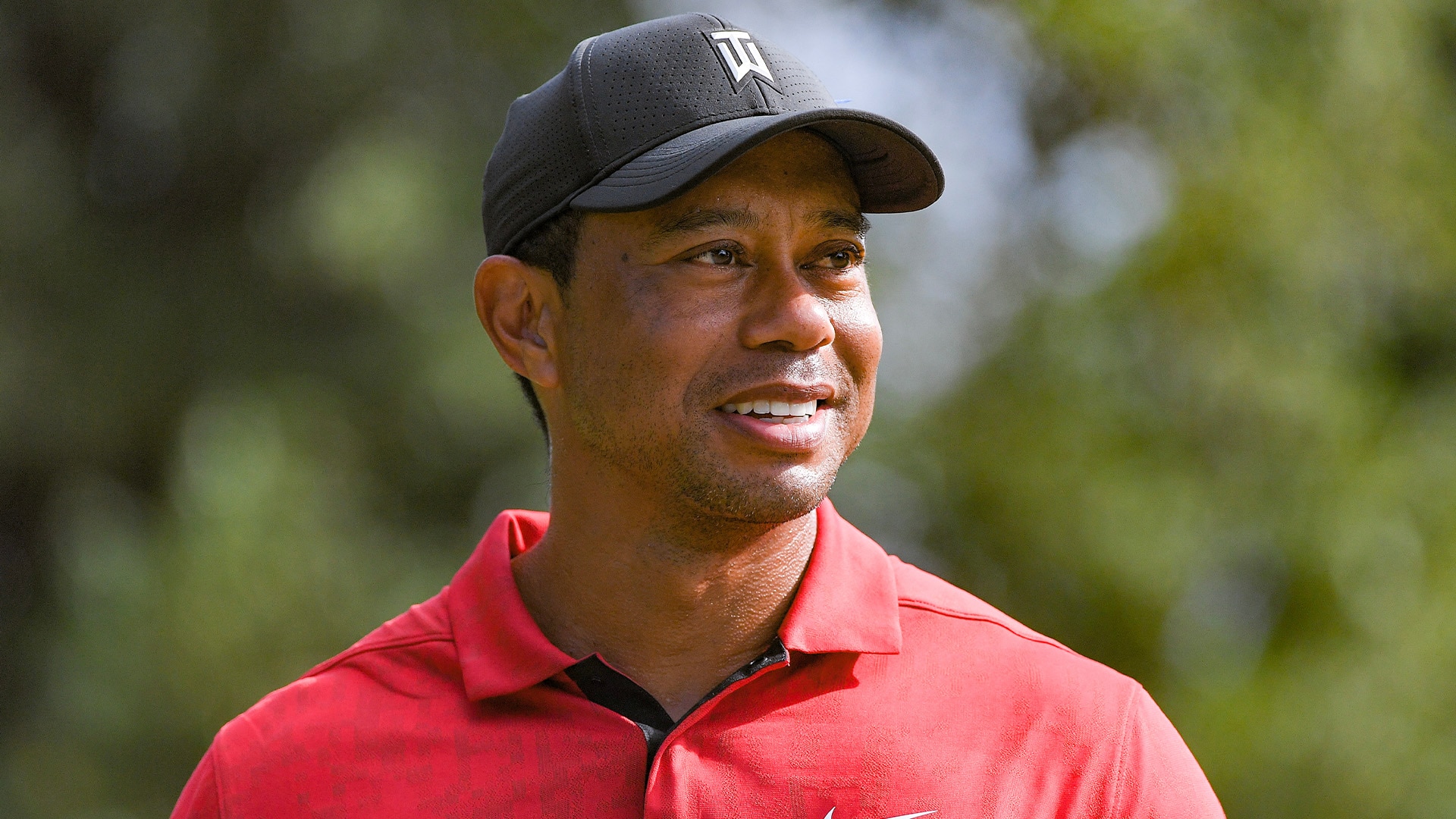 ORLANDO, Fla. – Tiger Woods’ competitive future may still be uncertain, but his first tournament in a year did offer a glimpse into where he might be headed. Here’s 10 things we learned about Woods at the PNC Championship:

1. FATHER FIRST. It’s easy to imagine Tiger the dad regularly dispensing all manner of golf knowledge to young Charlie along with regular swing tips to keep things moving in the right direction, but that doesn’t appear to be the case based on his response to a question about coaching Charlie.

“I'm his father. I'm not his coach,” he said. “If he wants to learn about the game of golf, he'll ask. I'm there as a sounding board. But my job is to be a parent and make sure that his priorities are right, and school comes first, and then if he wants to play a sport, so be it.”

2. NOT THAT LIMITED. There were two immediate concerns for Woods as it applies to his competitive future: his endurance and his swing speed. The latter appeared to be a smoke screen considering there was at least one occasion when he outdrove Justin Thomas and there appeared to be plenty of pop in his swing.

The former is also curious. While it was clear he’s still struggling to walk following the February car crash that required multiple surgeries on his right leg, the news that he was putting a new driver in play and was tinkering with a new 3-wood suggests that he might be physically limited but not that limited.

Matt Kuchar, after playing alongside Woods on Sunday, told reporters that he felt like Woods' swing and game, albeit in a cart, were PGA Tour-ready. Woods, though, quickly dismissed that.

"I totally disagree," Woods said. "I'm not at that level. I can't compete against these guys right now, no. It's going to take a lot of work to get to where I feel like I can compete at these guys and be at a high level."

3. LEGACY MAKER. Whether Woods still has the ability to set the competitive narrative remains to be seen and will be dictated by how his surgically repaired leg recovers. But two warm days in Central Florida proved Woods still has plenty of history to write.

Specifically, Team Woods will be a part of the PNC Championship for years, if not decades, to come. They came up two shots short in their second turn in the event, but Woods and Co. made it interesting with 11 birdies in their last 12 holes. By the time Team Tiger is finished, they might have to rename those champions' belts. 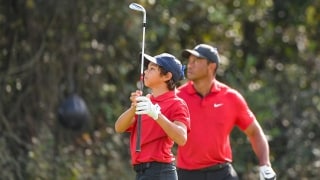 Highlights from Tiger and Charlie Woods' final round at the PNC Championship, in which they shot 57.

4. STILL CLUTCH. With a few exceptions, it wasn’t the same swing that’s produced 82 PGA Tour titles. But on and around the greens, Tiger's short game was vintage.

The plan was to rely on Charlie Woods off the tee and allow Tiger to do Tiger stuff around the greens, and that plan largely worked, like at the first hole on Sunday when he charged in a 10-footer or at the 12th when he rolled in a 15-footer, both followed by a knowing nod.

5. NOSTALGIA. Historically, Woods hasn’t spent much time considering his place in the game, but that’s changed as he nears his 46th birthday later this month and an uncertain competitive future.

He’s still content leaving his own past alone for the moment, but his willingness to examine the game through a more nostalgic lens suggests an evolving outlook. An example of this came on Saturday when he was asked about Lee Trevino.

“The shots that he played and how he did it, hardpan in Texas, and it transferred to pretty much everywhere around the world, people would just sit there and listen,” Woods said. “You guys know, you walk the range and you know guys who know how to hit a golf ball. Lee was that guy.”

6. BRING ON THE BANTER. Whether or not Woods got his competition fix from the two-day team event is up for debate, but what was obvious is how much he relished being among his fellow Tour players.

There was the knowing glance he gave Justin Thomas on Saturday following a particularly well-played 4-iron at the par-5 third hole and a light jab at Bubba Watson during Friday’s pro-am. “You going to cut it [his tee shot] or are you going to cut it?” Woods laughed.

He even had some chatter with Charlie.

"Charlie was out there telling me a couple times yesterday and today, 'Don't hit that shot, you know what that does,' " Woods recalled. "I said, 'Just worry about your own game.'

His game isn’t ready for primetime, but his trash-talk game is still in midseason form.

7. HE STILL MOVES THE NEEDLE. A year removed from his last competitive round, Woods said he had no idea what to expect at the PNC Championship. He was, of course, talking about his own game. As far as what to expect from the fans, it was very much familiar territory.

Tournament officials limited ticket sales, but the gallery that followed Woods had a Tiger feel to it – and even some of his fellow competitors took advantage of the opportunity. World No. 1 Nelly Korda went full fan mode on Saturday when she asked Woods for an autograph and posed for a picture with him. “Ah, so cool! Dream come true,” she said, smiling.

8. TALK THE TALK. Most of Woods’ comments since he emerged from his post-crash recovery have been about his legacy and keeping things in perspective, but there was a flash of the old Tiger who is still very much a golf geek when he explained his tee shot at the 17th hole on Day 1.

“I smoked a 7-iron at 17. I didn't believe I could get it there, but it was one of my old shots, so to be able to turn that thing down and hit that thing and squeeze it out there like that that was nice, even though it wasn't pin-high, but just the shot, the feel and the shape is what I was seeing,” he explained.

And again on Sunday: "I think I had a better sense of my feel of what I could do, the shots I could hit [as the weekend progressed]. If you noticed out there, I didn't really play a whole lot of draws. If I did, they were all short irons. Most of them were just hot cuts or slappy cuts up there, you know, something out there. The hardest part for me was what I saw distance-wise and what I felt on my last look – I always play by my hands and my last look, it didn't match up a lot of times. I was short. And then a few times, I actually hit it solid and I smoked it over a couple greens.

9. A CLEAR VISION. While his competitive future remains uncertain, there was one thing Woods was certain about: He will never use a golf cart at a PGA Tour event.

Woods spent the week zipping around the Ritz-Carlton Golf Club in a golf cart and acknowledged he wouldn’t have been able to play the event if he’d had to walk. When asked if he would ever consider requesting to use a cart in an official Tour event, however, there was no ambiguity.

10. AND FINALLY, NO BLUEPRINT. Despite Trevino’s assertion that he knows when Woods will play again, that doesn’t seem to be the case. Although there were plenty of highlights at the Ritz-Carlton to keep the notion of a comeback alive, it was clear that not even Tiger knows when – or if – that will happen.

“I'm not going to play a full schedule ever again. I'm going to have to pick-and-choose what events, and even then, my body might not cooperate with that,” he said Sunday. “I don't know how many events I'm going to be playing in.”

Save the wild speculation for next year. This tournament was about Woods spending time with his son, nothing more and nothing less. 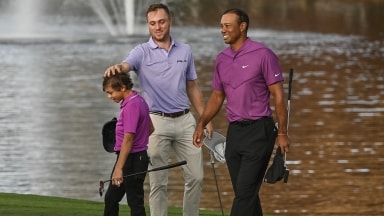 Woods played Augusta National last Tuesday with Charlie and Justin Thomas. For Woods, it was a once-in-a-lifetime experience. 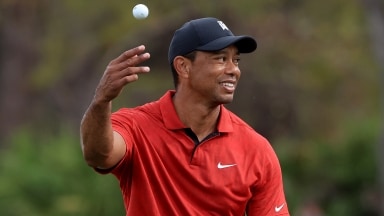 Podcast: Behind the scenes of Tiger's return

In this Golf Central Podcast, GolfChannel.com senior writer Rex Hoggard was on site and details what he saw first-hand. 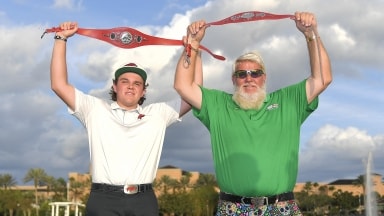 Team Daly broke the tournament record in winning the PNC, but it might have been the widest Tiger Woods ever smiled after a runner-up finish.