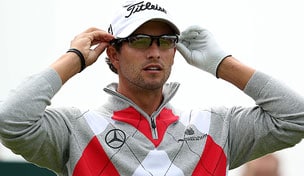 Getty Images
MARANA, AZ - FEBRUARY 26: Oliver Wilson of England watches his approach shot on the second hole during the second round of the Accenture Match Play Championship at the Ritz-Carlton Golf Club at Dove Mountain on February 26, 2009 in Marana, Arizona. (Photo by Scott Halleran/Getty Images)  -

The Australian happily settled for a 6-under 64 that gave him a one-shot lead after the first round of the 141st Open Championship.

In surprisingly benign conditions in the morning, Scott reeled off eight birdies after a bogey on the par-4 third. Though he dropped a shot on the final hole when his tee shot found thick rough left, Scott’s 64 tied the course record at Lytham that Tom Lehman shot in 1996.

Tiger Woods appeared in complete control of his game in Round 1, shooting 67 as he got off to a strong start in his bid to end a four-year winless drought in the majors. Rory McIlroy plunked a fan with an errant tee shot, leading to a double bogey, but he was able to rally and post 67, as well.

Other notables include World No. 1 Luke Donald, who carded 70, and Phil Mickelson, who had a wild round of 73.