All bunkers to play as waste areas at PGA Championship 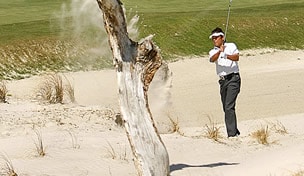 Getty Images
PONTE VEDRA BEACH, FL - MAY 05: Ian Poulter of England talks to the media during a press conference prior to the start of THE PLAYERS Championship held at THE PLAYERS Stadium course at TPC Sawgrass on May 5, 2010 in Ponte Vedra Beach, Florida. (Photo by Richard Heathcote/Getty Images)  -

You won’t see Dustin Johnson or any pro scratching his head and wondering if he’s actually in a bunker or not during the PGA Championship at Kiawah Island next month.

The PGA released a special notice Tuesday to inform players that all bunkering at Kiawah Island’s Ocean Course will be considered “sandy areas” and will be played “through the green.” For all practical purposes, the sandy areas, even when they look like traditional bunkers, will be played like waste areas, where players will be allowed to ground their club, remove loose impediments and even take practice swings.

In essence, the PGA is declaring that there will be no bunkers at the Ocean Course.

“Whistling Straits was obviously just the opposite,” said Kerry Haigh, the PGA’s managing director of championships.

At Whistling Straits, every sandy area was considered a bunker.

Why the difference? Here’s the explanation in a PGA statement:

“What differentiates the courses is that at Kiawah Island the sand is natural to the surrounding terrain, and in many cases, there is no clear definition of where such sandy areas stop and start. Bunkers at Whistling Straits were well defined and were completely surrounded by grass.”

Johnson and his caddie might differ in their understanding but Whistling Straits was built on entirely different Midwestern terrain on the shore of Lake Michigan. Kiawah Island is surrounded by natural sand dunes.

The condition of play at Kiawah isn’t a reaction to the controversy that derailed Johnson at Whistling Straits.

Here are more details from the PGA’s special notice:

“As a result of this [condition of play], players will be allowed to move loose impediments, take practice swings and to ground their club lightly in these sandy areas; except when their ball lies in such a sandy area that is part of a water hazard or lateral water hazard. Under the rules, if a player’s ball is believed to be covered by sand anywhere on the course, he may move the sand without penalty, in order to find or identify the ball.

“All sandy areas inside the gallery rope line will be raked each morning, prior to play. During play, as strokes or practice swings are made, or players and others walk through such areas, footprints and other irregularities of surface may develop. Rakes will be available so that these areas may be smoothed as a courtesy to following players; however, these irregularities of surface, when not smoothed, are a part of the game and no relief, without penalty, will be provided.”