Beyond the game: How four NCAA stars balance golf and life 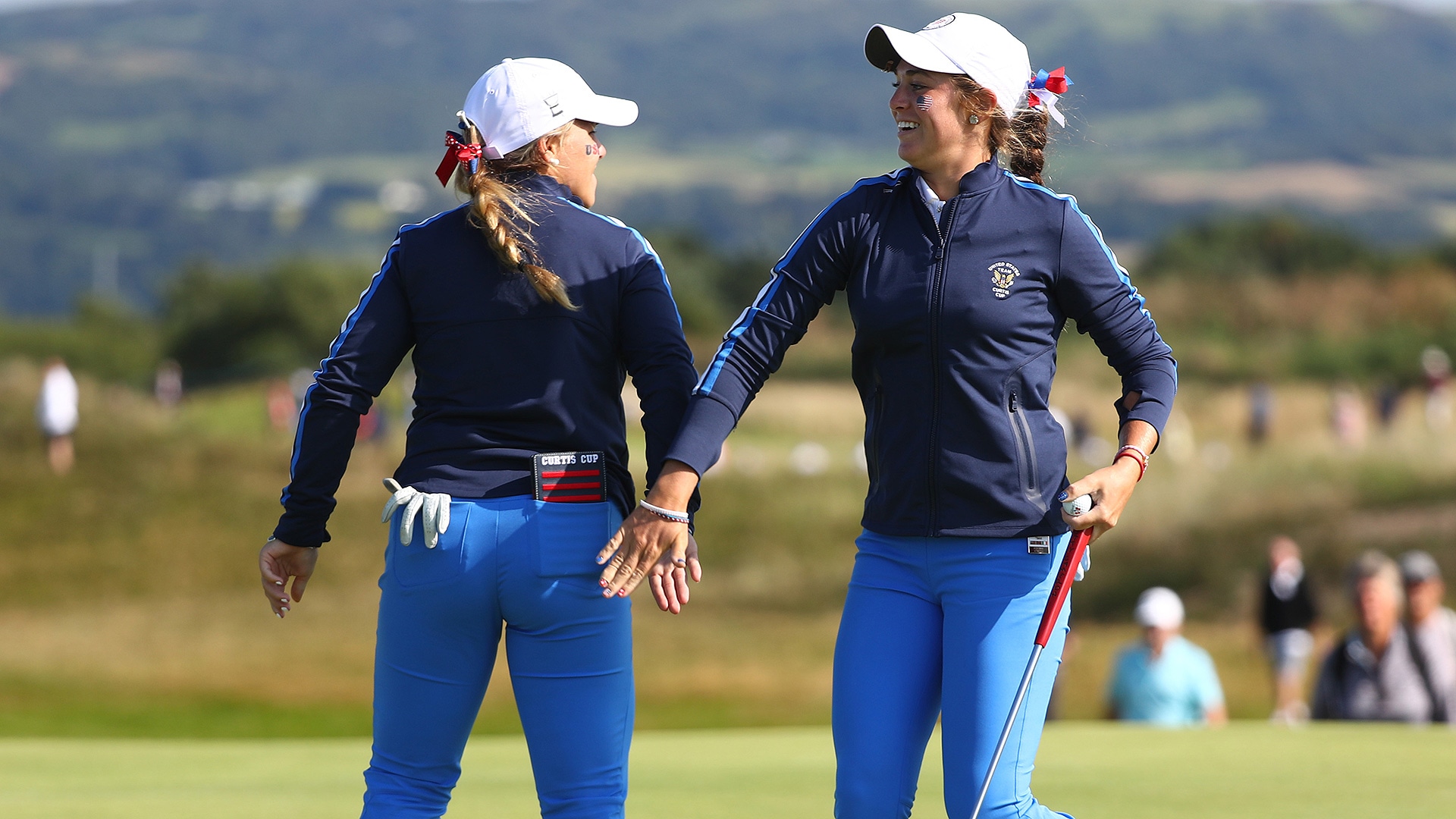 If you follow women’s college golf, you will recognize these names and their schools: Rachel Kuehn of Wake Forest University. Latanna Stone of LSU. Brooke Seay of Stanford University and Jensen Castle of University of Kentucky.

These heralded players have helped their teams win conference championships, are USGA champions and have represented their country internationally. To highlight a few accomplishments: Kuehn and Stone helped lead their teams to ACC and SEC championships, respectively, this season. Stone was runner-up at the Augusta National Women’s Amateur. Seay was the only amateur to make the cut at the Chevron Championship, the LPGA’s first major of the year. Castle won last year’s U.S. Women’s Amateur and will be in the upcoming U.S. Women’s Open and on the U.S. Curtis Cup team at Merion.

That’s just to name a few of their achievements. But while success is a result of the hard work these women put into their games, it only skims the surface of who they are.

“I’m a very hard worker and enjoy doing things every day to better myself in the long run,” said Castle. “I value friendships more than most and love surrounding myself around people who make me a better person.”

“My major is human behavioral biology and I’m interested in public health,” said Seay. “Writing is also a personal interest of mine, specifically poetry.” Seay also just received the NCAA’s Elite 90 Award, which is given to the student-athlete with the highest cumulative G.P.A. at the championship site. She has a 4.0.

Accolades, however, only reveal so much about an athlete. It’s important to dig deeper to learn, appreciate and admire who these women really are, aside from being great golfers.

“I try not to take myself too seriously and I give 100% effort in everything I do,” said Kuehn, a junior, when asked to describe herself. “I’m also someone who would do anything for my friends and family.”

Stone, also a junior, relayed similar individual characteristics. “I’m a very chill person outside of golf,” she said. “I enjoy being a homebody, but occasionally like to be spontaneous. Since I always have a pretty packed schedule, I like to keep it relaxing and chill when I am off the course.”

These personal characteristics seep into their games. As a personal aside, I was a Wake Forest teammate with Kuehn and witnessed first-hand the effort she puts into training, as well as her eagerness to have casual putting and chipping contests and support the people around her.

Rachel Heck, Stanford’s star freshman, also sees both sides of Seay, a junior for the Cardinal.

“She [Brooke] works harder than any player out there and never seeks any kind of attention or recognition for the many achievements she earns because of it,” Heck said. “I imagine that this diligence and humility has helped her succeed on the course. She is the person you run to when you feel like the world is falling apart and her kindness and warmth always seem to put everything back together.”

Stone’s teammate, Alden Wallace, who just finished her senior year at LSU, described Stone as a “down to earth and humble” person. “She’s such an uplifting teammate and friend,” said Wallace. “She never gets too high or too low [on the golf course] and has a quiet confidence about her that is so admirable.”

“Her [Jensen] competitive drive is what makes her who she is and has propelled her in so many great ways,” said Marissa Wenzler, a Kentucky senior, said of her teammate.

That drive also means that most things revolve around a player’s golf schedule. That’s the case for Kuehn, who adds – it’s not a bad thing.

“I'll work out in the morning with the team, go to class until around noon, then spend the entire afternoon at practice,” she said. “It's my happy place.”

“When I was 4, my dad started to take up golf and would bring me along,” Seay, a San Diego native, said. “I don’t know what pushed me toward golf. There is something about golf that, it’s different every time. There are so many ways to be creative on how you can approach different shots.” 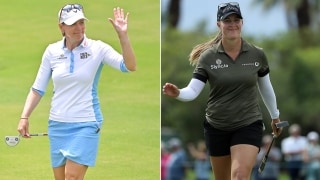 “My day-to-day revolves pretty heavily around golf, especially in the summer,” said Stone. “When I am at school, I typically spend half the day in class and half – or more than half – at the course.”

As a player, our love for the sport and desire to be great can create a murky line between personal and athletic lives. It can feel isolating for student-athletes as they try to find this balance, as they try to separate their sport from their identity, especially when so much of their lives are dedicated to the former.

Golf can be a sanctuary. But breaks – even from sanctuaries – are needed.

“Growing up, golf had always been an escape for me,” said Castle. “I never needed a break until May 2021. I was completely burned out.”

Following the ‘21 U.S. Women’s Open at Olympic Club, Castle had a rib injury that led to her to take a few weeks off from golf. “It was a blessing in disguise,” she said. “I listened to the doctor’s orders and didn’t touch a club for 2 1/2 weeks.”

She resumed practice three days before the U.S. Women’s Am. By that week’s end, she was champion. “I never believed in breaks or burnout until it happened to me,” Castle said. “Now I think breaks are awesome, because it helps you realize your love for the game and the reasons you play.”

Kuehn was forced to take breaks from golf in high school as she was a dual-sport athlete, competing on the tennis team at Asheville School in North Carolina.

“When [high] school started in August, I put my clubs up for a while in order to get back into tennis mode,” Kuehn said. “It was one of the best things for my golf game.”

Taking breaks should be a normal thing for athletes, but as Castle mentioned, many don’t see it that way. It can be easy for athletes with high goals to think: No days off.

Athletes can forget that one’s drive and motivation to succeed, combined with passion for the game, can consume them.

“Spending time with the people I'm close to helps me keep everything in perspective,” said Kuehn. “For me, it is easy to get caught up in thinking that golf is the most important thing in the world, because so much of my life revolves around it, but they are always there to remind me that a score doesn't define me.”

“There is a point of diminishing returns that extends beyond the point of getting better and you start to actually perform worse,” Seay relayed. “I started reflecting on how I was playing at one point a couple years ago. When I felt good in school and wasn’t super overwhelmed and was doing other things, I was almost able to be more committed to practice.”

Seay didn’t realize it then, but she had unintentionally achieved an equilibrium that worked for her. “Now it’s more intentional on how I can create that balance,” she said. “It definitely is not an easy thing to do, but it’s something that I’ve recognized.”

An individual NCAA champion has been crowned and on Wednesday a team will celebrate at Grayhawk Golf Club. It will be a dream come – for a few.

“I talk a lot with my teammates and other athletes about how we should take time for ourselves away from our sports, because it is so easy to be consumed by a busy schedule and let your sport become your identity,” said Kuehn. “It's always nice to talk to people who are feeling how I am, so these conversations always remind me that it's OK to feel overwhelmed, but they also help pull me out of that routine.”

“Golf is just a game,” said Castle. “A very difficult game, but there is more to life than it. It’s hard to realize that at the moment but you have to look at the bigger picture. Life is about the little things. The laughs, the jokes and the people.” 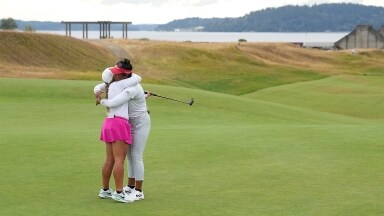 The defending champion and the top seed are out after the first round of match play at the U.S. Women’s Amateur. 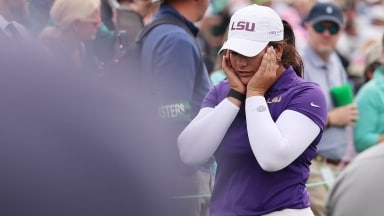 Latanna Stone plays a 'boring' style of golf. But it was almost - almost - good enough to win at Augusta National. 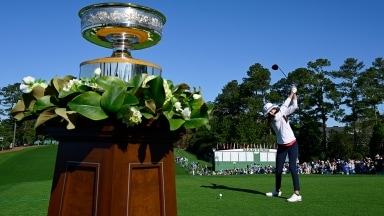