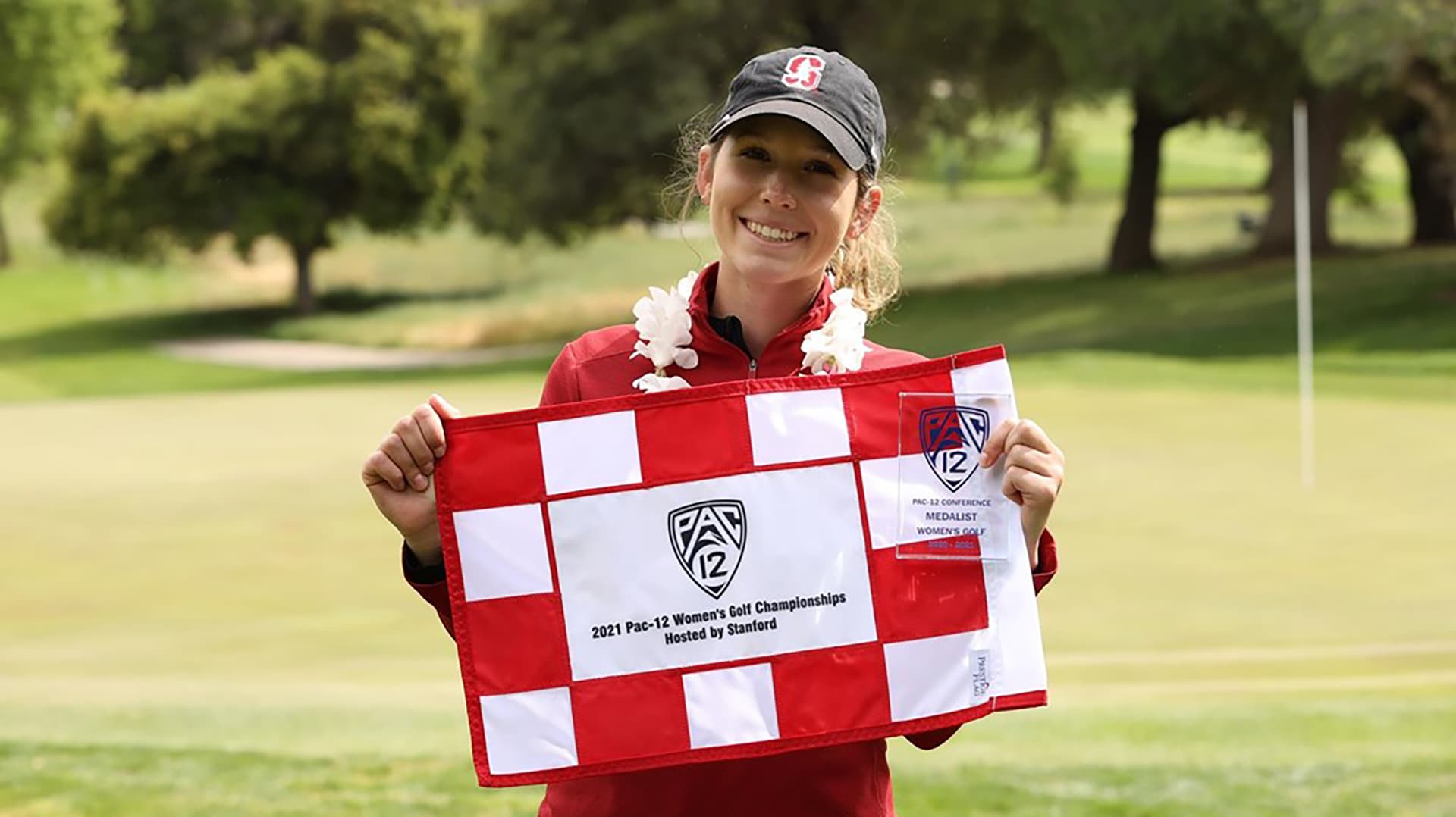 Freshman Rachel Heck and her Stanford teammates had to wait longer than any other Division I team in women’s golf to get their seasons started. Because of COVID-19 protocols and a delayed start to the quarter, Cardinal student-athletes weren’t allowed back on campus until mid-March. Add in a 10-day quarantine and the Stanford women didn’t play their first full-field event until March 1.

“I know I was frustrated not getting to go to college in the fall, so when it was finally time to come back in February and start playing, I was just so beyond excited to tee it up with the team,” said Heck, one of the top recruits in the 2020 class. “I wasn’t concerned about winning or anything like that, I was just happy to be playing golf.”

The three individual victories have just been a bonus.

Heck’s victory Sunday at the Pac-12 Championship marked her third win in six starts this spring. Heck also had finished outside the top 6 only once, and that was a T-11 showing at the Juli Inkster Invitational. Her two-shot conference triumph at Stanford Golf Course, amazingly, was just the storied program’s second Pac-12 individual title ever, and first since Mhairi McKay in 1997.

The young Cardinal squad also posted its best Pac-12 finish (runner-up) since winning in 2014. Heck is one of five freshmen or sophomores on Stanford’s roster. Juniors Aline Krauter and Calista Reyes, and grad student Ziyi Wang are the only other active players on the team – and all but Wang live in the same dorm building, on the same floor and down the same hallway.

“We all get along so great,” Heck said.

Heck may be new to college, but she’s quickly transformed into a leader for the Cardinal. That maturity has been boosted by Heck’s decision to join Air Force ROTC this semester, a move that Heck said has made her a better person, teaching her discipline and leadership.

When Heck committed to Stanford in 2017, she knew little about the military. She’s since had several friends do ROTC, and her boyfriend, Sam, is currently enrolled at West Point. Heck, though, decided on Air Force because of her interest in the intelligence side and the branch’s program for professional athletes to play their sport and still serve their country.

“My goal is to be in the reserves while playing on the LPGA,” Heck said.

While the majority of Heck’s classes are virtual, she has in-person instruction for ROTC every Wednesday morning in San Jose. On those mornings, Heck wakes up at 4 a.m., drives about 45 minutes to San Jose State, has class and then is back in Stanford by 10 a.m. for practice and other schoolwork.

“I feel like I’ve had the best mentality playing golf that I’ve ever had because I know that all my eggs aren’t in one basket and golf is not the end all be all of my life,” Heck said. “I’m at my dream school – finally. I’m with my best friends. I absolutely love ROTC and the Air Force, and I really want to serve. I have so many things that I love, so when golf doesn’t go well, it’s fine, and I’m not fazed by it. It’s something that I love and something that’s important to me, but it’s not the end all be all.” 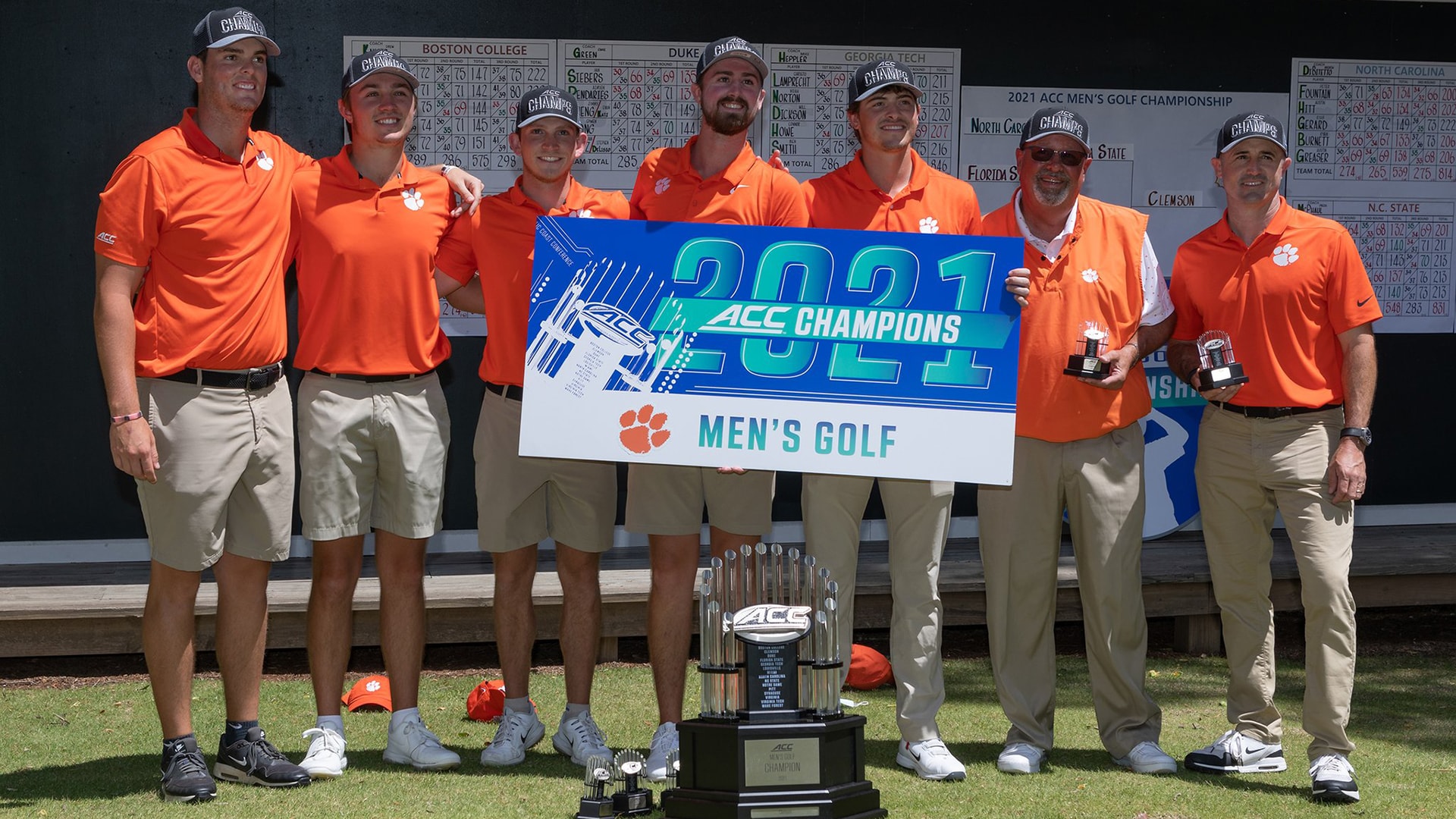 That’s been Clemson’s motto all spring as it looks to send legendary head men’s golf coach Larry Penley out with a bang. Penley plans to retire at the end of the semester, capping a 38-year career with the Tigers that has included an NCAA Championship (2003), a university-best 29 trips to nationals and 10 ACC titles.

Penley reached double-digit conference crowns on Monday at Capital City Club’s Crabapple Course in Alpharetta, Georgia, as Clemson showcased that gritty and steadfast mentality in a 3-2 victory over Florida State in the match-play final.

The second-ranked Seminoles led four of the five matches through nine holes behind some clutch putting, which included about a half-dozen putts made from outside of 25 feet.

“It was really setting up to be a butt-whooping,” Penley said. “At that moment, we could’ve done one of two things – fight and see what happens, or hand them the trophy.”

Clemson, ranked fourth by Golfstat, chose the former. Sparked by a 40-foot birdie bomb by Jacob Bridgeman that cut his 2-down deficit to Florida State star John Pak in half, the Tigers clawed their way back. While Brett Roberts and Frederik Kjettrup notched wins for the Seminoles in two of the first three matches, Bridgeman secure a point via a 1-up win over Pak and Kyle Cottam took down Vincent Norrman in the anchor match.

That left the second match between Clemson’s Zack Gordon and Florida State’s Greyson Porter to decide the team champion. Twenty holes wasn’t enough, but on the 21st hole, Gordon sank a 20-footer for birdie to give the Tigers the victory in Penley’s final ACC Championship.

“They have a lot to be proud of,” said Penley, whose team has won four times in seven events since beginning its season in January.

As Penley talked about his last ACC title, he was also getting ready for a small get-together with the team and other members of the athletics department at the R.W. Robinson Practice Facility (there would be cake!). The celebration, though, will be brief. Final exams are approaching for Clemson’s players, and three senior starters – Cottam, Turk Pettit and Colby Patton – are graduating later this spring. And there’s still work to do with regionals less than two weeks away.

Penley initially planned to hang it up after 35 years, but his overtime has paid off with one final shot at adding a second NCAA Championship.

“I’ve known for a couple of years that this would be my last season, but I told my seniors last year after COVID canceled the season,” Penley said. “I told them, ‘I want you all to really get ready for this coming season because it’s going to be my last. I’m going to go out with you guys. Let’s find a way to make this year very special.’”

With all grit and no quit, so far, so good. 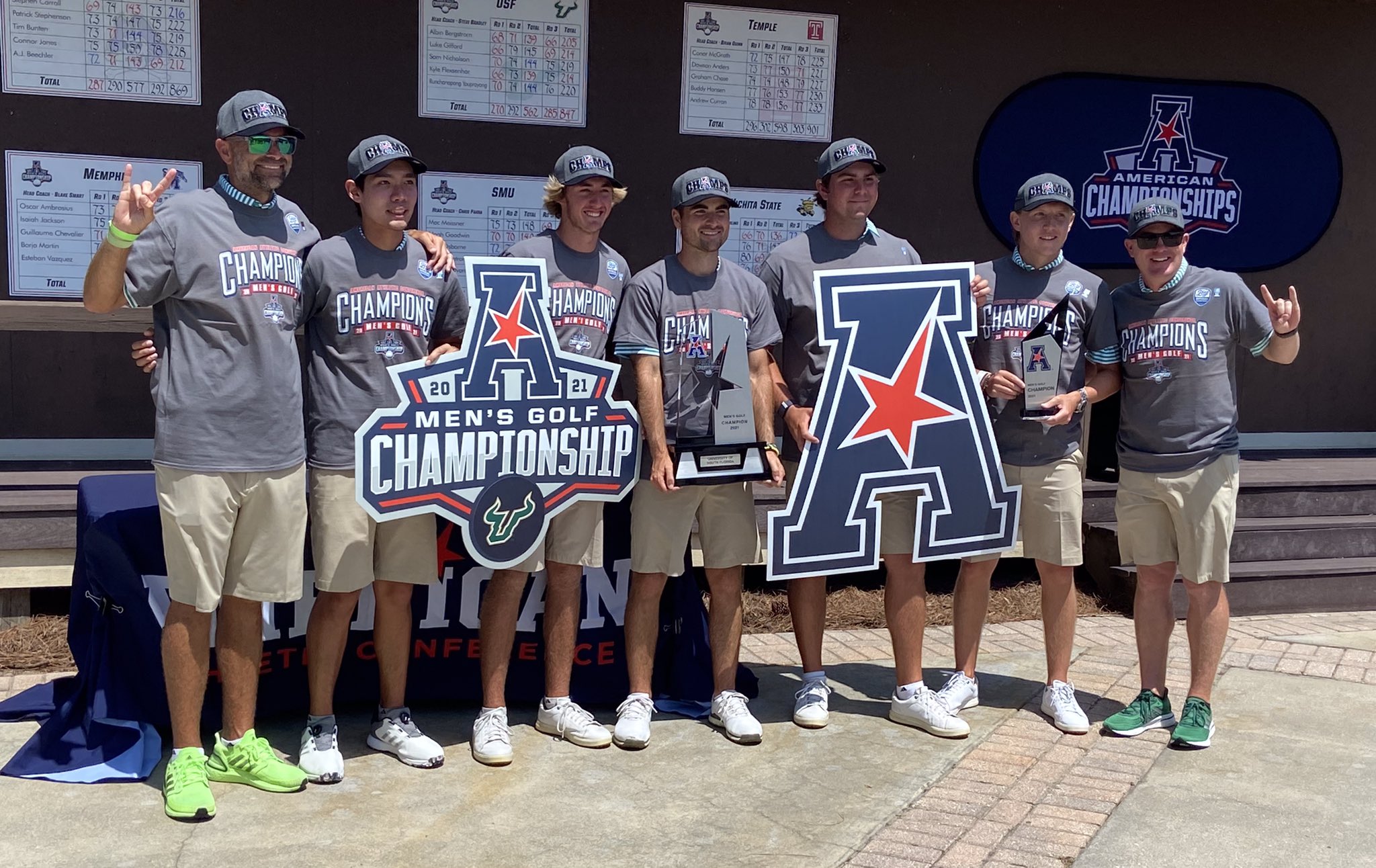 Running with the Bulls

The young Swede won a conference championship and then nearly secured a spot in a PGA Tour event over a six-day period at Southern Hills Plantation in Brooksville, Florida. It started with last Wednesday’s pre-qualifier for the Valspar Championship, where Bergstrom was one of two Bulls to make it through the qualifier (seven total entered). He then shot 11 under in 54 holes to win the American Athletic Conference medal by three shots while leading South Florida to its fifth conference crown in six tries.

Finally, Bergstrom advanced to a 4-for-2 playoff at the Valspar’s Monday qualifier before falling just short.

“It’s been a long week for him,” South Florida head coach Steve Bradley said. “He and the other guys might be a little physically and mentally drained.”

That’s all part of the plan, though, as Bradley challenged his young squad this spring after the NCAA got rid of the .500 rule for this season. Instead, of balancing his team’s schedule with both difficult and winnable events, Bradley beefed up the competition to better prepare the Bulls for the postseason.

In seven regular-season events since starting its season in January, South Florida didn’t finish better than fifth and was ninth or worse in three straight events entering AACs. But the Bulls also played the 22nd toughest slate in the country, according to the Golfweek/Sagarin rankings.

“In the past, we’ve won some tournaments where the fields weren’t necessarily great and we just never faced any adversity, so I wanted to change our mindset a little bit,” Bradley said. “These team is still really raw, to be quite honest, and not used to being on the big stage, and we got beat up quite a bit this semester as you see with the finishes. But I hope it pays off and we’re more mentally strong and prepared come regionals.”

After an important milestone Sunday, the Bulls will get some rest over the next week and a half as they shift some focus to final exams, which begin Saturday.

However, Bergstrom and teammate Runchanapong Youprayong will first tee it up in one more tournament: U.S. Open locals on Wednesday at Waterlefe Golf Club in Bradenton, Florida. 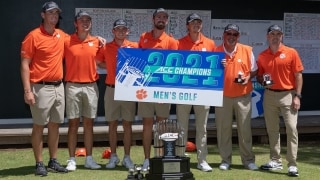 Here are the schedules and results for men's and women's Division I conference championships in 2021.

The NCAA reaffirmed its commitment to adopting new rules regarding student-athlete compensation for name, image and likeness.

With several states hitting the button on related legislation this summer, the NCAA released a statement late Tuesday night that it planned to have such rules modernized at some point this summer.

“The NCAA and its members remain committed to providing a path for student-athletes to benefit from name, image and likeness opportunities,” the NCAA Board of Governors said in a statement following its quarterly meeting. “As we have previously noted, we recognize the importance of taking swift, appropriate action to modernize our rules. We also must collaborate with Congress to create a legal and legislative framework at the federal level to support name, image and likeness within the context of higher education. With several state laws taking effect this summer, we will continue efforts to adopt expanded name, image and likeness opportunities as soon as advisable.”