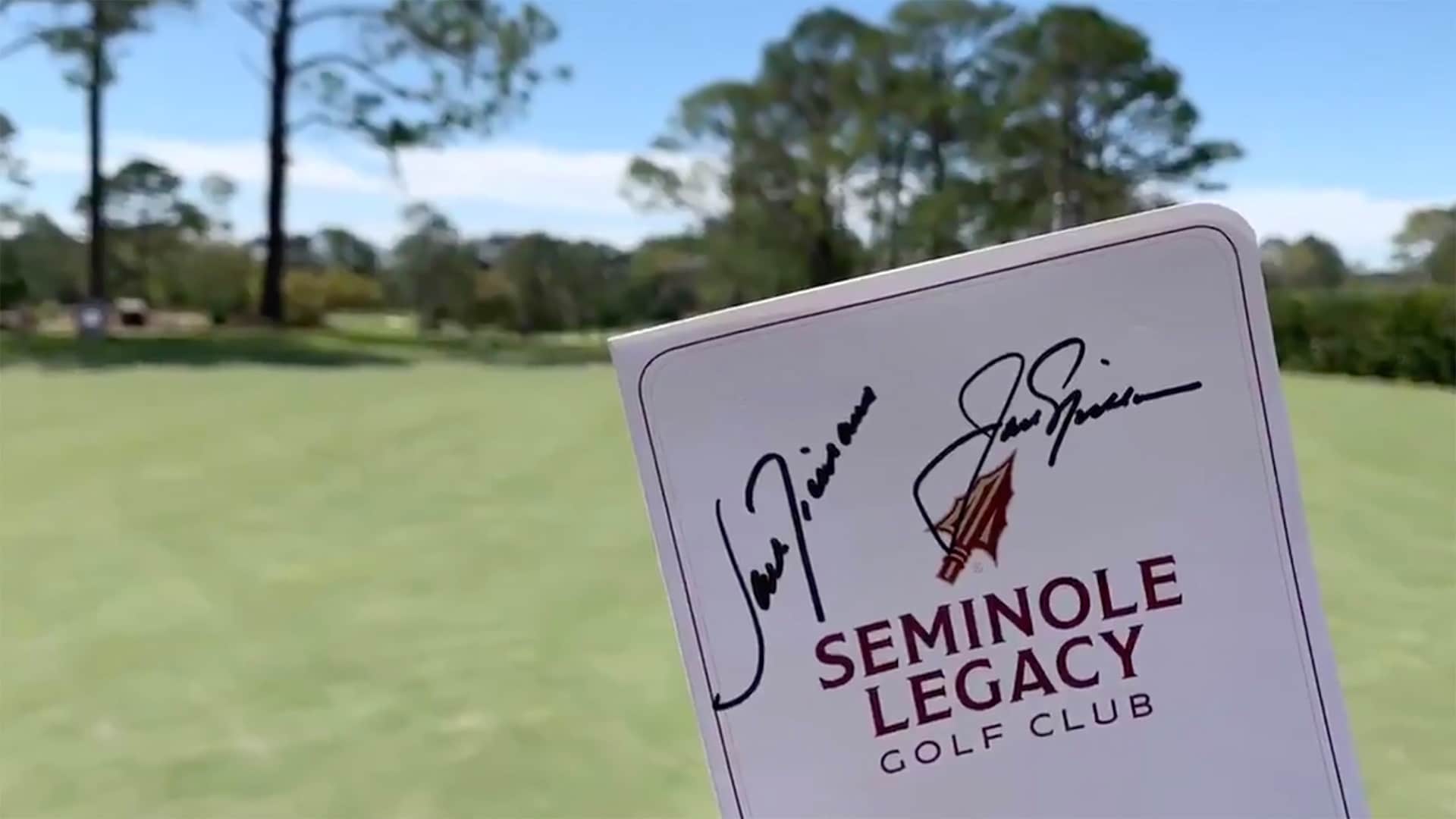 “It took two years to build,” Jones said, “but this is 17 years in the making. From the first time I saw it, I knew this place could be good.”

With the help of Nicklaus Design associates Chris Cochran and David Savic, the Nicklauses debated 17 different redesigns before rerouting nearly the entire existing course – only the first and 18th corridors are the same – and shrunk the total acreage of the property by more than 35 acres. Nicklaus also added a 12-hole par-3 course that will be accessible to only the golf teams and select membership.

The main golf course, though, is open to the public and will not only be playable to the average golfer, with few forced carries, but also challenging to the elite player, thanks to some difficult green complexes.

“I think it’s plenty hard,” Jack II said. “Dad was thinking I made it too easy.”

While Florida State’s home tournaments for the men’s and women’s team will move to Seminole Legacy next season, the club also has aspirations of hosting bigger tournaments, including NCAA regionals and championships and potentially a PGA Tour Champions event.

Added Thrasher: This will live on for generations.” 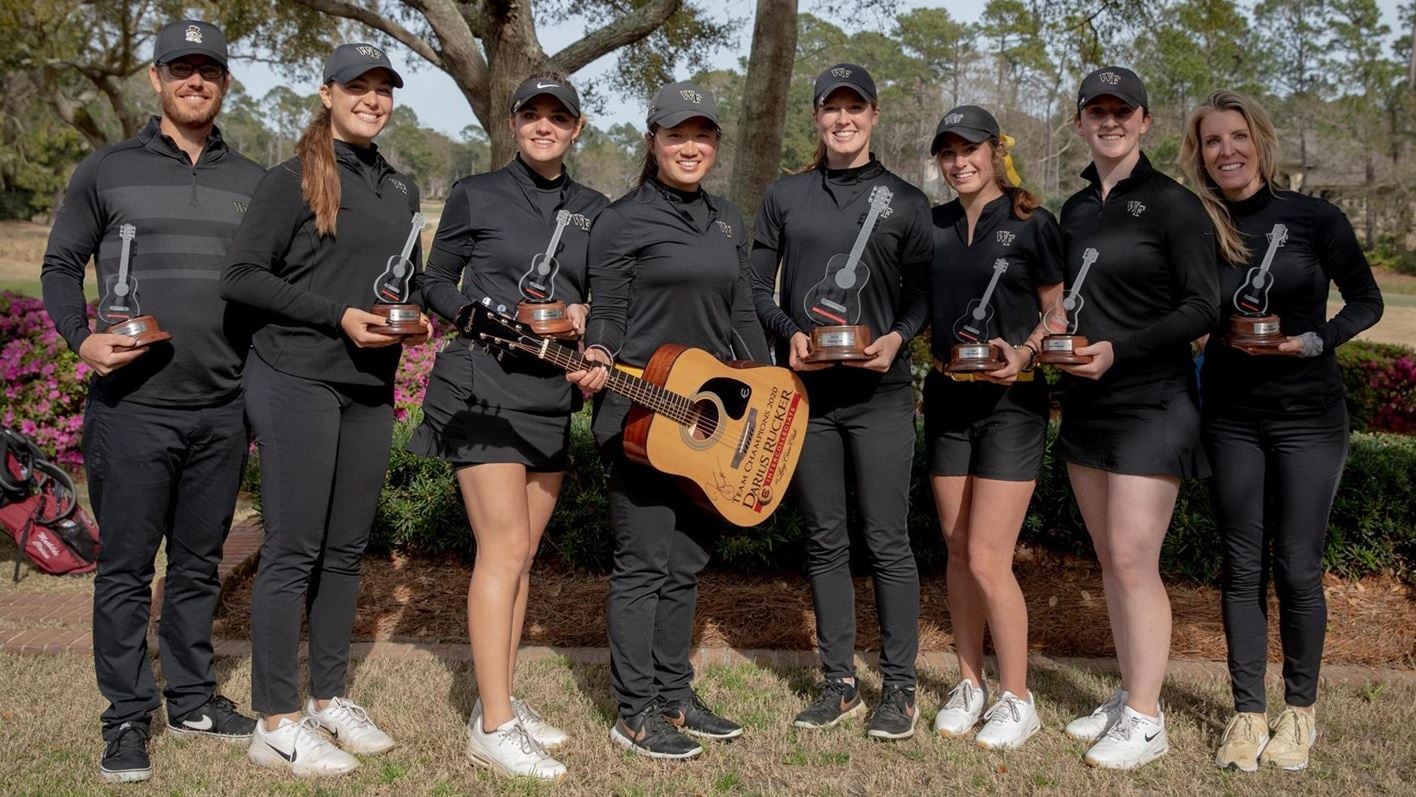 The five (plus one)

1. In the premier women’s event of the week, Wake Forest got back on track after an eighth-place showing at the Northrop Grumman Regional Challenge, winning the Darius Rucker Intercollegiate by a wide margin on Sunday. The seventh-ranked Demon Deacons, who won three times in the fall, shot 3 over and finished 26 spots better than runner-up Auburn. Wake topped 11 top-25 teams, including No. 1 Texas, which placed fifth. It was also a statement week for Wake junior Emilia Migliaccio, who shot 1 under to win medalist honors by a shot over Furman senior Natalie Srinivasan. Back in the lineup, Deacons freshman Rachel Kuehn tied for third to re-enter the Annika Award conversation. “To win that event with the level of competition that was there … probably the most impressive showing I've had in my coaching career,” said Wake head coach Kim Lewellen.

2. With their top three players back in the lineup, the 10th-ranked Arizona women had an unsurprisingly dominant performance at their home event, shooting 18 under and beating Oregon and New Mexico State by 22 shots. The Wildcats placed five players at T-6 or better, led individual Kailie Vongsaga, who won medalist honors by a shot over teammate Vivian Hou, who now has six finishes of T-4 or better this season.

3. San Francisco couldn’t hold on for the win Tuesday at the Lamkin Grips San Diego Classic, falling to sixth on the final day. Tennessee, meanwhile, fired a tournament-best 8-under 280 (along with San Diego State) to pick up its second win of the season by four shots over the Aztecs and third-ranked Arizona State. Fifth-ranked Texas A&M was fourth while No. 11 Arizona will take a big rankings hit after finishing 15th. San Fran’s Tim Widing won medalist honors by two shots over ASU’s Cameron Sisk, who is returning to form. BYU senior Peter Kuest added another solid finish to his resume with a T-5 showing.

4. North Carolina figures to return to the top 25 after a 13-shot victory Tuesday at the General Hackler Championship. Ryan Burnet (T-2) and Ryan Gerard (seventh) helped the Tar Heels to a 21-under showing, ahead of Liberty (8 under) and seventh-ranked Wake Forest (7 under). Host Coastal Carolina boasted the individua winner in Zack Taylor, who closed in 74 but still won by two shots. Taylor is the first Chanticleer to win this event since Andrew Dorn in 2014.

5. Oregon State won the Bandon Dunes Championship fairly comfortably on Tuesday, topping No. 12 Washington by eight shots. The real drama, though, came in the individual race as UCLA’s Devon Bling tripled his last hole, the par-5 third at Pacific Dunes, but managed to squeak out a one-shot win over Oregon’s Kevin Geniza, a Corvallis, Oregon, native.

6. Led by medalist Jacob Bridgeman, Clemson swept the top three individual places while rolling to the team title Tuesday at the Cleveland Golf Palmetto Invitational. The No. 22 Tigers finished at 27 under, 16 shots better than runner-up Virginia.

The latest Haskins Award and Annika Award watch lists are out. Pepperdine’s Sahith Theegala is the new No. 1 in the Haskins race while LSU’s Ingrid Lindblad tops the list of current Annika contenders.

On the men’s side, two Monday-Tuesday events highlight the schedule, the National Invitational Tournament in Tucson, Arizona, and the Valspar Collegiate in Palm City, Florida. For the women, Notre Dame’s Clover Cup starts Friday while the Valspar Augusta Invitational takes place over the weekend.