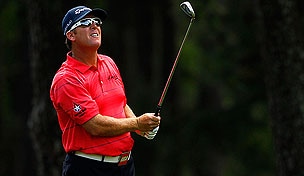 Getty Images
CHARLOTTE, NC - MAY 06: D.A. Points of the United States hits his approach shot on the tenth hole during the final round of the Wells Fargo Championship at the Quail Hollow Club on May 6, 2012 in Charlotte, North Carolina. (Photo by Mike Ehrmann/Getty Images)  -

PALM HARBOR, Fla. – Gary Gilchrist may be putting another horse in his ever-growing stable of thoroughbreds.

The Florida-based instructor has been working with D.A. Points the past few days, first at his personal facility, then at Innisbrook Resort, site of this week’s Tampa Bay Championship.

Points, who counts the 2011 AT&T Pebble Beach National Pro-Am as his lone PGA Tour victory, has made the cut in just two of seven starts so far this season, with a T-63 at the Humana Challenge and T-68 at the Honda Classic.