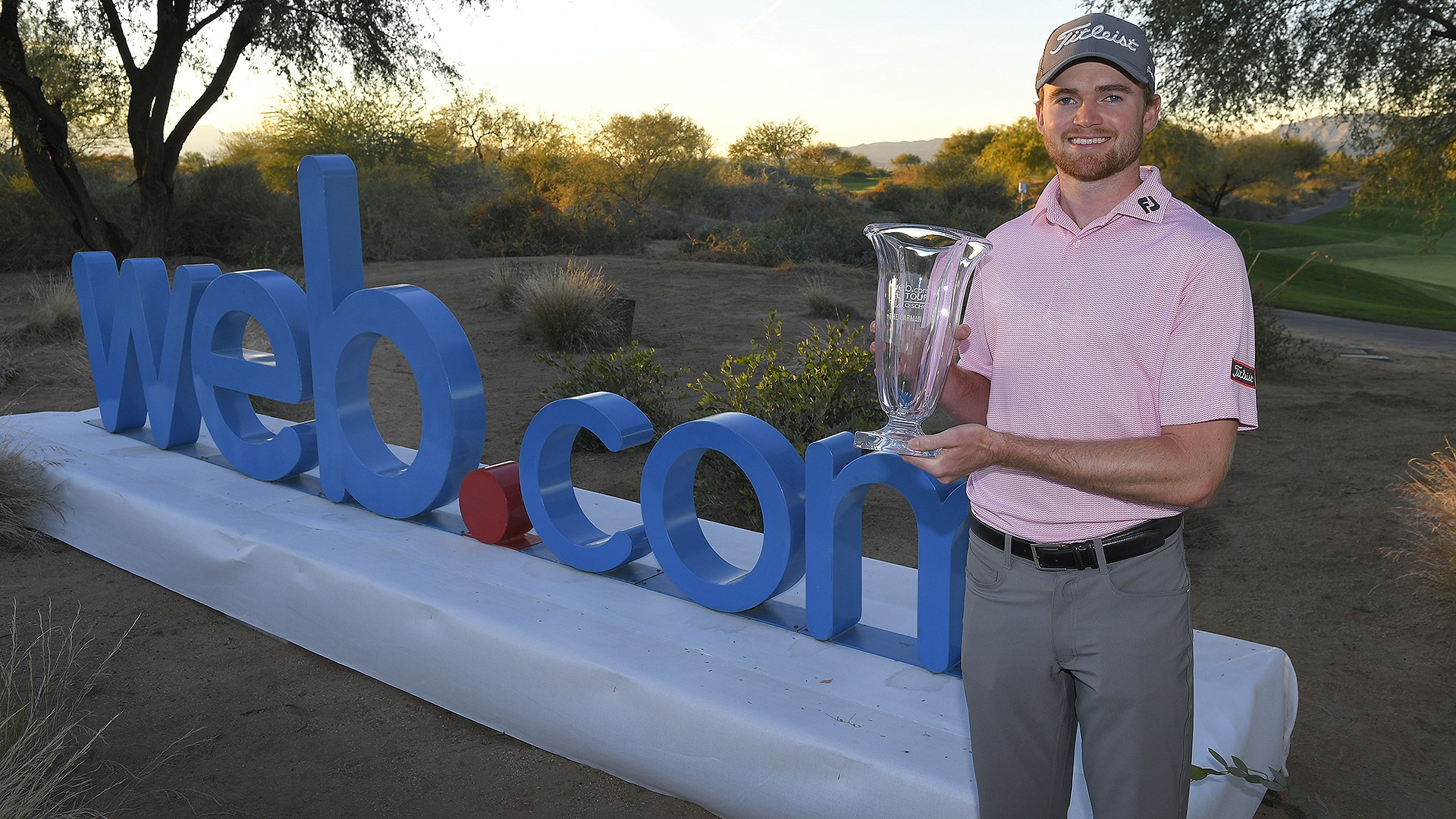 Danny Walker and Jimmy Stanger are both west coast guys — west coast of Florida, that is. From there, they traveled north and spent three seasons as teammates at the University of Virginia. Stanger, a year older, turned pro in 2017 while Walker entered the pro ranks this past summer.

Now, they will play together on the Web.com Tour.

Walker shot 9-under 63 Sunday in the final round of Web.com Tour Q-School's final stage, capturing medalist honors at 27 under in what was a 72-hole birdie-fest this week at Whirlwind Golf Club in Chandler, Ariz. In finishing atop the leaderboard, Walker earns fully-exempt status on the Web.com Tour in 2019.

"I’m super excited right now," Walker told PGATour.com. "My goal was to come top 10 this week, so I wasn't really thinking about winning. But I’m excited about it now obviously and relieved to have the week done. It’s a stressful week for everybody so it feels good to play well."

Walker received an exemption to final stage after winning the Mackenzie Tour's season finale this year and finishing seventh on the tour's money list.

Stanger finished two shots behind Walker in a tie for third at 25 under. A year ago at final stage, Stanger shot an 80 in the opening round, only to go 21 under in his final 54 holes. He still, however, had to settle for conditional status, finishing a shot out of the top 40 and ties.

That was Stanger's only heartbreak this past year. He also ended up three spots and $586 shy of making it to the Web.com Tour Finals - and keeping his card - last season.

"I think missing keeping my Web.com Tour card by one stroke last year in Portland was the best thing that's ever happened to me," Stanger said.

The top 10 and ties Sunday are exempt through the third reshuffle, meaning they'll receive 12 guaranteed starts next season. The top 40 and ties get at least eight starts. The rest leave Arizona with only conditional status.

BIG THINGS FROM THE NEXT BIG THING? Norman Xiong finished a shot back of Walker at 26 under, though he shot just 3-under 69 from the final group Sunday. Still, he'll play at least 12 times on the Web.com Tour next season.

Xiong, 20, entered the pros out of Oregon last summer with lofty expectations. After a 2017 where he won the Phil Mickelson Award, helped the Ducks to the NCAA final, won the Western Amateur and went 3-0-1 for the U.S. at the Walker Cup, Xiong followed by collecting Haskins and Nicklaus awards as college golf's Player of the Year in 2018.

"At 19 years old, I think Tiger (Woods) is the only guy I would defer to as being better than Norman," Martin told Golf Channel.com. "I haven’t seen much better than him at that age. He’s really that good."

While Xiong missed seven of his first nine cuts as a pro, this week's performance certainly is an indication of what to expect from the ultra-talented Oregon product.

SPEAKING OF PRODIGIES: Xiong wasn't the only junior-golf prodigy who finished in the top 10. Andy Zhang was tied for the 54-hole lead with Xiong and Stanger, but had to birdie the par-5 17th hole to avoid losing four guaranteed starts. He shot a final-round 71 to tie for eight at 24 under.

Zhang, 20, prepared nearly seven months for this moment. He decided last spring that he would forego his final two seasons at the University of Florida and focus on his upcoming pro career. Zhang officially turned pro last week and wasted no time finding a home for next season.

"It's good to go through the Web.com Tour first," Zhang said. "Tough fields every week, the scores are really low and you have to really mature your game to a point where you're consistent enough to play on the PGA Tour. I think this gives you a better chance of keeping your PGA Tour card in the long run."

In 2012, a 14-year-old Zhang, who had just years earlier moved to Florida from his native China, qualified for the U.S. Open at Olympic Club. He went on to have a stellar junior career before starring at Florida, where he won SEC and NCAA regional titles as a sophomore.

Now, he's ready to ply his trade and see how his game stacks up on the Web.com Tour. Zhang just hopes his stay his brief. He's ready to get on the big tour and join his peers from junior and college golf, guys such as Sam Burns and Cameron Champ, who each used last season on the Web.com Tour to earn PGA Tour cards.

"It's a very competitive time for our age," Zhang said. "Playing against those guys growing up, always battling at every single stage, I can't wait to get out there and compete against them."

DECISION TIME: Ole Miss senior Braden Thornberry opened the week with a 10-under 62, but shot just 4 under in the final three rounds to tie for 74th.

Thornberry said entering the week that he would turn pro immediately if he finished among the top 40 and ties. Now, he has a tough decision to make: Try to make the most of his conditional status or return to school and try to add to his college accolades. The McCormack Medal winner has starts in next summer's U.S. Open and Open Championship, provided he remains amateur for them.

CHIP SHOTS: Former Texas standout and 2017 Walker Cupper Doug Ghim was part of the five-man group at T-3. Ghim, the low amateur at last season's Masters, shot 65 Sunday. He has made 10 starts as a pro, but none yet on the Web.com Tour. ... After nearly shooting 59 in Friday's second round, Oklahoma product Michael Gellerman, held on to finish T-3. ... Brad Fritsch, who served a suspension earlier this year for violating the PGA Tour's anti-doping policy, continued an inspired redemption tour by sharing eighth at 24 under. His final-round 62 was only equaled by Tim Wilkinson (T-16). ... Finishers outside the top 10 but inside the top 40 and ties included U.S. Amateur Public Links champions T.J. Vogel (T-16) and Byron Meth (T-22); Cody Blick (T-25), who had his clubs stolen prior to the final round; and three recent Walker Cuppers, all a shot clear of the top 40 cutoff at T-34 (Jordan Niebrugge, Scottie Scheffler and Lee McCoy).