Toms hopes for captaincy in the future 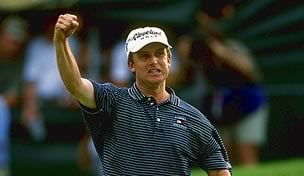 LA QUINTA, Calif. – When the call came, David Toms was in a duck blind at one of his favorite hunting spots in Arkansas. On the other end of the phone was new PGA of America president Ted Bishop.

That December morning they talked for a while, very civil, and Bishop was complimentary of Toms as a player, person and figure in the golf community. Ultimately, it was relayed that Bishop and the PGA were going in another direction with their search, that they appreciated Toms’ interest in the position. Typical correspondence between boss and prospective employee.

And a few days later, in the heart of downtown New York City, live on NBC’s “Today” show, Tom Watson was unveiled as the next U.S. Ryder Cup captain.

“I want to be a captain some day, but it wasn’t like it was disappointing,” Toms said Tuesday after a practice round at the Humana Challenge. “Maybe at some point I’ll get that opportunity, but for now I wasn’t disappointed at all.”

Surprised, perhaps. Toms fit the mold of recent Ryder Cup captains. He was in his mid-40s, with a major championship – a PGA, no less – to his credit, and was still semi-active on the PGA Tour, enough, at least, to still be chummy with the players. If nothing else, he was the only candidate to officially file paperwork with the PGA expressing his interest.

In a letter, Toms wrote that he could do a good job, that he knew all the players, that if the organization went in their usual sequence – if the PGA didn’t break the mold – that he would gladly take the honor, he would do the best job he could.

“It wasn’t like I asked for the job,” Toms said. “I just said that I would definitely not turn it down and thought I could do a good job.”

Little did Toms know, however, that the PGA had been courting Watson for 13 months, even before the U.S. team and captain Davis Love III endured a heartbreaking loss at Medinah. Bishop was so determined to land Watson, in fact, that he produced an 85-page document detailing the reasons why the eight-time major champion, who will be 65 when the matches begin, should get the gig at Gleneagles. Toms said he thought he was a candidate only because he had read and seen on TV that he was a candidate.

“I wasn’t surprised with the pick that they wanted to shake it up,” he said, but now a larger question looms: Has the formula been rewritten? How will captains be selected in the future?

If Watson is successful at Gleneagles, if the Americans win on foreign soil for the first time in two decades, then what? The race for the 2016 Ryder Cup captaincy may be even more intriguing.

Maybe, Toms said, this is a sign that there’s more to his career, to his life as a 46-year-old father of two.

Toms still wants to play the Tour. Hey, Darren Clarke withdrew his name from Ryder Cup consideration this year because, essentially, he doesn’t want to waste two years of his career – he thinks he can still compete. So does Toms.

Back home, he has started an academy for juniors in Shreveport. One of his kids, 15-year-old Carter, has ambitions of playing in college.

“It was all fine, really,” Toms says of the PGA’s decision. “I’m a busy man, to be quite honest, with a lot of things going on. Everything happens for a reason. I’ll be fine.”