Despite Valspar cancellation, work – and golf – continues at Innisbrook 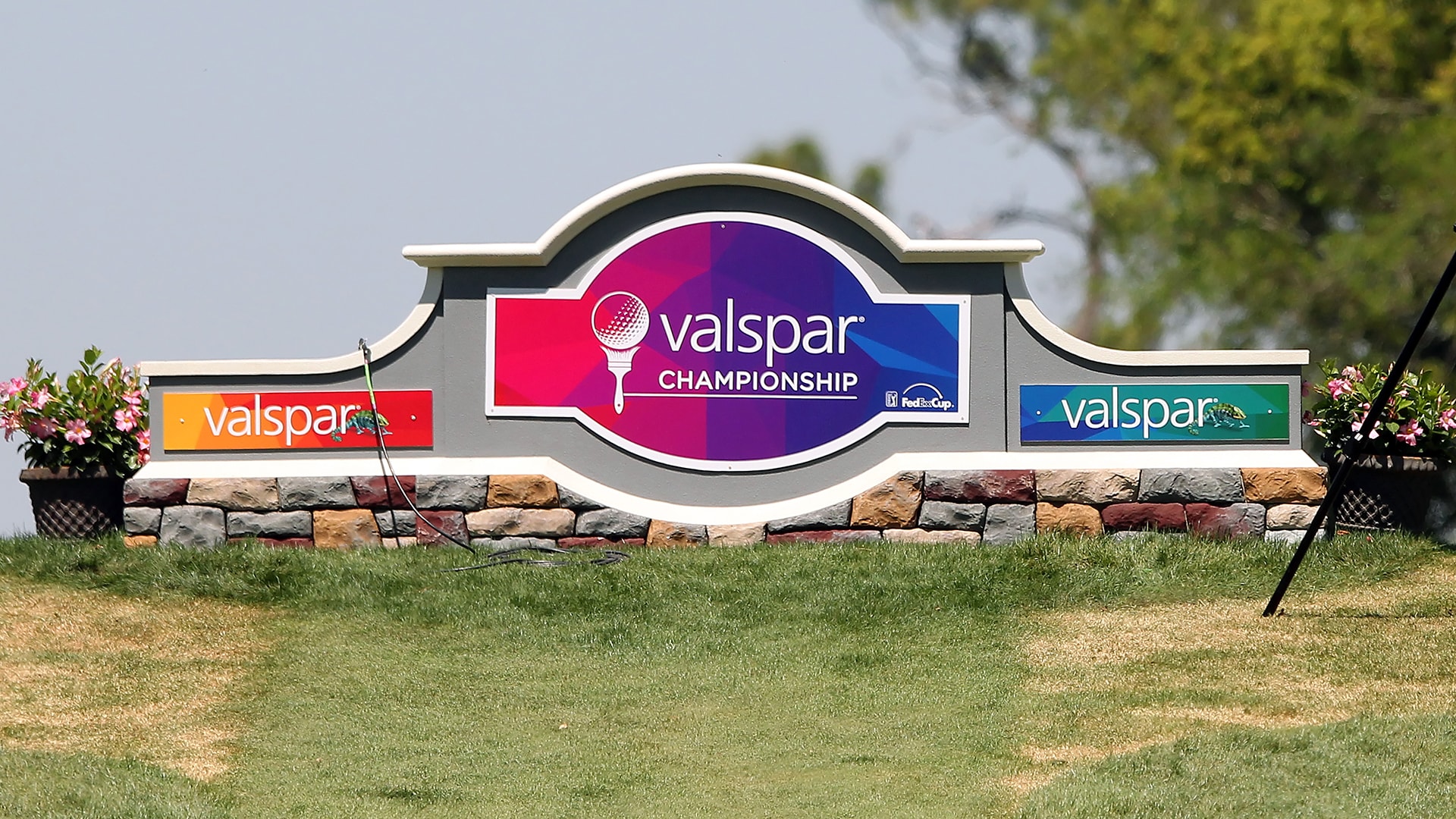 PALM HARBOR, Fla. – This was the type of crisp morning that tournament directors like Tracy West dream of. An azure sky, low humidity and barely a puff of breeze. The only chance of precipitation stemmed from the bits of pollen raining down from the overhanging trees that line the Copperhead Course at Innisbrook Resort.

This should have been an idyllic start for the Valspar Championship, with West at the helm and thousands of fans pouring in to follow leaderboards dotted with names such as Koepka, Thomas and Spieth. Months of planning and preparation would have come to fruition without a cloud in sight.

Thursday morning, right about the time that Paul Casey would have begun his quest for a three-peat, the tee sheet was just as full as West would’ve expected. But rather than PGA Tour pros, the morning wave consisted of local members and resort guests taking advantage of an unexpected opportunity to play a course in pristine Tour condition.

What should have been the tournament’s opening round was anything but, as the Valspar became one of 11 Tour events either canceled or postponed because of the growing COVID-19 pandemic in a whirlwind turn of events that West is still trying to process.

Friday of the Arnold Palmer Invitational, West was patrolling the driving range at Bay Hill trying to squeeze some last-minute commitments out of players like Phil Mickelson. Less than a week later, her tournament evaporated.

According to West, Monday and Tuesday of last week – “advance week” in tournament speak – were just like any other year. She was stationed at the course in the Tampa area, while another tournament representative, Hollis Cavner, was on-site at The Players. Coronavirus was on the radar but hardly seen as a clear and present danger to event operations.

“Everyone knew that we should be making sure we have plenty of hand sanitizers and extra things, and we had been working to put that in place,” West said. “We were really doing what the whole country was doing. Just trying to find as much stuff as we could. But at that point, we never imagined that we wouldn’t have a tournament.”

As with many sports and industries, the point of inflection for Valspar officials came the night of March 11, when NBA star Rudy Gobert tested positive for the virus. The NBA quickly suspended its season and the entire sports landscape began to crater.

Golf felt an impact, albeit a delayed one. West explained that she was included on multiple calls with Tour officials in Ponte Vedra Beach during the day Wednesday, the last of which culminated with the decision to proceed as planned for the opening round of the Tour’s flagship event.

“Even at that point, we still thought we would play. But it was more along the lines of just trying to make additional plans, what other supplies did we need,” West said. “And then obviously all heck broke loose on Thursday.” 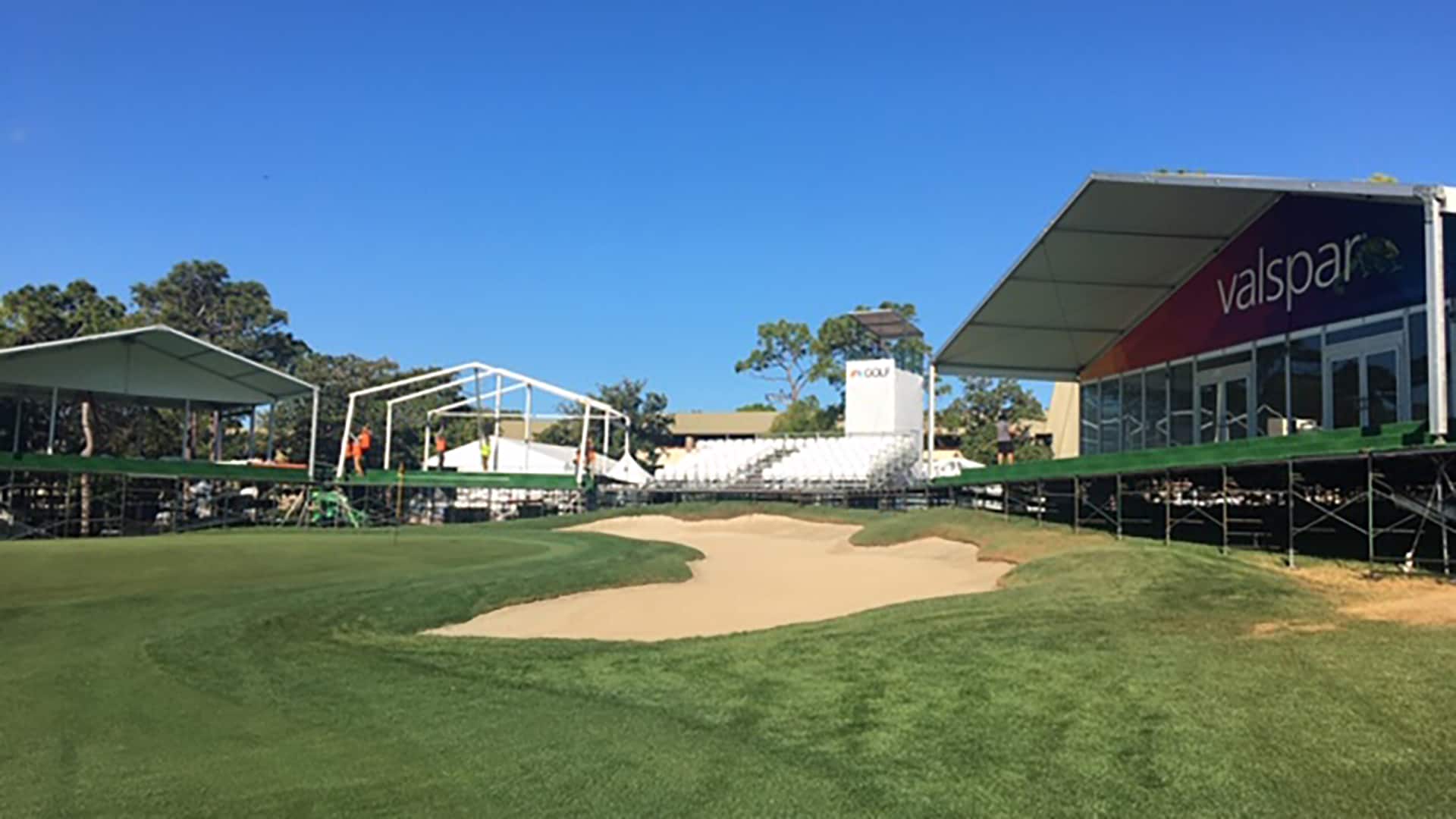 March 12 is a day that won’t soon be forgotten in the game, a surreal spin of the Earth that started with fans pouring into TPC Sawgrass and ended with the Tour putting competition on a one-month hiatus. In between was a 10-hour window in which West was told that her tournament, along with the two following it on the calendar, would still be played – but without fans.

That unexpected curveball sparked dozens of unforeseen discussions. West had to act in short order to “cancel things that you could still cancel.” Shuttle buses. Food orders for concession stands. Security forces that were contracted to search fans who would no longer be in attendance. Tournament week concerts with country headliners Chris Young and Big & Rich were quickly scrapped.

Officials debated everything from which groups of volunteers and marshals would need to remain on-site to what the electronic billboard messaging would need to say in the main spectator parking lots, should any fans show up a few days later still unaware of the tournament’s fan-free contingency.

In between all that, the actual business of the tournament continued. West shared that during the opening round of The Players, the last competitive round of golf on Tour for the next two-plus months, she picked up commitments from both Jordan Spieth and Patrick Reed, who memorably dueled in a playoff at Innisbrook in 2015. They were set to join a field that already included three of the world’s top 5 in Brooks Koepka, Justin Thomas and Dustin Johnson.

“We were starting to get commitments from guys that had told me they weren’t going to play,” West said. “We already had a tremendous field, and it was getting even stronger.”

A chaotic afternoon bled into the evening, and around 9 p.m. West told staffers to head home, catch up on emails and get some rest. But a few minutes later, she received a text from Tour officials asking if she could quickly join a conference call that would also include representatives from the Valero Texas Open.

West’s reaction proved prescient, as she was told of a decision that would be released to the world a few minutes later: the Tour had canceled both events, along with the WGC-Dell Match Play and the final three rounds of The Players. This week came the decision to cancel four more events, and the year’s first two majors have been postponed amid the growing global crisis.

Those decisions mean that West has plenty of company among tournament directors who have felt the rug pulled out from under them by unprecedented circumstances. But none were as close to the finish line as the Valspar, which was expecting early player arrivals within a matter of hours.

In the moments after the cancellation, West’s first calls went to contacts at both Valspar and Innisbrook to ensure they heard the news from her. After that, she told staff members to meet at the course at 7 a.m. Friday. 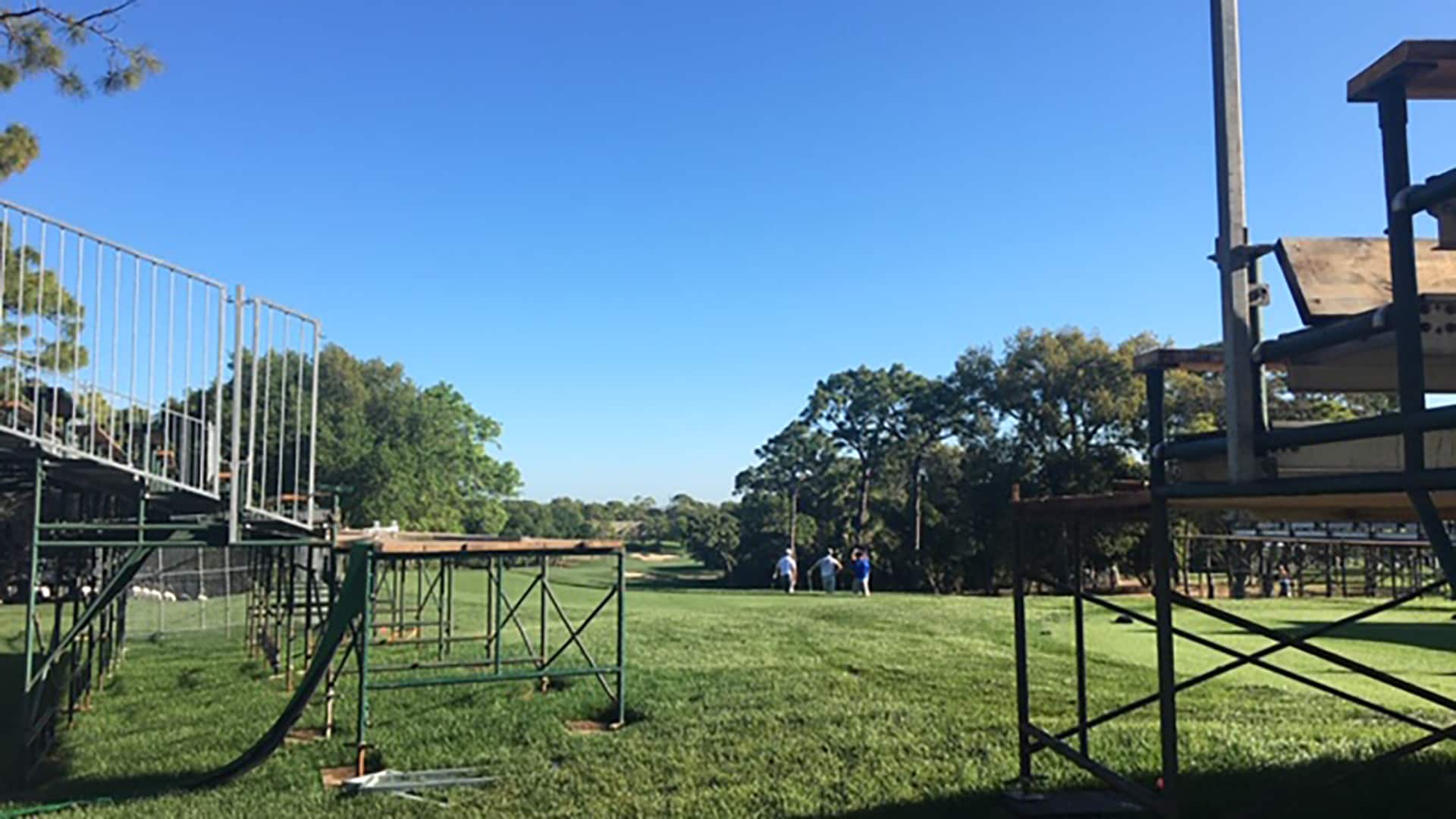 That work included the physical, as workers quickly began tearing down the grandstands, leaderboards and various other pieces of infrastructure that had been erected for the event. West expects that process to take another three weeks before the Copperhead Course returns to its normal appearance.

But the more pressing needs were tied to the balance sheet. There’s no way to square a year’s worth of expenses with zero tournament-week revenue, so officials will try to curb the losses wherever possible. They’ll still make a donation to Copperhead Charities, the local charitable arm of the tournament, based on pre-existing pledges and contributions. But West expects it might only be around half of the $2.2 million figure that was donated from last year’s event.

With the layout tournament-ready and in its best condition of the year, the course won’t go to waste. As soon as the Tour nixed the Valspar event, the course was turned back over to Innisbrook for resort and member play. With coronavirus concerns sharply curbing domestic travel, the resort created a $199 stay-and-play package that included a night on property and a round on the Copperhead at its absolute best.

The resort continues to follow all state and local mandates amid the pandemic, including limiting restaurant seating to half capacity. The course itself has taken multiple steps to address the situation: range bays are now separated by 6 feet, with piles of balls instead of buckets. Flagsticks are not to be handled. Cups on the practice putting green have been turned upside down so balls can be retrieved without being touched.

Gone are bunker rakes, along with the sand containers and drink coolers typically straddling each cart. Players are allowed to walk if they feel more comfortable, a break from normal resort protocol, and staff members wearing latex gloves are sanitizing golf carts after every use.

“We’ve addressed every possible touch point for the golfer during the round,” said Innisbrook director of golf Bobby Barnes. “Steering wheels, cup holders, you name it. We are taking the situation seriously and presenting the best possible experience for members and guests.” 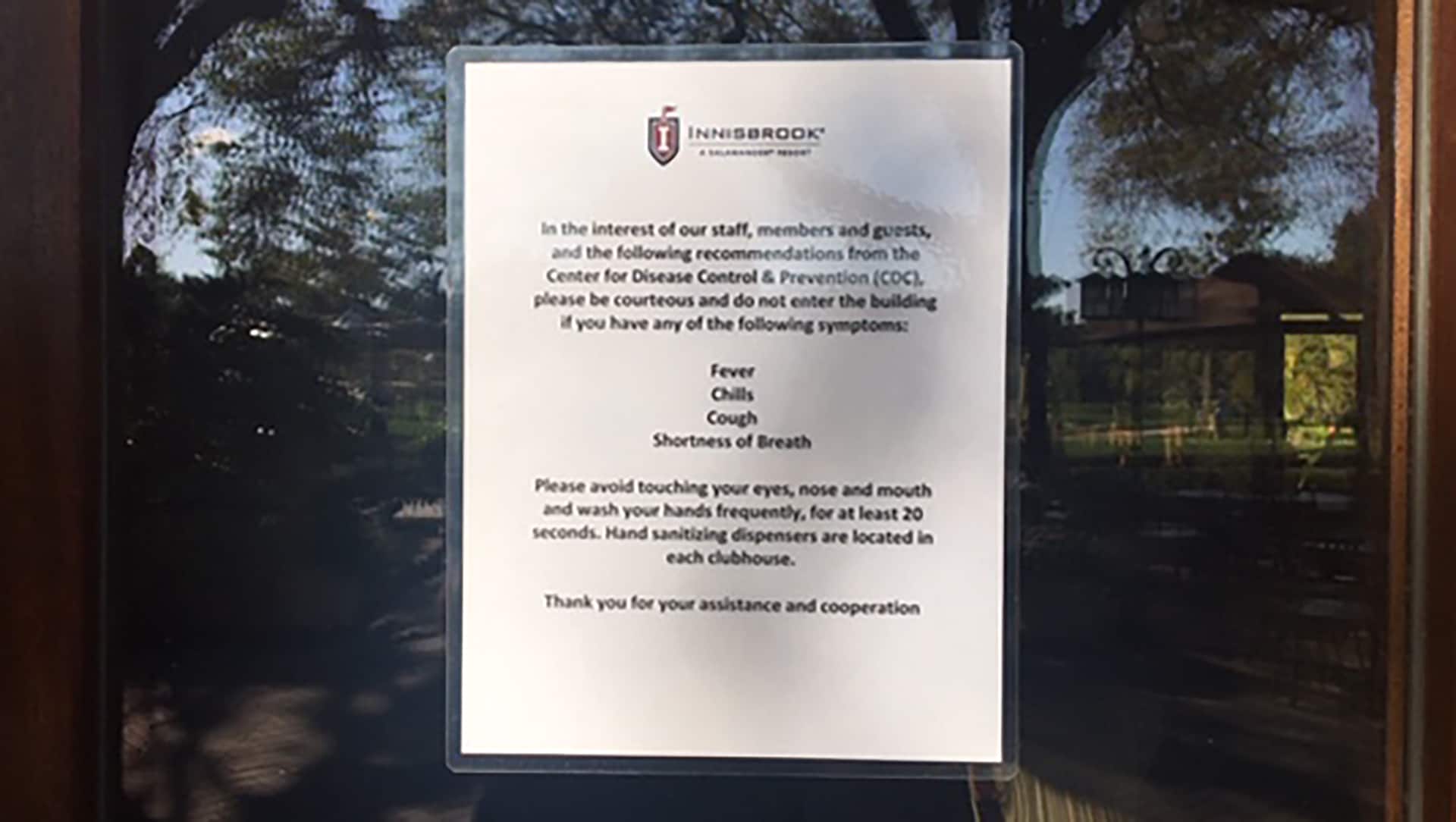 While federal and state officials continue to discourage a variety of social activities, especially in large groups, golfers have responded with vigor to the adjusted experience being offered at Innisbrook. Among them was John Lisenbee, a 55-year-old exterminator who lives in the area and typically plays at nearby Seminole Lake Country Club.

Lisenbee and seven other club members pounced at the opportunity to play the Copperhead at a discounted $100 rate, having inquired with a resort contact regarding a tee time “about four minutes” after news of the Valspar cancellation spread.

“We’re playing golf, man. If we can’t do anything, we’re playing golf. We’re junkies,” said Lisenbee, a 4-handicap. “Every single guy you see here, if they close the golf courses down, we’re in trouble.”

Indeed, Lisenbee had plenty of company on the first tee Thursday morning. As sounds of drills and forklifts signaled workers actively deconstructing grandstands and hospitality tents across the course, Barnes confirmed that the Copperhead tee sheet had been entirely full since Monday and was booked through the weekend.

Given the precautions put in place by course officials, Lisenbee had no hesitations about teeing it up in the time of social distancing as positive virus test results continue to mushroom across the nation.

“We’re outdoors. We’re 300 yards away from most people, except for the guy we’re riding in the cart with,” he said. “If it happens, it happens. We’re not cooped up in the house. We’re not sitting at home with our wives or children or dogs or whatever. We’re actually outside in an open-air environment. I mean, what better place can you possibly be?”

But while Lisenbee and others indulge in a rare opportunity to tackle a Tour-level venue in peak shape, the work continues for West and her staff. West wryly noted that the long hours since last Thursday’s decision have meant this week feels very similar to a typical tournament week. Minus, of course, the golf.

The Valspar will be back in 2021, albeit with a new date in late April. But the work of sorting through the fallout from the 2020 event that never got off the ground will continue for some time.

“In a month from now, when we figure out where we are financially, we take care of our sponsors, we get off the golf course, I think at that point we’ll have an afternoon where we sit down and wonder what could have been,” she said. “But not yet.” Woods: Valspar win would have been 'too soon'

Tiger Woods' 2018 could have looked entirely different had he closed out an earlier opportunity. 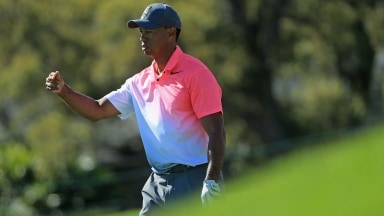 Millions of fans watched Tiger Woods’ run last week at the Valspar Championship – and that included two very interested observers in his own home. 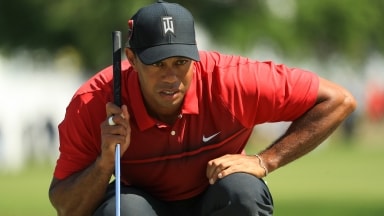 Cut Line: Woods all in for Augusta

By playing the Valspar Championship for the first time, Tiger Woods showed that he is totally committed to preparing for the Masters.