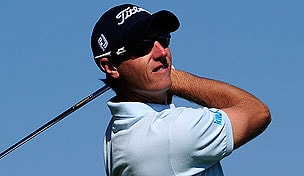 The longest hitter in golf isn’t Bubba or DJ.

No, it’s Nicolas Colsaerts, who lived up to his “Belgian Bomber” moniker Thursday at the Volvo Golf Champions in South Africa. The 30-year-old European Ryder Cupper unleashed a prodigious blast during the opening round that traveled 419 yards.

Joked Ernie Els, who was playing alongside Colsaerts: “They should put a plaque down. I was coming from a different zip code. And I’ve got to compete against these animals!”

At 318.6 yards a pop, Colsaerts – “The Muscles from Brussels” – was the longest hitter on either the European or PGA Tour in 2012. (Watson averaged a PGA Tour-best 315.5 yards last season.) This latest bomb came at the downwind par-5 third hole at Durban Country Club.

“I’ve been coming here since 1986 and I’ve never seen a ball there – nobody has,” said Els, who nonetheless had the advantage after Round 1, opening with 4-under 68 to Colsaerts’ 73.