Couples: Coolest night of my life 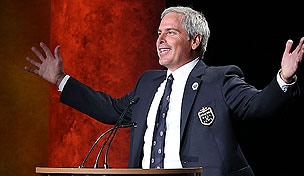 ST. AUGUSTINE, Fla. – So many mountaintops.

So many different paths leading to them.

Fred Couples, Colin Montgomerie, Willie Park Jr., Ken Schofield and Ken Venturi carved distinctive careers climbing their way to one of golf’s most majestic peaks Monday as the newest class of inductees into the World Golf Hall of Fame at the World Golf Village.

Couples, 53, got to the top of the game with a swing as deceptively powerful as his personality.

With an effortless, silky move that belies the strength that earned him the nickname “Boom Boom,” Couples played his way to 15 PGA Tour titles, including the Masters in 1992 and two Players Championships (1984, ’96). He was the first American to go to No. 1 in the Official World Golf Ranking.

Couples, though, won hearts even more easily than he won trophies, and he showed why in a clever and emotional speech that was classic “Freddie Speak.”

The induction’s importance to Couples was clear in his final words and on his face as he left the stage.

“Thanks for sending a kid from Seattle to the Hall of Fame,” Couples said. “This is the coolest night of my life.”

That final sentence left him in tears.

With his movie-star looks, his easy, unaffected manner, Couples became one of the most popular players of his generation. His appeal radiated beyond his record. He made his fame winning as the coolest guy in golf.

CBS’ Jim Nantz, who was Couples' teammate at the University of Houston, put the sentiment in other words.

“Fred’s the coolest, most casual, and one of the most gifted players the game has ever known,” Nantz said. “The cool thing? He’s never tried to be cool. It’s always been Fred just trying to be Fred.”

Couples set the table after taking the stage to a standing ovation.

“There’s a big question,” Couples said. “How did I get here?”

Couples proceeded to explain that he was 9 years old growing up in Seattle when he caddied for Steve Dallas, his older brother’s friend. Dallas gave Couples a small set of clubs “from some supermarket” with a plastic driver and set of 5-, 7- and 9-irons and a putter, all in a canvas golf bag. Couples took his game to Jefferson Park and “played every day.”

Before he set out to the course every morning with his bag slung around his shoulder, Couples’ mother would give him $5. It was enough for the $3.50 green fees with $1.50 left for a hamburger and a Coke. He joked the daily allowance miffed his sister, Cindy.

Couples choked up briefly in his speech, saying he was 14 when he was inspired to another level watching a mesmerizing pro give a clinic in Seattle.

“The gentleman’s name is Lee Trevino, who has been a mentor and someone I love,” Couples said.

Montgomerie, 49, started his climb to the top growing up in Scotland.

“I started playing at the grand old age of 5 in Troon, Scotland,” Montgomerie told the Hall of Fame gathering. “Mind you, in Troon, that's about all you do.”

Montgomerie was a force on the European Tour, winning 31 events and eight Order of Merit titles, including seven in a row (1993-99). No British player has won more European Tour titles.

“In many ways, Colin Montgomerie is the European Tour,” European Tour Chief Executive George O’Grady said. “He brought drive, passion and commitment to the game, but more than anything, he brought leadership.”

Montgomerie never won a major championship, but he was a Ryder Cup star.

With a stellar 20-9-7 record, Montgomerie helped Europe win five of the eight Ryder Cups in which he played. He was never beaten in singles (6-0-2).

“I hate to lose,” Montgomerie said in his Hall of Fame news conference before the ceremony. “I had a dramatic fear of losing.”

Despite all his success as a player, Montgomerie said his proudest achievement was leading Europe to a Ryder Cup victory as the team captain at Celtic Manor in 2010.

Venturi, 81, won 14 PGA Tour titles with the highlight of his career coming in his victory at the U.S. Open at Congressional in 1964. In 100-degree temperatures, with heat exhaustion plaguing him, Venturi staggered to the win over 36 holes on the final day. He would make another mark on the game as a CBS golf analyst for 35 years.

Unable to attend the induction ceremony, Venturi is recovering from surgery and an infection in his spine. He is hospitalized in Palm Springs, Calif. Nantz spoke for Venturi.

“I love Ken Venturi as a friend and a mentor, and I'm heartbroken he's not standing here right now,” Nantz said. “I think most people know, Kenny has been ill for some time now. He's been in the hospital out in Palm Springs for two months. However, I'm going to tell you, the prognosis is still good. He can get through this. I really believe it in my heart.”

Venturi’s son, Matt, said his father is eager to accept a World Golf Hall of Fame offer to make his speech next year.

Schofield, 67, one of three Scots inducted Monday, became the European Tour’s executive director in 1975 and reigned until 2004, a time of unprecedented growth for the tour. When Schofield came aboard, the European Tour schedule featured just 17 events. There were 45 on the schedule when he retired. He also oversaw the creation of the European Challenge Tour and the European Senior Tour.

Schofield also steered the European Tour toward global expansion, opening doors that would lead the tour to Africa and Asia. Schofield took the tour off the continent for the first time in 1982 with the start of the Tunisian Open.

“To be nominated through the lifetime achievement category into the Hall is the proudest moment of my professional career,” Schofield said.

Park Jr., a Scot who died in 1925, won the British Open twice. He’s the son of World Golf Hall of Famer Willie Park Sr., who won four British Opens, including the inaugural championship in 1860. A pioneer in club and ball design, Park Jr. made his mark beyond that of a player. He was also an architect and writer.

“Think families, and you think of Davis Love, father and son; the Harmons, Claude and his precocious progeny,” said John Hopkins, The Times of London golf writer who presented Park for the family. “You think of the Allisses, Percy and Peter. Perhaps you think of Old and Young Tom Morris and Willie Park Sr. and Jr., the Montagues and the Capulets of their time, at least as far as their rivalries were concerned.

“The Morrises won more Opens than the Parks, eight to six, but in challenge matches between the two families, it was the Parks who gained the upper hand.”