Ogilvy positioned for run at first win since 2010 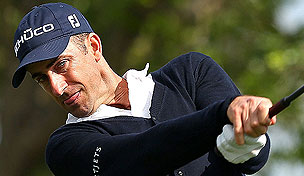 Getty Images
NORTON, MA - SEPTEMBER 06: Brandt Snedeker hits the ball on the fifth hole during the final round of the Deutsche Bank Championship at TPC Boston on September 6, 2010 in Norton, Massachusetts. (Photo by Michael Cohen/Getty Images)  -

PALM BEACH GARDENS, Fla. – When Geoff Ogilvy claimed the season-opening Hyundai Tournament of Champions in 2010, it marked his seventh PGA Tour victory in six season, just another stepping stone in what had become an exceedingly successful career.

Since then, he’s stumbled over those stepping stones.

Ogilvy has competed in 64 events since that win, with only six top-10s to show for it and no other titles. Last year’s campaign was filled with finishes in the teens and twenties, as he made 18 of 20 cuts, but already this year he’s missed four out of five.

Three rounds into the Honda Classic, Ogilvy is right back in contention, as scores of 68-66-70 have him just two strokes behind co-leaders Michael Thompson and Luke Guthrie entering the final round.

“I putted really, really poorly on the West Coast,” he explained. “I was hitting the ball quite well, but when you miss a couple of putts, it changes your whole mood, as well. Golf seems so much harder when you're not making those eight-, 10-footers for birdies, every now and then when you get a chance. It just seems like a harder game and things just are all kind of going the wrong way, which happens when you're not making any putts.

“So I'm kind of hitting the ball similar how I was. … I just holed a few more putts than early in the week. And I think that kind of gets everything else happening.”

As to what Sunday may hold, Ogilvy contended that patience will be a key on what’s been a windblown course.

“It's a very tricky golf course if you get off track. The rough is very thick, hard to get up-and-down if you miss a green in the wrong spot. And when the wind is like this, it's hard to hit it in the right spot,” he said. “So do the same thing, if I play well again, hopefully I'll have a chance the last few holes, and see what happens.”