McDowell under par, but loses ground to Woods 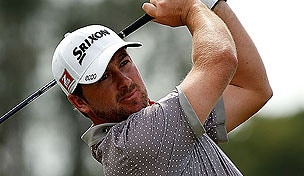 Getty Images
CROMWELL, CT - JUNE 25: Ryuji Imada of Japan lets go of his driver after a drive during the second round of the Travelers Championship held at TPC River Highlands on June 25, 2010 in Cromwell, Connecticut. (Photo by Michael Cohen/Getty Images)  -

DORAL, Fla. – Graeme McDowell began the third round of the WGC-Cadillac Championship two shots behind Tiger Woods. He ended it four shots behind Woods.

That’s nothing to scoff at. Many have fallen to Woods over the years. But this occasion was different for McDowell. He let many opportunities slip while shooting 69.

“Not sure if I can physically hit the ball any better than I did the first 10 holes,” McDowell said. “Really controlled everything extremely well.”

McDowell was tied for the lead after the sixth hole and Woods regained it with a birdie on No. 8. It looked like McDowell was in position to close the gap again on No. 10 – or perhaps even take the outright lead – but he three-putted for par on the par 5 while Woods scrambled to make an unlikely birdie.

“The three-putt on 10 kind of rattled me a little bit,” McDowell said.

On the next hole McDowell made his first bogey of the tournament and three holes later he made double bogey on the 14th hole to lose all momentum. A chip-in eagle on the 16th hole righted the ship some, enough to put McDowell in the final pairing Sunday with Woods.

“He’s going to be a tough man to catch tomorrow,” McDowell said. “I get to watch it and get to see him and hopefully get a chance to get close to him tomorrow.”