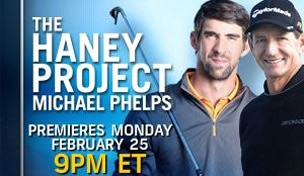 Starting Monday at 9PM ET on Golf Channel, U.S. Olympic swimmer Michael Phelps takes on a new challenge: improving his golf game while traveling to some of the world’s finest courses. The most decorated Olympian in history, Phelps will test his athletic prowess on dry land under the watchful eye of legendary swing coach Hank Haney. During the fifth season of The Haney Project, Tiger Woods’ former swing coach will try to keep Phelps out of the water and guide the 22 career Olympic medal-holder in his goal to improve his game from tee-to-green.

Tune-in to the Season Premiere of The Haney Project on Monday, February 25 at 9PM ET to join Phelps on his quest to play better golf. In addition to one-on-one instruction with Haney, each episode will feature Phelps in his own environment with cameos from famous friends and family members. Plus, expect appearances from other celebrity students who have starred on The Haney Project, including NBA Hall-of-Famer Charles Barkley, Emmy Award-winner Ray Romano and Grammy Award-winning Maroon 5 front man and mentor on NBC’s “The Voice” Adam Levine.

Watch the all-new season of The Haney Project Mondays at 9PM ET, only on Golf Channel. Join the conversation on Twitter: #HaneyProject