Hawk's Nest: What were they thinking? 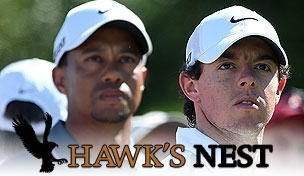 Most people wouldn’t wake up at 3 a.m. to watch a golf tournament, and I’m no exception. It’s easier just to stay up all night, which makes it more likely I’ll fall asleep before play ends but also guarantees that I’ll catch a majority of the action. Is there anything better than a Tiger Woods f-bomb after he misses the 11th fairway at 5:42 in the morning?

OK, so Tiger’s language and my discretion in the wee hours aren’t for everybody. I made it to about 6:20 last Friday, then woke up two hours later to the clatter of my 9-year-old daughter. By 8:25, I’d been told Woods had missed the cut in Abu Dhabi because of an illegal drop and subsequent two-stroke penalty.

Time waits for no one. Rust never sleeps, although it will take four weeks off when it belongs to Rory McIlroy – more on that shortly. An imbedded ball in a sand-based lie? Fans moved an obstructive boulder for Woods at the Phoenix Open back in 1999. No penalty there. In 2006, Tiger hit a 9-iron that bounced onto the roof at Firestone CC. For crying out loud, he was given a free drop.

Justice eventually prevails, but last week’s MC is merely the latest sign: An older Tiger Woods isn’t the same as the old Tiger Woods, if you know what I mean.

HE TURNED 37 late last month, the cusp of middle age, a point at which a man is expected to act responsibly and feel comfortable in his own skin. That said, there’s no way Woods would have made a television commercial with his most formidable opponent – a legitimate rival, an obvious impediment on his climb up Mount Nicklaus – 10 years ago.

In the early 2000s, Tiger was far more likely to make fun of those who threatened his reign, at least privately. Any friendship he had with Sergio Garcia was over before they played together in Sunday’s final pairing at the ’02 U.S. Open. Vijay Singh was clearly a competitive enemy. On and off the course, Woods and Singh spoke to each other only when absolutely necessary.

Phil Mickelson has earned an increased measure of Tiger’s respect over the years, but differences in their personalities (and Mickelson’s accomplishments) have always kept them from getting close. There were times when Woods joked about Lefty’s expanding waistline or his reckless style of play, and if you wondered how serious he was, it really didn’t matter because nobody did much about it.

Eldrick Almighty beat them all on a regular basis, but not anymore. Rory McIlroy is the new sheriff, owner of two major titles by eight strokes apiece – a deft impersonation of Tiger at his most dominant. So what if they were never actually together when filming the new Nike ad? Perception is nine-tenths reality, and besides, the commercial’s message is rather apparent.

Woods may get the last laugh by knocking a ball in McIlroy’s drink, but the two are presented as nothing less than equals. Call it maturation, call it a concession, but in terms of Tigerology, I would’ve called it impossible until recently.

MY FIRST TWO live chats of 2013 were lightly attended but full of excellent questions and comments by knowledgeable golf fans. Frankly, I enjoy the smaller audiences over the crowds of several thousand – perhaps half of which sign in only to complain about TV coverage. As if I have even an ounce of pull there.

Last week’s most relevant topic was McIlroy’s switch to Nike equipment and the utter lack of precision he displayed with the clubs and ball. It’s so easy to blame the manufacturer for any such performance. With the better players, it falls somewhere between a kneejerk reaction and an assumption.

McIlroy would say only that he was rusty, then announced he wouldn’t play again until mid-February. Really? Dude, don’t you need real-game reps with the clubs? Anyone can get comfortable with new equipment on the range. Why not change you schedule? Have you gotten so busy – or so consumed by the parameters of success – that you can’t sneak a tournament onto your calendar in an effort to expedite the transition to Nike?

Perhaps McIlrust will return from his lengthy break and win his first tournament back by a half-dozen shots. Until that happens, I think he should be playing in live events. He can sit on the porch and sip margaritas later this year – after the Swoosh stuff has started to deliver.

A QUICK RANT on the decision to deny David Duval a sponsor’s exemption into the Humana Challenge: shame on everyone who chose not to give the guy a spot in the field. I understand that Duval isn’t nearly the player he once was – and that the tournament has undergone numerous changes in recent years – but we’re talking about a guy who shot perhaps the best round in PGA Tour history to win the event in 1999.

We’re talking about a weak-field event that should be begging for attention, but as one keen observer noted on last Friday’s chat, if they can bump Bob Hope off the shingle, they certainly can say no to David Duval.

Perhaps it’s worth noting that Woods was supposedly denied an exemption into this same tournament back in 1992, angering Tiger’s father, Earl, to a degree that the kid privately vowed never to play in the event, and he hasn’t. When I asked Tiger about it years ago, he issued a two-word response that is unsuitable for this particular forum. Suffice it to say the damage was irreparable.

DOES COLIN MONTGOMERIE belong in the World Golf Hall of Fame? I think not, but then, I gave back my WGHOF vote years ago, and those who didn’t obviously feel compelled to enshrine a contemporary player every year. This hardly is a felony, but the added commercial value that comes with such an induction is obvious, if not all that significant.

Very few, if any, of the 1,345 tweets I’ve posted have generated more agreeable replies than the series of Monty-doesn’t-belong blurbs I tossed into Twitterville a couple of weeks ago. My argument is fairly simple: as terrific as Montgomerie was in several Ryder Cups, those performances aren’t nearly enough to outweigh his career-long inability to win even a single major title.

The guy never won an official event in the United States and never won a World Golf Championship. No question, Monty dominated the European Tour for much of the 1990s, winning seven consecutive money titles (officially known as the Order of Merit), but this was at a time when the Euro circuit wasn’t as deep as it is today – before the WGC series added premium-field width to the earnings ledger.

The goal here is not to belittle or even downplay Montgomerie’s accomplishments. He was a very good player with a couple of huge holes in his resume, but the number that speaks the loudest is that he got in despite receiving just 51 percent of the vote on the international ballot – an agenda-driven constituency if ever one existed.

Bottom line? Halls of Fame should be special, unaffected by any form of performance-related compromise. Congratulations, Monty. You fooled 'em all again.

AS MUCH AS I enjoy “Pardon the Interruption” and the opinions voiced by Tony Kornheiser and Michael Wilbon, the show’s longtime, multitalented co-stars, I was taken aback by the sloppiness of their takes on the two-stroke penalty Woods received in Abu Dhabi. It was the first item out of the final commercial in last Friday’s show. Unless I was hearing things, Kornheiser said Tiger was “DQ’d” just as the show headed into that break.

Both men wondered why Woods called over fellow competitor Martin Kaymer to examine the now-infamous imbedded ball. Wilbon even surmised that Kaymer, a German who now lives in Scottsdale, was summoned by Tiger because he plays a lot of desert golf. The actual reason was very simple – Kaymer was keeping Woods’ scorecard.

They wondered why Tiger didn’t call in a rules official. Obviously, Red Shirt didn’t think he was committing a violation. For those who think Woods might have been looking for an early jet home, forget it. The incident happened on the fifth hole. Tiger hadn’t gotten off to a good start, but he had a ton of golf left that afternoon – and would eventually work himself back into the weekend mix before the penalty knocked him to the wrong side of the cut.

One constant about rules infractions: the cut-and-dried nature of golf’s law does not allow much room for interpretation. Tiger took an illegal drop – simple as that. He declined an invitation to ride back out to the area right of the fifth fairway and re-examine the scene of the crime. Why? Because he knew the ground was sand-based. Otherwise, it wouldn’t have plugged.

What’s amazing is how infrequently Woods has had to deal with rules situations over the years. Almost every shot he hits in competition is on television. A million eyeballs are on his egg at all times; his on-course honesty is beyond reproach. To paraphrase noted golf guru Carl Spackler, he’s got that going for him, which is nice.