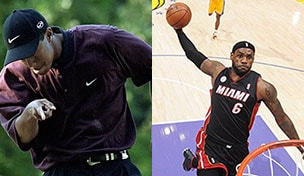 Getty Images
CROMWELL, CT - JUNE 27: Scott Verplank prepares to hit his second shot on the 18th hole during the final round of the Travelers Championship held at TPC River Highlands on June 27, 2010 in Cromwell, Connecticut. (Photo by Michael Cohen/Getty Images)  -

Tiger Woods and LeBron James were both born December 30 and, at the moment, LeBron’s playing at Tiger 2000 levels. He’s the greatest fast-break finisher I have ever seen, and at this rate, could someday be regarded as the most complete player in history.

With that, here are more Hooks & Cuts:

• Sad to see Olympic wrestling go away. I grew up in a wrestling hotbed, the Lehigh Valley in Pennsylvania. Bobby Weaver winning the gold in L.A. in 1984 with Curt Gowdy on the call remains one of my all-time favorite Olympic moments. Weaver pinned his Japanese opponent, sprang from the mat, did a back flip then went into the roaring crowd to take his newborn child for a victory lap. In any event, while wrestling is out, golf is in, and golf needs to deliver an exciting competition in 2016, with all the players buying into the Olympic spirit. There’s still no guarantee golf makes 2020.

• Sad to see the U.S. Publinx go away. Truck drivers who were long drivers ... Monday through Friday mail carriers who were Saturday and Sunday bag carriers, the Publinx years ago belonged to them. But in the last couple decades with a Masters invitation on the line it often mirrored the U.S. Amateur, all the well-trained and well-scrubbed Tour pros in training putting both tournaments on their summer schedules with an eye on springtime in Augusta.

• Brandt Snedeker won the Publinx and we loved his chances to win the WGC-Accenture Match Play until the rib injury shelved the hottest player in the game. For Sneds right now, it’s all about being primed for The Masters. And he should be one of the five favorites there.

• Jerry West, Mr. Clutch, has tried and tried to get Tiger to come back home to Southern California and play in the Northern Trust Open, to no avail. That has to eat up one of the fiercest competitors the NBA has ever seen. Tiger, like all pros, is obviously free to make his own schedule, but it remains a mystery as to why he won’t go back to the area where he grew up and play one of the absolute classics, Riviera.

•  What’s worse for the average player than being 2 yards off the green on a par 4, in position for a par, only to chunk your first chip, blade the next 40 feet by, and then three-hose for a neat little 7?

• Finding your ball a yard beyond the out of bounds stakes isn’t pleasant either.

• I played some muni golf, hitting 6-iron from 175 against guys who could beat my brains in stuffing 5 woods to 8 feet from that same number.

• Tiger is going back to The Honda Classic. In the last five years, it’s easily the Tour’s most improved event. Schedule helps, sandwiched between two WGC stops. Then there’s location; PGA National in Palm Beach Gardens is a short drive from not only Tiger, but new Floridians like Rory McIlroy, Keegan Bradyley, Rickie Fowler and Westwood.

• My wife wonders why I can adjust my driver with a screwdriver but not the kitchen cabinets.

• Show biz can be cruel. George Lopez didn’t get the invite last week back to Pebble.

• Chris Berman now lays 32 in that bunker, but he’s on a slight upslope. The next one should be no problem.