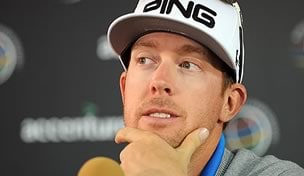 MARANA, Ariz. – The stark reality is this: Half the field here will be sent home Wednesday, after the opening round, after only a few hours, travel plans be damned. That’s the win-or-go-home mentality that permeates through this WGC-Accenture Match Play Championship, and being bounced early is no fun.

Sure, it eventually happens to just about every great player. Tiger Woods has lost in the first round twice, in 2011 and 2002. Same with Phil Mickelson. Last year Luke Donald lost the opener to Ernie Els and became just the third No. 1 overall seed to be sent packing after the first day.

Defending champion Hunter Mahan remembers the feeling of a one-and-done, even if it has happened only once. The early flameout came in 2010, when he lost to Charl Schwartzel, 2 and 1.

“You get so ready, you get so primed for this week, and then it’s over and you have to go home,” Mahan said Monday at Dove Mountain.

What’s the feeling like in the van ride afterward, knowing all that preparation was for but a few hours’ work?

“If you could teleport yourself out of there, you would, to anywhere, because you just don’t want to be there anymore,” he said. “The van can’t move fast enough. People can’t get out of the way fast enough. Everything bothers you. And if someone asks you ‘how was your day?’ you want to punch them in the face.”