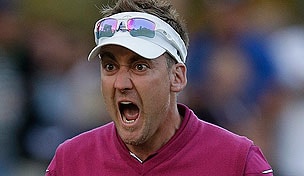 MARANA, Ariz. – On Sunday, Ian Poulter was digging through his office drawers, flipping through some “bits and pieces,” when he stumbled upon something interesting: his yardage book here from 2010.

Consider that a good omen for this week’s self-proclaimed “marked man.”

Depending on your rooting interest, Poulter is either the hero or the villain from the Ryder Cup at Medinah. He posted a perfect 4-0 record, including a pivotal point Saturday – with eyes bulging, fists shaking – that helped give the Europeans some much-needed momentum heading into singles.

In interviews since, Poulter has expressed the need to channel that emotion in hopes that it will make him a more prolific stroke-play winner. “I have to sit down and work out what happens to me,” he said recently. “My mindset changes very much, and I need to do that in stroke play. If I can raise my game like I do in match play, then anything is possible.”

But this week, he can emote as much as he wants.

Poulter’s quest for a second WGC-Accenture Match Play title begins Wednesday, when he takes on Scotland’s Stephen Gallacher at 7:45 a.m. local time. After a busy end to 2012, which included an impressive victory at the WGC-HSBC Champions, Poulter hasn’t played in six weeks, since the season-opening Hyundai Tournament of Champions.

“Match play, you have 18 holes to try and send your opponent home packing,” he said. “Hopefully you do that as soon as you possibly can and save some energy for rounds later in the week.”