If not now, when? The stars aligned for an International win, however ... 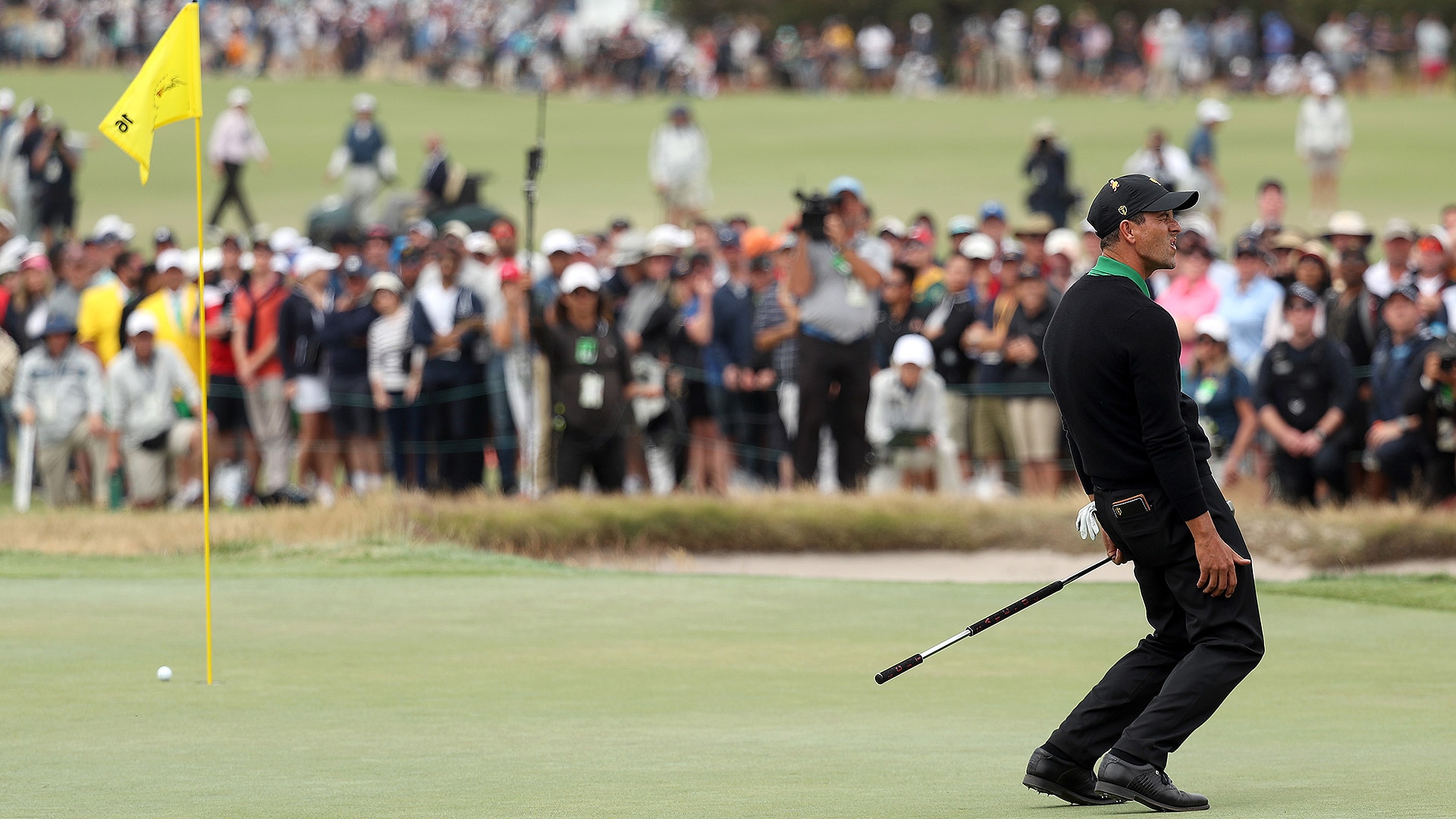 MELBOURNE, Australia – As Tiger Woods became engulfed in bro-hugs a few yards away in the 17th fairway, Ernie Els sat frozen behind the driver’s wheel of his jet-black golf cart. Stunned by the finality of Matt Kuchar’s Presidents Cup-clinching putt, he spoke softly into an earpiece microphone clipped to his vest, hit the gas and drove off to wonder where it all went wrong.

After two decades of beatdowns and blowouts, this was finally an opportunity for the International team to get its fingerprints back on the trophy. This was the long-awaited chance for Els to right the wrongs of his predecessors, capitalize on a true home-course advantage and put years of heartache to bed.

And yet here he was again, left to swallow another American victory in the biennial matches that increasingly feel like a fait accompli.

“We’re getting closer. We’ve just got to keep it up,” Els said. “All credit to the U.S. team. They have an absolutely stacked team. They have great champions, major champions. We’re building on that.”

For all the talk this week of the tournament being played on grass instead of paper, the systemic advantages enjoyed by the American squad are undeniable. Winners now of eight straight, they sport a deeper roster filled with some of the world’s best players, equipped with an inherent sense of camaraderie that comes from playing team events every year and unencumbered by language barriers inside the team room.

Every two years the Internationals show up to play against a stacked deck, knowing full well that almost every break must go their way to even challenge their formidable foe. And this week, the figurative ball bounced in their direction on nearly every front. Consider the following:

Venue: The tournament shifted back to Royal Melbourne, not only the site of the lone International triumph but also a course that requires immaculate shot-making. It’s a sprawling landscape where a well-developed strategy can prove critical, and also one where many of the advantages the Americans might enjoy on a typical PGA Tour venue were effectively neutralized.

Chemistry: So often the downfall of the International side, they had a decided edge simply by remaining neutral while the U.S. side nearly imploded around Patrick Reed’s dramatic antics. Reed went from a distraction to an outright liability as the week progressed, putting his teammates in unenviable positions while galvanizing the opposing crowd against him. Just by avoiding controversy, Els’ squad picked up ground.

Health: In addition to dealing with intercontinental jetlag, the Americans were far from 100 percent. They were without world No. 1 Brooks Koepka, Dustin Johnson hadn’t played since August and Rickie Fowler had teed it up just once in that time. Meanwhile, Els’ loss of Jason Day turned into a windfall when Byeong-Hun An turned in a surprisingly strong performance while playing in every session.

Team play: The early sessions that have hobbled the Internationals in recent years became an advantage. Els revealed Sunday afternoon that his grand plan was focused around securing 10 points from the team portion of matches, which was the exact target his squad hit while taking a two-point edge into singles.

Rookies: On a team with seven first-time participants, Els needed a few to step up and he got just that. In addition to An, Sungjae Im and Abraham Ancer turned in revelatory performances, each taking 3.5 points out of five to lead the team.

Even on Sunday, as the board became awash in red and an American comeback shifted from an abstract possibility to a very real threat, Els had veterans Louis Oosthuizen and Marc Leishman to lean on in the final two slots. If he could have chosen on Wednesday night two players in whom to trust the fate of his team, both would have been near the top of his list.

The stars must align for an underdog to pull off an upset of this magnitude, and throughout the week it felt like Els’ group had discovered the secret sauce. And yet, in spite of everything that went their way, in spite of every crack that appeared in the American façade, it still wasn’t enough.

“The U.S. train is a big one. The depth just keeps coming,” said Adam Scott, having concluded his ninth Presidents Cup without a team victory. “And they played better than us when it counted today.”

As the sobering realization of another loss enveloped the International squad, they quickly sought to spin a mathematical loss into a moral victory. They proclaimed that this week laid the foundation for the future, with a youth-laden roster gaining invaluable experience.

“To take a lead into the singles on Sunday, I think there’s some stuff for us to build on, certainly,” Scott said. “The guys that have bought into this team will be wanting to buy in in two years. I’m excited about what’s to happen for the Internationals, and I hope the guys just generally lift their games over the next couple years and we can field an even more formidable team next time.”

But the fact remains that the task will be far more arduous in two years at Quail Hollow, with the Americans rarely challenged and never defeated on home turf. How either roster might look in four years, at an International venue yet to be determined, is anyone’s guess.

“The questions will come from you guys and the public that I made mistakes in the selection of where I put my players, but I followed a plan from 100 percent,” Els said. “It didn’t quite work out, but damn we came close.”

That his squad came close is undeniable. But the end result, in spite of the various circumstances involved, indicates that actually getting across the finish line is a Herculean task.