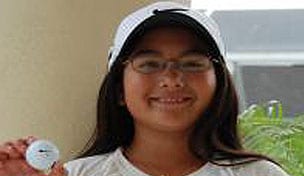 The participants in the U.S. Women’s Amateur continue to get younger and younger.

This year, the USGA will have its youngest player yet.

Latanna Stone, a 10-year-old from Valrico, Fla., shot 70 July 13 to earn medalist honors at her qualifier and become the youngest player to qualify for the U.S. Women’s Amateur, which will be played at The Country Club in Cleveland on Aug. 6-12.

Previously, there had been eight other players to qualify at age 12.

Stone, however, is a unique case.

According to the Florida State Golf Association, she has won more than 100 tournaments in her junior career. She has her own website. And she already has her own Twitter account (@LatannaStone).

As she wrote on July 18: “Thanks everyone for the well wishes I received for qualifying for the US Women Amateur. So happy and excited to play!”