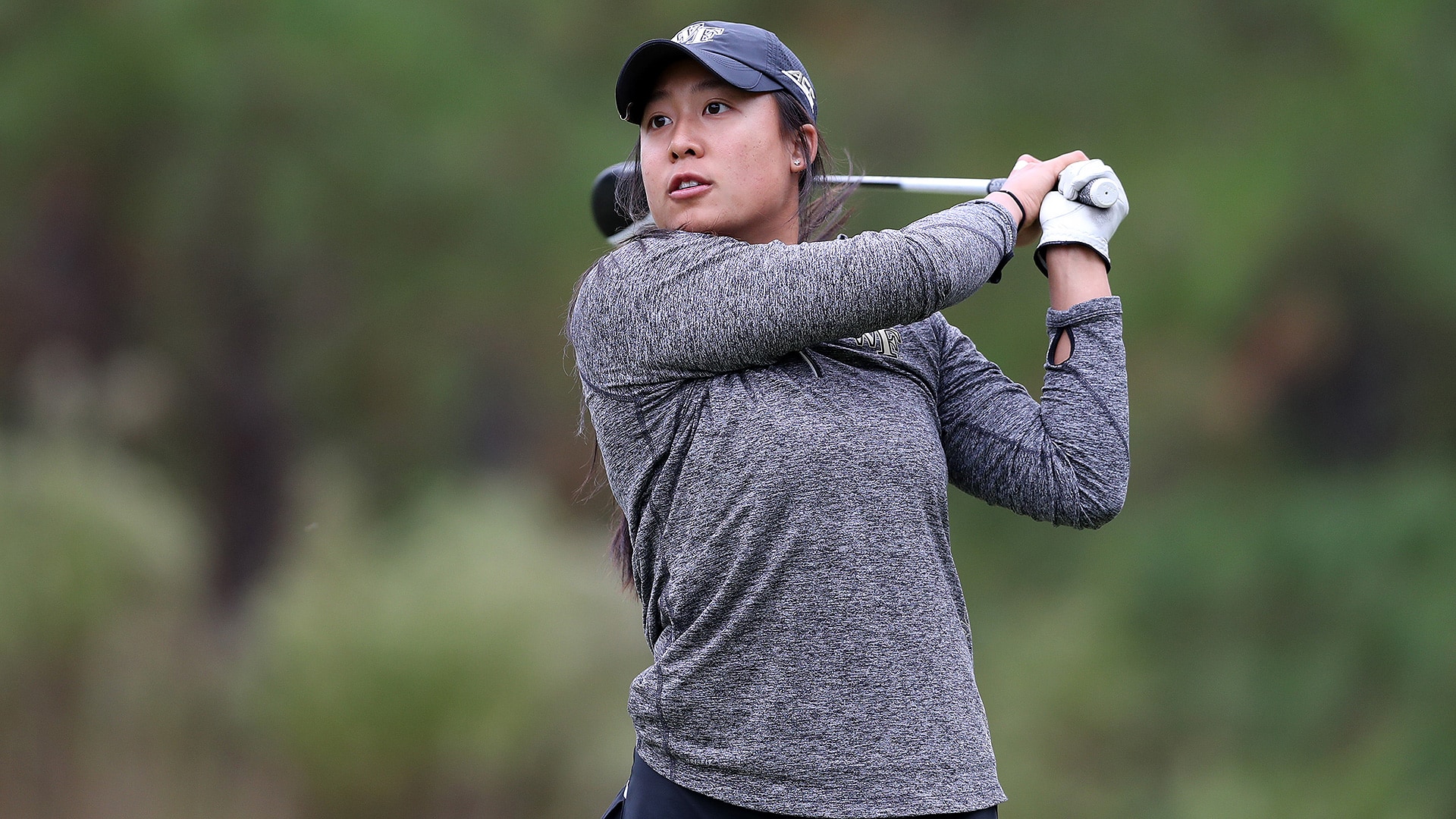 College continues to mark a period of self-discovery for late adolescents. This certainly applied to former collegiate player Mai Dechathipat, whose goals to play on the LPGA Tour shifted to competing on the Professional Long Drive Association.

Who competes as a professional long driver, you might ask? Male and female players who have the secret talent we all wish for: hitting it far – really, really far.

For the men, that means winning tournaments with drives well over 400 yards, and for the women, over 300 yards. This intrigued the golfer from Bangkok, Thailand, who knew she had a knack for bombing drives.

“I wanted to turn professional when I was a freshman and sophomore [in college] until I transferred,” said Dechathipat, who moved from Auburn University to Wake Forest University for her junior year in 2017. A few years later, in March of 2020 – a year after Dechathipat had graduated – the COVID-19 pandemic prompted her thoughts on long drive.

“Credits to Kim and John Lewellen,” said Dechathipat, referring to the current head coach of Wake Forest University, Kim, and her husband, John. “It was COVID year and I got stuck at Wake. We took a beach trip once, and John was like, ‘Have you heard of long drive?’ and that was the conversation that started him training me to hit it longer.”

Driving distance is the most admirable part of Dechathipat’s game. During her collegiate years, her club-head speed was 110 mph, just shy of the average PGA Tour player swing speed at 114 mph. The vast majority of PGA Tour players sit between 110-125 mph. With a little long-drive training, Dechathipat increased her club-head speed to 120 mph, which adds up to at least a 300-yard carry. To compare her numbers with the big names on the LPGA, Lexi Thompson ranks 10th in driving distance this year, averaging 273.13 yards off the tee and Nelly Korda ranks 14th at 271.46 yards.

“Before COVID, long drive was booming and people were doing it for a living,” said Dechathipat.

However, after the pandemic hit, the World Long Drive Association lost some TV exposure. Dechathipat returned to Thailand and was removed from the golf world, not sure when she’d be able to return.

Then the Professional Long Drive Association (PLDA) was formed.

“The new long-drive tour gave us hope,” Dechathipat said. “I wasn’t looking to do it (long drive) as a job, but it's a good spin off for some people who don’t play [professional] golf anymore.”

In 2021, Dechathipat finished second in the PLDA’s most prestigious competition, the world championship, where the sport’s top athletes travel globally to compete for a winner’s share of $50,000 for the men and $10,000 for the women. Last year’s championship was held at the Mesquite Sports and Event Complex located in Nevada and garnered extra attention with Bryson DeChambeau's quarterfinal run.

For those wondering what it’s like to stand up to your first shots in a long drive tournament versus the first tee of an 18-hole golf event, Dechathipat will tell you: “The environment feels like the Waste Management tournament,” she said, referring to the rowdy 16th tee at the WM Phoenix Open. “There’s music and people cheering. In golf, you have to pack your adrenaline and focus on the target, but with this, you can just let it go.”

Ready to hear the numbers? Dechathipat’s farthest drive traveled 324 yards. In the world championship, Dechathipat also beat long drive notables Mary Driscol, who has a career high ranking in the top 10, and Sana Yanai, a top-five hitter representing Japan and the 2021 JPDA Long Drive Japan tournament champion. She finished runner-up behind Kanani Lodge, currently ranked No. 1 in the sport and the record holder for fastest ball speed (194.4 mph) ever for any woman and swing speed (134.2 mph).

Journeying through multiple paths in her young career, Dechathipat has learned that, despite a non-traditional road to success, it’s her passion to become the best athlete she can be.

“Accept that your journey will evolve,” Dechathipat said, “and believe it will evolve into something greater.”