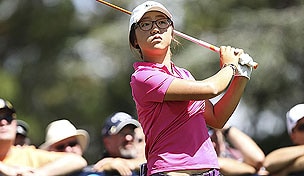 Those clamoring for Lydia Ko to turn pro might have to wait. The teen sensation told reporters after her solo third at the LPGA’s season-opening ISBS Handa Women’s Australian Open that she will turn pro in a “couple of years.”

“I’ve got a couple of years until I turn pro, so I guess within that period hopefully I’ll be able to get a little bit better,” she said after her final round.

Earlier this week, Ko’s coach, Guy Wilson, told Fairfax Media that his pupil likely will be ready to turn pro next year. “Realistically, she’s probably going to look to turn pro next year, only because the opportunities now are pretty obvious,” he said, according to the report. “Wasting two years at college could be a disadvantage.”

Tied for the 54-hole lead at Royal Canberra Golf Club, Ko shot a final-round 76 and finished four shots back of winner Jiyai Shin and two behind Yani Tseng.

Ko, who shot a 10-under 63 in the opening round, was bidding for back-to-back worldwide victories – and her fourth pro title in barely more than a year – after she captured the Ladies European Tour’s New Zealand Women’s Open last week. She already is the youngest-ever winner on the LPGA circuit, winning the CN Canadian Open at 15 years, 4 months and 2 days.

Ko is also playing in next week’s LPGA event in Thailand before competing in the New Zealand PGA Championship at the end of the month.

“I always think putting is the biggest part of the game and also the psychology part, so those are the two things I would like to build up,” she told reporters afterward.