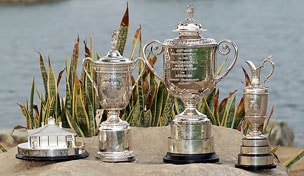 Rory McIlroy’s runaway U.S. Open victory seemed to herald the arrival of a new era in pro golf. If the Tiger Dynasty isn’t officially over, the emperor remains in competitive hiding, his climb up Mount Nicklaus stalled by a bum leg and, lest we forget, a faulty swing. The last five major championships have been claimed by non-Americans, all of whom were 30 or younger. This trend hardly constitutes a revolution, but clearly, the landscape is very different than it was, say, three days ago.

The last British Open held at Royal St. George’s (2003) featured a complete unknown (Ben Curtis) beating a snazzy collection of household names (Woods, Vijay Singh, Davis Love III, Thomas Bjorn). No one saw that coming, either, so we dip our toe into the fountain of prognostication with enormous respect for the great unknown. Here are my 10 players under age 35 with the best chance of hoisting a big trophy in the near future. Which, in case you haven’t still noticed, is right now.

10. Luke Donald – He might be No. 1 in the world ranking, but he’s No. 10 on this list. Squarely in the prime of his career, Donald’s huge success in 2011 might be traced to an improvement in driving accuracy; he’s 26th on the PGA Tour after finishing outside the top 100 each of the past three years. Nobody’s better from 125 yards and in, but shorter hitters have a much harder time winning majors than do those who drive it 300-plus. Every week, a dozen bombers show up with hot putters. That Donald made it this far is a credit to his brilliant short game and mental toughness.

9. Eduardo Molinari – He’s 18 months older and three inches taller than his brother…and not having nearly as good a 2011 as some might have expected, his best finish being an eighth back in late January. Still, the ceiling is high for both Molinaris. Eduardo managed a T-11 in this year’s Masters – not bad for a short hitter in just his second start at Augusta National. Renowned as a better putter than his little bro, Eduardo currently resides in 147th place on the European Tour in putts per GIR. That will have to change if he wants to take the next step.

8. Ryo Ishikawa – Tom Watson is among those blown away by the Bashful Prince’s ability to hole putts from any distance, but this has been a rough year for Japan’s best young player. Ishikawa has fallen to 49th in the world ranking, an understandable decline for a kid who has pledged to donate all his 2011 earnings to the victims of the March tsunami that devastated his homeland. A pair of top 30s at The Masters and U.S. Open offer more evidence of his vast potential. When you’re 19 years old and playing on the weekend in the game’s biggest tournaments, you’re going places.

7. Hunter Mahan – He drives it wonderfully and can go crazy with the putter, but other than that music video, Mahan has been somewhat quiet in 2011. With missed cuts at both majors, the big-game momentum Mahan seemed to find at the ‘09 U.S. Open has disappeared. Despite a ton of hard work, his short game remains suspect – fourth in GIR, 136th in scrambling. Lee Westwood has dealt with the same stigmatization, and he’s still looking for his first major title, too.

6. Bubba Watson – Nobody has upgraded their major prospects to a greater degree than the lanky lefty, whose portfolio includes three wins and the playoff loss to Martin Kaymer at the last year’s PGA. Bubba’s bodacious length makes him an obvious candidate to win a Masters, where he’s finished 42nd or better in three starts, but the big thing with him is his dramatic improvement with his irons – Watson leads the tour in GIR. At a lot of places, it doesn’t matter where you drive it when it comes to a rest 340 yards from the tee box.

5. Alvaro Quiros – Talk about long. And raw. Nobody on earth pounds it further than the big Spaniard, whose Euro Tour stats have increased steadily over the years. He currently ranks 47th in greens and 16th in putting, and though he’s never been in the Sunday hunt at a major, his progression as a scorer suggests that may change in a hurry. The longer they make the course, the better chance Quiros has. If they get to 9,000 yards, he may never lose.

4. Francesco Molinari – A pure ballstriker whose climb to 22nd in the world isn’t by virtue of what he’s done at U.S. majors; his best finishes here came back in 2009. More than his brother, however, Francesco has a complete set of major-friendly tools. His driving accuracy has improved dramatically since 2007, and though he’s not very long, he hits a ton of greens, which is why he doesn’t miss many cuts. A T-3 at Doral this spring was his first real foray into big-time contention, at least in this side of the Atlantic. Definitely worth keeping an eye on.

3. Dustin Johnson – Still the most polished of the mega-bombers, Johnson has the type of fluid putting stroke that will hold up under the greatest competitive duress, which he proved at the 2010 PGA. For all the talk about his disappointing year, he still has three top-fives, none of them at weak-field events. The addition of caddie Joe LaCava can do nothing but help when things get serious – there isn’t a more composed and insightful guy to have on any given Sunday. Johnson is too good not to win at least one big trophy, but it may take longer than some expect.

2. Jason Day – He wouldn’t have made this list last July, but runner-up finishes at each of the year’s first two majors indicate Day is ready to fulfill the potential that made him one of Australia’s best players at a very young age. It’s hard to believe he’s still just 23, and when you look at the kid’s body of statistical work, you begin to see a guy who can excel on many different types of courses. He’s long, makes a lot of birdies and leads the Tour in sand saves. Definitely on a wise man’s short list for next week’s gathering.

1. Nick Watney – Given his victory in Philly last week, this pick may amount to a bit of bandwagon-climbing, but when Butch Harmon tells you someone is a major champion waiting to happen, you consider the source. When Watney is going well, he can shape his driver, which is a huge asset on tough courses. His Sunday blowup at last year’s PGA is looking more and more like a McIlroy-esque learning experience. His stats are shockingly good –nobody who hits it as long hits it as straight – but the two numbers I love are the eighth in birdie-conversion percentage and sixth in final-round scoring. This guy has all the goods. Just ask Butch.