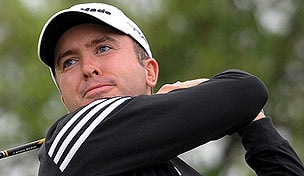 SAN ANTONIO – Fed up with his putting, Martin Laird decided to put “old faithful” back in the bag this week at TPC San Antonio.

After a stunning 63 to capture the Valero Texas Open on Sunday, Laird is now wondering why he ever stopped using it.

Entering this week, Laird was ranked 167th in the PGA Tour’s strokes gained-putting statistic. He struggled on the poa annua greens on the West Coast. He had eight three-putts in both Tampa and Orlando.

Finally, after another missed cut last week in Houston, Laird said that the TaylorMade Ghost DA-12 was going back into play – the same medium-length flat stick he used to win at Bay Hill in 2011.

When asked what precipitated the switch, Laird said, smiling, “The other ones weren’t working, either.”

It’s been a disappointing season for the Scot, who entered this week having missed half of his cuts (4 of 8) and outside the top 115 in the world rankings.

“It’s been frustrating,” he said. “Just ask my wife how frustrating it’s been. I’ll go to the range and practice and stripe it, and then go to the course and hit it everywhere.”

In the final round here, he closed with three consecutive birdies – and one-putted the last seven greens – to finish at 14-under 274, two shots ahead of world No. 2 Rory McIlroy.

The victory sent Laird back to Augusta National, where he has played each of the past two years (his best result a T-20 in 2011).

“It might be kind of a good thing I’m such a late entry in terms of it was going to be a bonus week,” he said. “I’m not going to go there with expectations because I didn’t think I was in the tournament to start the day.

“Obviously, if I’m playing the way I did this week, I don’t see why I can’t be there on Sunday and be in contention.”