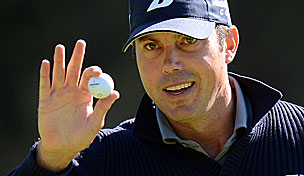 Getty Images
PEBBLE BEACH, CA - JUNE 16: Erik Compton looks on during a practice round prior to the start of the 110th U.S. Open at Pebble Beach Golf Links on June 16, 2010 in Pebble Beach, California. (Photo by Jeff Gross/Getty Images)  -

LOS ANGELES – Coming off a three-week break, Matt Kuchar might not remember golf feeling this easy.

He opened with three straight birdies, all of the putts inside 3 feet. He finished with back-to-back birdies at Riviera, holing a 25-foot putt on the 18th hole for a 7-under 64 that gave him a one-shot lead over Sergio Garcia on Thursday in the Northern Trust Open.

Garcia, making his PGA Tour debut after two tournaments in the Middle East, finished with two birdies over the last three holes even though he could barely see. Fog dropped in at Riviera over the final two hours after a day of warm sunshine, and Garcia could barely see the landing area in the fairway or the flags on the green.

No matter. He closed with an 8-iron to 6 feet on an elevated green at No. 9 for his seventh birdie.

Brandt Jobe, returning from a serious neck injury last summer, put his experience to use on the course he played more times than he can remember while at UCLA. He ran off four straight birdies late in his round, only to close with a bogey on the 18th to finish at 66.

Conditions have rarely looked this good at Riviera, from the firm grass below the feet and the magnificent, sun-filled sky above them – at least until the last couple of hours.

It felt like a working vacation, and it's the latter Kuchar knows so well.

After opening with three straight weeks on the PGA Tour, which featured a pair of top 10s, he spent a week in Palm Springs and then took his family to Hawaii for paddle boarding, snorkeling and just about everything involving an ocean.

Getting back to golf, he worked with swing coach Chris O'Connell and felt just as good as he did before his break.

''I think it was Monday we put in a good day of work and I said, 'I need to get out and play.' We went over to L.A. Country Club, played the North Course. I was excited about the things we were working on and excited how I was hitting the ball. ... I think the hot start was certainly a great way to get the round going.''

It was a great day for scoring, and Kuchar had plenty of company.

James Hahn, the 31-year-old rookie who shared the 54-hole lead last week at Pebble Beach, and David Lynn of England were at 67. Disney winner Charlie Beljan chose to finish in the fog after play was suspended. He closed with a bogey and had a 67. He had seven birdies.

Eighteen players failed to finish the round, not unusual for this tournament. They were to return Friday morning to finish, and then immediately start the second round.

The group at 68 included Lee Westwood and 53-year-old Fred Couples, a two-time winner of this event who feels rejuvenated when he plays at Riviera. Also at 68 was Fredrik Jacobson, the last man in the 64-man field at the Match Play Championship. With a good week, he won't have to face Rory McIlroy in the first round next week.

Couples played the final Champions Tour event last year and the season opener this year, along with a two-day exhibition. He hasn't practiced much in between.

''So it's surprising, but again, I can figure my way out around this course,'' Couples said.

He made clean, powerful contact for so much of the day, even producing the longest drive of his group on the par-5 17th over Westwood and Bubba Watson. Couples was pin-high on the hole for a simple up-and-down, the start of three straight birdies.

''It's kind of a golf course that if you play well, you can shoot a decent score,'' Garcia said. ''But if you are not on, you can struggle quite a bit.''

For the first time in nearly three years - dating to a second-round 73 in the 2010 Honda Classic - The Masters champion failed to make a single birdie. He had a 76.

Phil Mickelson also is trying to regain some form just two weeks after his record performance to win the Phoenix Open. He had said it was imperative to be in the fairway to approach the small greens of Riviera, and three fairways was not the blueprint he had in mind. Mickelson didn't hit a fairway until his 11th hole. Even so, he scratched out a 71 and felt he was only a round away from getting back into the mix.

The surprise might have been Jobe, who discovered nerve blockage in his neck that became so bad he couldn't close his hands around the club after playing the AT&T National last summer at Congressional. What followed was six months of rest and therapy and, after missing the cut at Torrey Pines, Jobe ran off six birdies at Riviera.

Jobe is on a major medical exemption, and he has to earn $303,178 in 10 events to keep full status the rest of the year.

''I've still got a lot of work to do to get to where I want to be, but my situation, every round counts,'' he said. ''So this is a good start to the week. Hey, I'd love to have a good week and get this thing wrapped up and be able to move on and have a normal life out here. But the reality is, you've really got to take it one day at a time. I've been out there and played enough that it's not the end of the world if you have a bad day.''

Four players withdrew, including Sean O'Hair, who had an 83, and Cameron Beckman, who had an 80. Steve Marino was disqualified for signing an incorrect scorecard. He had a 78. Ben Crane checked in with an 80. Geoff Ogilvy, who ended last year at No. 51 in the world, had a 76 for his eighth straight round without breaking par.

Kuchar had no such issues in his bogey-free round.

''Just drove it well today, which is a big key around here,'' he said. ''The greens are pretty tricky and pretty firm this year, so coming out of the rough, it's difficult to get a ball to stop close to the hole. Coming out of the fairway is a key thing to play some good golf, so we are driving it well and played some nice golf today.''