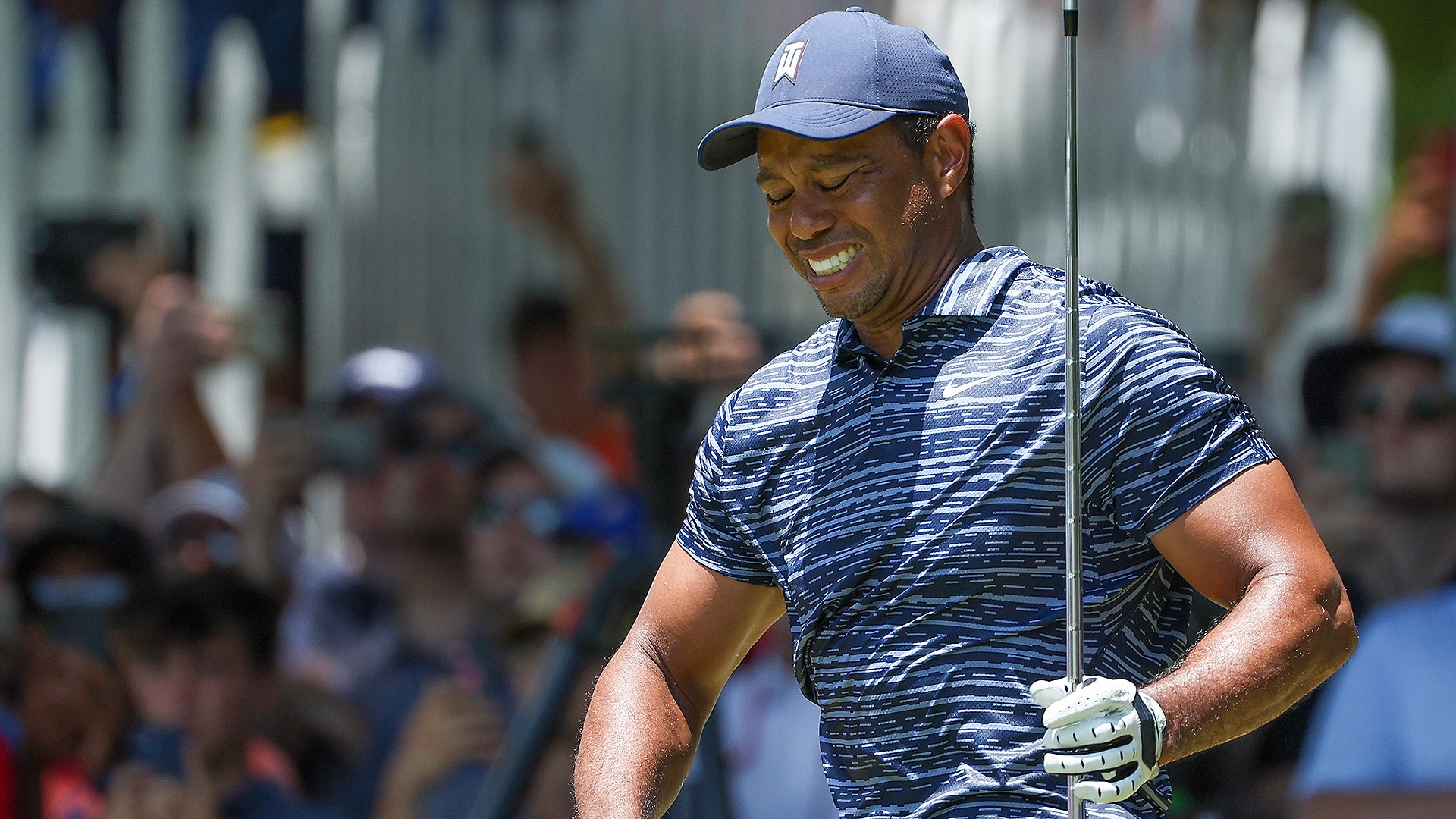 TULSA, Okla. – There was hope, optimism, encouraging pre-tournament talk of more strength, more endurance, more stamina. And then there is the brutal reality.

At the end of a sweat-soaked day at Southern Hills, Tiger Woods flailed another tee shot into the trees and was so dispirited that he couldn’t even muster any outward expression of disgust. No club slam. No expletive. He simply hobbled off the tee, returned his 2-iron to caddie Joe LaCava with nary a glance, and rested on his golf bag to avoid putting any weight on his reconstructed right leg. Internally, he was likely screaming in agony. Outwardly, he didn’t so much as grimace.

Southern Hills might not have the undulating terrain of Augusta National, but it’s not dead-flat Oklahoma farmland either. The capper to Woods’ laborious 4-over 74 Thursday was a straight-uphill 400-yarder, then a series of descending stairs to the scoring and interview area, then the same set of stairs back toward the player parking lot. Typically tight-lipped about his health, Woods limped through each of his post-round stops and didn’t bother to conceal his discomfort.

“Loading hurts. Pressing off it hurts. Walking hurts. And twisting hurts,” he said.

The question, of course, is how much improvement Woods will see over the next few weeks, months, years. In his leg are more plates, screws and pins than a Home Depot; he won’t – he can’t – improve his mobility. His ankle is fixed. (And so is his lower spine, after fusion surgery.) Though training sessions can strengthen the supporting muscles, he has also acknowledged the uncomfortable truth: pain will be a constant part of his golfing life. It can be flushed out later with treatment, but from now on inflammation will be as much a part of his round as the iron twirls and putter raises.

As he’s proven over the past 25 years, through back problems and knee issues, Woods is willing to play through pain, no matter the cost. This year’s Masters was a monument to his toughness, his grit, his competitive spirit. Using his club as a cane, he tied for 47th in his first competitive start since his devastating car accident 14 months earlier. “I didn’t feel very good about myself knowing he was on one leg and he made the cut and I didn’t,” Jordan Spieth said with a laugh.

But six weeks later, Woods appeared more miserable. He looked stiffer, slower, more labored. He played his first five holes in 2 under par and then slowly, inevitably, faded back toward par. He hit only three greens in his last 13 holes, missing both ways, and made seven bogeys.

“It was a frustrating day,” he said.

It was apparent that Woods, who won here in 2007 before the restoration, had a game plan for how best to navigate Southern Hills: find the fairways, play to his spots, attack when able. Just as clear, however, was that few in this field would adopt that conservative strategy. On three holes, Rory McIlroy unsheathed driver while Woods chose iron, with Woods surrendering nearly a hundred yards to one of the game’s preeminent drivers. McIlroy took advantage by carding seven birdies on his way to a first-round-leading 65. Averaging 331 yards off the tee, he said, “This course, it lets you be pretty aggressive off the tee if you want to be.”

Woods, meanwhile, averaged just 293.4 yards with his tee shots. That ranked him 136th in a field of 156 that also features senior tour-eligible past champions and 20 club professionals.

“The game is played very differently now,” he said, “and it’s very aggressive.”

Left unsaid was how Woods helped usher in that power era, bursting onto the Tour in the late-1990s by pounding tee shots with leg-snapping speed. All of that unleashed violence took a toll on his body, and now, at age 46, with more than a dozen surgeries combined on his knee and back, he has little choice but to find a different way to score. 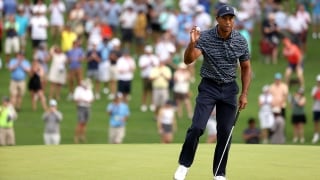 Watching McIlroy and Jordan Spieth walk 50, 75, sometimes 100 yards ahead at times Thursday, Woods marveled with LaCava at how much the game has changed over the past quarter-century.

Woods can still move it – three of his drives were 335 yards-plus – but it’s hard to say whether that’s sustainable with this body, on this course, for all 72 holes. He’s already nine back, and the Friday forecast looks diabolical. It’ll matter little if he doesn’t feel better.

Standing on stage, sore as hell, with no pressure on his right leg, Woods took only three questions from the assembled media.

“My leg is not feeling as good as I would like it to be,” he said. “But we’ll start the recovery process and get after it tomorrow.”