The PGA Tour released a revised schedule on Thursday outlining what a post-shutdown lineup might look like if play resumes in mid-June.

The new schedule has been pushed back three weeks to begin June 11-14 at the Charles Schwab Challenge, which was previously slated to be the Tour’s first event back on May 21.

The twist to the new lineup is the addition of the RBC Heritage (June 18-21), which was originally scheduled for this week. The Heritage, which was initially canceled by the Tour, takes the week vacated by the U.S. Open, which has been moved to September.

The first four events on the revised schedule will be played without fans, and according to a statement the Tour “will continue to monitor the situation and follow the recommendations of local and state authorities.”

The Travelers Championship (June 25-28) retains its original spot on the schedule and will be followed by the Rocket Mortgage Classic (July 2-5), John Deere Classic (July 9-12) and the Memorial (July 16-19), which had been the slot for The Open before that championship was canceled.

The Tour announced last week that the three playoff events, along with the Wyndham Championship, had been pushed back a week to accommodate the PGA Championship’s move to Aug. 6-9. The year’s first scheduled major will be preceded by the WGC-FedEx St. Jude Invitational (July 30-Aug. 2).

If the Tour can restart its schedule in June, it circuit will play 36 events in 2019-20, including the three postseason tournaments, which would be viewed by most as a viable season.

“If we start back mid-June, late-June, you could probably get away with it. Now, if that date gets pushed back it’s going to start getting tricky,” Charles Howell III said on Wednesday during a conference call. “I’m sure they have multiple scenarios written up, but you get pushed back from June, I don’t know. It would definitely seem like it wouldn’t be enough golf for a season.” 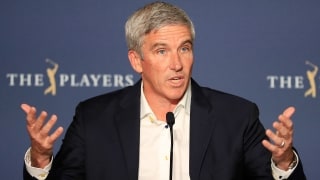 The PGA Tour officially announced Thursday its plan to restart the 2019-20 season in mid-June. So what will be different about the schedule?

The Masters (Nov. 12-15) would be preceded by the Houston Open and the fall portion of the schedule would conclude with stops in Georgia (RSM Classic) and Mexico (Mayakoba Golf Classic) in late November.

“We’d like to express our appreciation to the leadership of the Safeway Open, Houston Open and Mayakoba Golf Classic – which will conclude our calendar year schedule in Riviera Maya, Mexico – for their flexibility, which allowed for the U.S. Open and Masters Tournament to be played in the fall,” Andy Pazder, the Tour’s chief tournaments and competitions officer, said. “The accommodations will help the global golf community maximize the 2020 calendar, which will be incredibly impactful for our fans and put us in a strong position heading into 2021.”

Missing from the fall slate is the annual stop at The Greenbrier, which will no longer be part of the PGA Tour schedule, "per a mutual agreement" between the parties.

“We are very grateful to Governor Jim Justice and his Greenbrier Resort for a highly successful 10 years of partnership with the PGA Tour,” Pazder said. “Governor Justice’s vision and leadership helped shine a light on the men and women that serve our country through the military and first responder programs he implemented through the tournament, and The Greenbrier Resort was an incredibly unique and world-class venue that our players will always remember and cherish.”