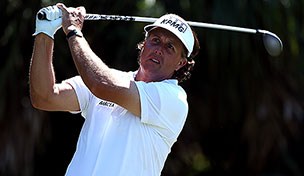 DORAL, Fla. – Maybe it was Tuesday’s drive down Magnolia Lane, or Wednesday’s range session with Butch Harmon, or the sight of Tiger Woods rolling again at Doral and the ghosts of 2005 swirling in his subconscious.

Whatever the tonic, count Phil Mickelson among the highly motivated this week at the WGC-Cadillac Championship, and as a rule good things happen when Lefty is properly fixated.

It was eight years ago, when Doral was a rare splash of South Florida flavor before the PGA Tour stop went WGC and corporate, that Mickelson and Woods put on a Sunday show. On a warm, sunny day the game’s alpha and omega delivered a title bout that old men in sandwich shops still talk about.

Woods and Mickelson finished 54 holes separated by two strokes and atop the field. On Sunday they traded nine birdies and an eagle. Woods closed with a 66 for a one-stroke victory, while Mickelson carded a 69 that included a closing attempt for birdie on No. 18 that caught the lip of the hole but drifted away.

Since then Woods holds the edge in head-to-heads when the two are paired together with an 8-6-2 record, but in recent years it is Mickelson who has taken a mano-y-mano edge in the game’s ultimate two-ball.

In the final round last year at the AT&T Pebble Beach National Pro-Am Lefty lapped Woods, carding a 64 to “Red Shirt’s” 75 and in 2007 at the Deutsche Bank Championship it was Phil again, 66 to 67.

Karma didn’t work out for Saturday. Graeme McDowell birdied his last two holes to take his place in the day’s anchor pairing with Woods, but that didn’t dim Mickelson’s hopes for a Sunday sequel in South Florida.

“I saw Tiger was playing well and I wanted to make a couple birdies to get in the group with him,” said Mickelson, who has posted matching 67s this week and is tied for third place, three strokes behind Woods. “It seems since 2007 when we played at Deutsche Bank in Boston, I've been playing some of my best golf when we get paired together.”

There was an intensity to Mickelson’s take on his time with Tiger that can’t be gleaned from printed sound bites. He wants this like he used to want In-N-Out burgers.

There are few, if any, as talented as Mickelson when he achieves the proper level of desire and this week at Doral he is motivated – in mind and body. Not bad for a guy who said he began this week “cautiously optimistic” following a two-week competitive hiatus and a rare trip to the practice tee after his round on Wednesday to work with Harmon.

“He seldom practices after a round but the wind was perfect for a left-handed player (left to right) and I asked him to hit some balls,” Harmon said. “It’s a lot of the things we’ve worked on in the past so it’s easy to get it back.”

The result has been plenty of birdie opportunities – highlighted by a few Phil moments, including a birdie off a cart path on Day 1 – and a chance to win his second Tour tilt of 2013 and a possible Doral re-do with Woods.

There’s also something to be said for Mickelson’s scouting trip to Augusta National on Tuesday with Keegan Bradley. For Lefty the home of The Masters is like a competitive B-12 shot.

“Seeing the course, playing there, and being on the grounds, having breakfast, having lunch there, overlooking the grounds and just playing there, gets me excited about the game,” Mickelson said of Augusta National. “There's something very spiritual about playing Augusta if you love the game as much as I do and going there gets me fired up.”

Nor should observers dismiss the fact that . . . well, there is less of himself to motivate these days. Mickelson said he’s losing about a pound a month and has lost about 25 pounds over the last two years, a byproduct of a better diet and a more intense workout regimen.

Mickelson actually began training in the gym earlier than ever this offseason and switched up his routine this week to work out before his round, not after, which has been the norm.

For Mickelson all these tumblers have fallen into place in perfect confluence on a perfectly familiar pitch. For golf it has created the opportunity for the perfect storm on Sunday at Doral – again.