Phil Mickelson may be 50, but golf is more fun when he's not acting his age 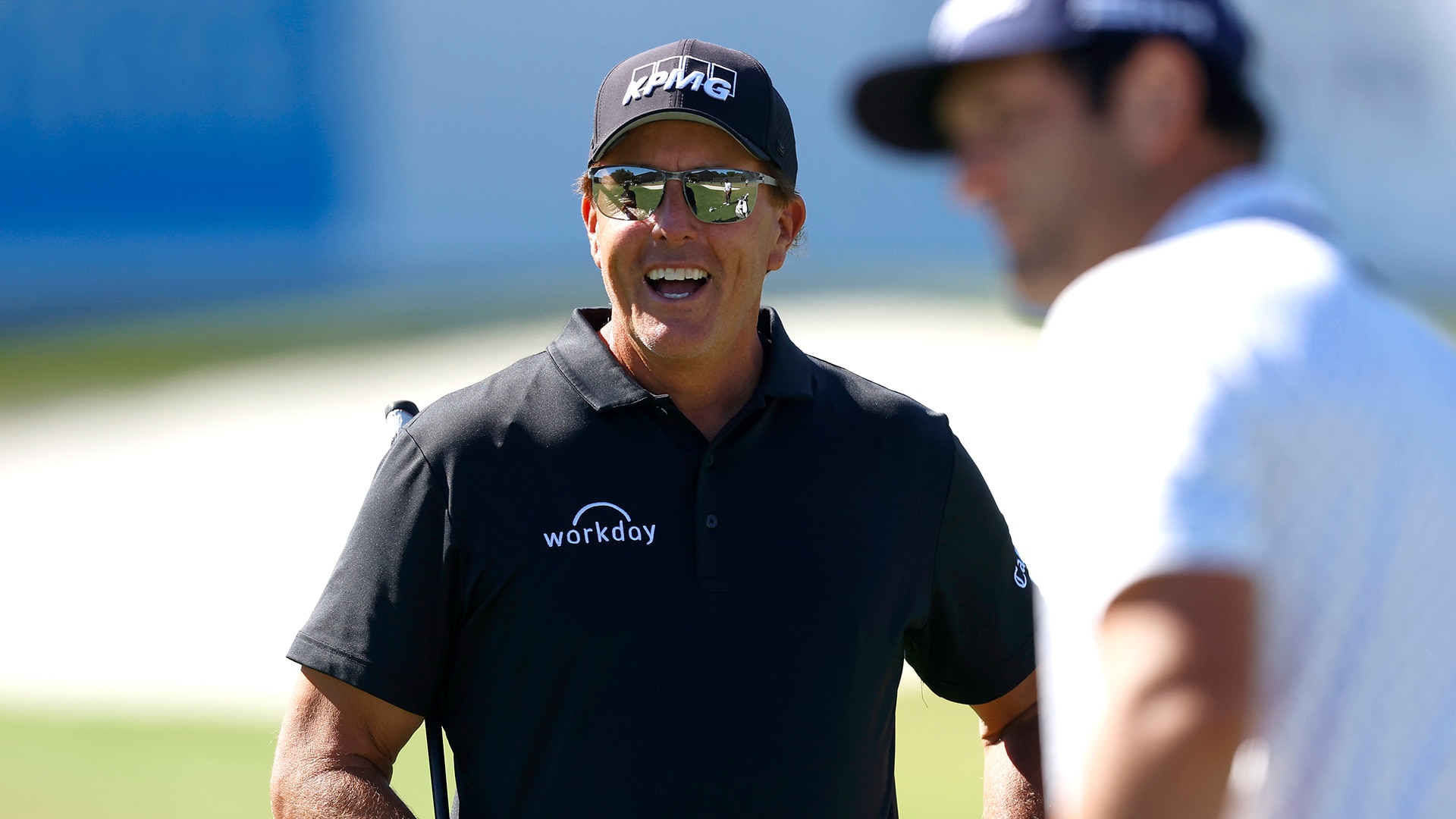 We ought to thank Lefty for the distinction in that phrasing, in the youthful enthusiasm he continues to gift us in a professional life that is more an adventure than a career.

You could hear Mickelson’s voice belying his age when he talked about the “hellacious seeds” he was preparing to hit a few weeks ago in “The Match: Champions for Charity.”

He sounded like a teenage skateboarder talking about one of his gnarly new tricks.

“Tiger likes to hit stingers, and those are cute,” Mickelson said. “A hellacious seed is going by a stinger so fast. ... Hellacious seeds are so hot and long.”

Yes, Mickelson’s seeds weren’t hellacious enough to win, but the good-natured fun in his commentary elevated the telecast. It was vintage Phil. He may have been denied laying claim as his generation’s greatest player, but he continues to be its greatest showman, its largest personality and its best entertainer, even as he becomes eligible to play for the PGA Tour Champions circuit. 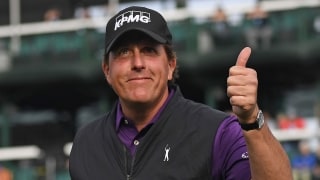 50 Phil facts for the legendary Mickelson

As Phil Mickelson turns 50 on June 16, Here's a look at 50 Phil facts, stats ranging from his days as a junior to his current status as a Hall of Fame legend.

Mickelson has rolled out more than a few humorous new ventures in his late-40s.

They have helped him remain as relevant as ever.

Two years ago, he broke out “The Worm” in that Mizzen+Main performance dress shirt commercial. He didn’t just agree to comically flop through a dance to an electro, rock and funk tune. He offered up the idea for the dance.

“It demonstrates how comfortable and versatile the shirt really is,” Mickelson cracked.

Actually, his wife, Amy, suggested “The Worm,” and Lefty loved it.

“I’ve kind of always laughed at myself and not taken myself too seriously,” he said.

Mickelson proved that again when he rolled out his "Phireside Chats" last year.

They included a conversation with comedic actor/writer Larry David, who said he watched Mickelson lose the 2006 U.S. Open. David wondered “what could possibly being going through that idiot’s mind” when Lefty hit driver at the 72nd hole.

“Well, I could share that with you,” Mickelson said. “But I don’t know, either.” 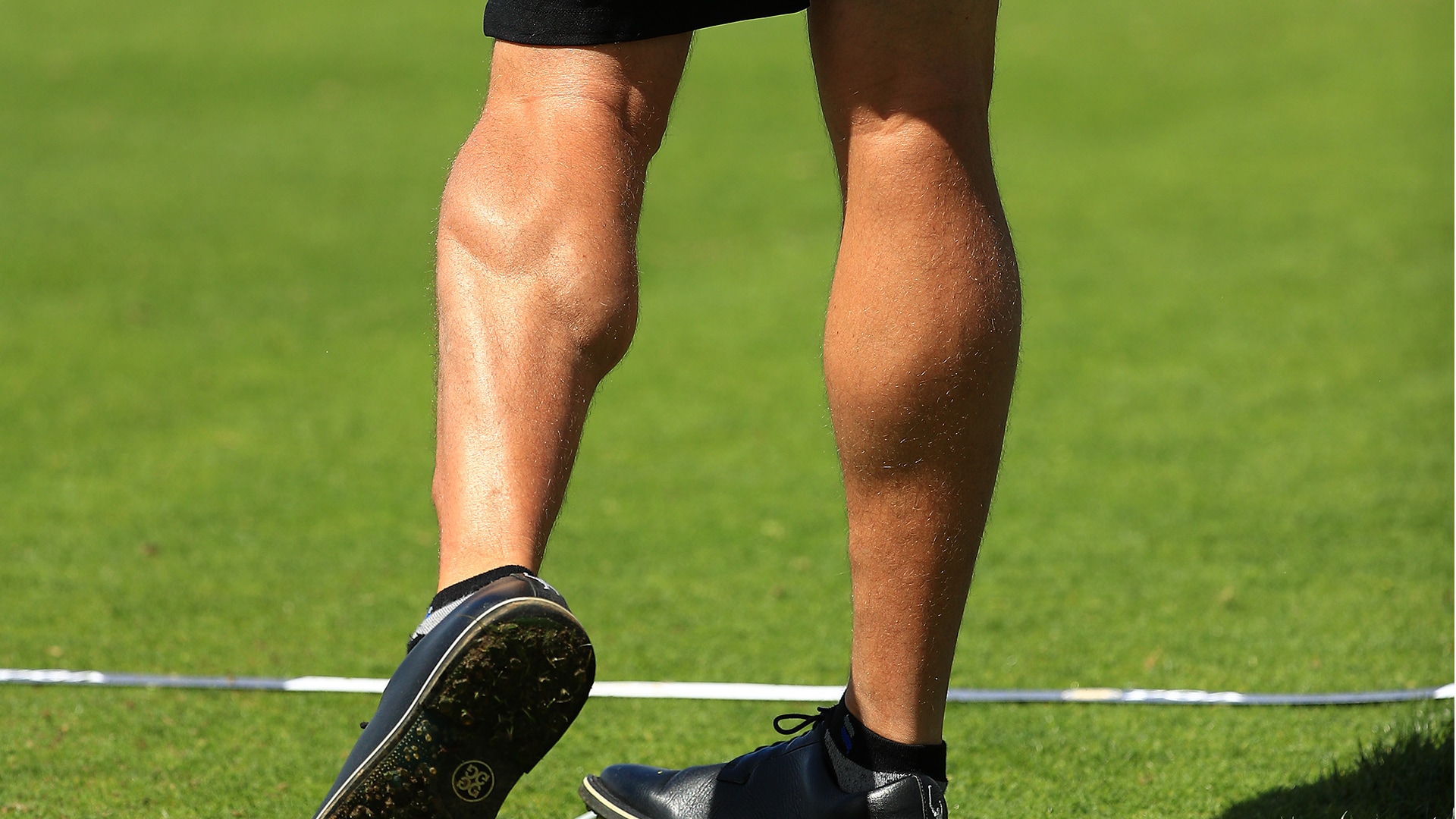 Lefty’s calf muscles became stars unto themselves last year, after he posted a photo on Twitter.

The photo led to the comical “Phil Kwon Do Calves” video workout.

“I’ve listened to you, I’ve heard you,” Mickelson said as he began the workout spoof. “You all want calves like Adonis, too.”

Born June 16, 1970, Lefty falls under the third astrological sign, if you are interested in those sorts of things. Of course, he’s a Gemini, the liveliest of the Zodiac’s “Air Element.” Geminis are known for their great company, for being youthful, curious and fun. They’re said to be ruled by the planet Mercury, which makes them fast, witty and skillful communicators.

Over the years, Lefty’s words have rivaled his shots on their impact on the game.

He did, after all, lead the revolt that overhauled the American Ryder Cup team construct.

It’s possible his opposition to the conclusions of the USGA and R&A’s Distance Insights Project could have equally impactful results.

He has strong feelings about the project and the governing bodies who oversaw it.

Lefty’s bold plays can be grandiose, whether they are inside or outside the ropes.

With Mickelson turning 50, it’s time to relish what we’re seeing before he’s gone from PGA Tour leaderboards and field lists.

It’s time to more fully appreciate every appearance Mickelson makes and how difficult it will be replacing him when he’s no longer playing. That doesn’t mean he’s washed up. That doesn’t mean he won’t win another PGA Tour event, or be a factor again, because he looks and sounds capable of being the best 50ish player we’ve ever seen. He won in each of the last two years.

It’s just time to cherish the moments that will make up this last act.

A look back through the career of World Golf Hall of Fame member Phil Mickelson.

Mickelson’s contribution to the game goes beyond his 44 PGA Tour victories and five major championships. It goes to how uniquely personable he is on every stage he visits, to how much more intimate he makes an event when he is in it, and to how much better that makes the tour experience.

It’s in more than the derring-do he still brings. It’s in his edgy charms.

Lefty, more than any other player today, has a way of making you feel like you’ve always got a front-row seat. Nobody draws you closer to the competition, and that’s beyond the times he knocked drives into your hospitality suite, then played a shot off the carpeted balcony floor, right in front of you, like he did aside the fifth hole at The Barclays in 2014.

He did that, by the way, in back-to-back rounds.

It’s beyond all those errant drives he hits into galleries.

It’s beyond the way his good humor heals his wounded followers.

“If your head was a little softer, I’d be in the fairway,” he good-naturedly told one of his victims at The Memorial in 2016.

It’s beyond the way he actually pays for damages his errant driving can do, like the time he broke a man’s watch with a misfire at Doral in ‘06 and then peeled off two $100 bills so the guy could buy a replacement.

There are so many memorable interactions in Mickelson’s adventures.

Back in ’09 at the Deutsche Bank Championship, with the gallery dwindling late in the first round at TPC Boston, Mickelson stepped to the ropes and asked who was hungry. He then dipped under the ropes, beseeching the gathering of 30 some folks to follow him. Like the Pied Piper, he marched them all to a concession stand, plopped down a batch of $100 bills and told the servers to give the gathering whatever they wanted.

The concession stand was being worked by a crew of freshman from Norton High School’s Class of 2012. Mickelson fed his faithful and then left a $160 tip for the few students still working there.