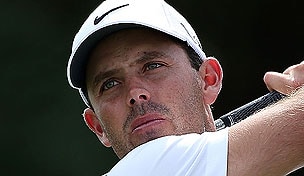 With the season's first major now just one week away, a full field heads to San Antonio in hopes of grabbing the final invite to Augusta National. The Valero Texas Open serves as the last opportunity for 137 of the 156 players in this week's field, each of whom needs a win this week to earn a trip down Magnolia Lane.

Ben Curtis returns to defend the title he won last year over Matt Every and John Huh. Here are 10 players to watch this week in San Antonio:

1. Charl Schwartzel: The South African remains remarkably consistent in stroke-play events, finishing no worse than T-16 thus far this season. Schwartzel is making his first start in this event, but is no stranger to playing well in the month of April.

2. Freddie Jacobson: The Swede enters on a tear, having finished inside the top 25 in five straight starts. He also has an affinity for TPC San Antonio, with top-five finishes in both 2010 (second) and 2011 (T-5). Last year he finished T-18 despite a 76 in the second round.

3. Matt Kuchar: The WGC-Match Play champ tied for 13th here a year ago, and enters off a tie for 14th in Tampa in his last start. Kuchar's trademark consistency has been on full display this year, as he has shot 72 or better in 19 of 23 stroke-play rounds this season.

4. Cameron Tringale: Though Tringale is still seeking his first PGA Tour win, that may change soon. The Yellow Jacket has recorded four top-25 finishes in his last six starts, including a third-place effort in Tampa. He tied for eighth here last year and finished in a tie for fifth the year prior.

5. Jim Furyk: Like Schwartzel, Furyk is making his first trip to TPC San Antonio. He has three top-20 finishes in six starts this year, marked by a tie for seventh in Tampa, and currently ranks in the top 10 on Tour in both driving accuracy and proximity to the hole.

6. Charley Hoffman: A great example of 'horses for courses,' Hoffman has six top-15 finishes in his last seven starts in San Antonio. While three of those came at LaCantera, each of the last three have been at TPC San Antonio, with Hoffman tying for second in 2011 and finishing T-13 in both 2010 and 2012.

7. Jimmy Walker: Walker fell back a bit with his tie for 50th last week in Houston, but still has made the cut in each of nine starts this year, with three top-10 finishes. Though he missed the cut each of the last two years, he finished T-3 here in 2010.

8. Brendan Steele: A champion here in 2011, Steele also tied for fourth last year. He's made seven of eight cuts thus far in 2013, including a T-6 finish in Phoenix, and broke par in all four rounds last week in Houston.

9. Marcel Siem: The German's runaway win last week in Morocco left him on the cusp of a Masters bid. Clearly playing well, he accepted a sponsor's exemption this week in the hopes that his stellar play will carry over to Texas.

10. Rory McIlroy: The great unknown in San Antonio. The Ulsterman remains a threat, especially among a relatively weak field, but outside of a Sunday 65 at Doral has appeared to be a shadow of his former self thus far in 2013.