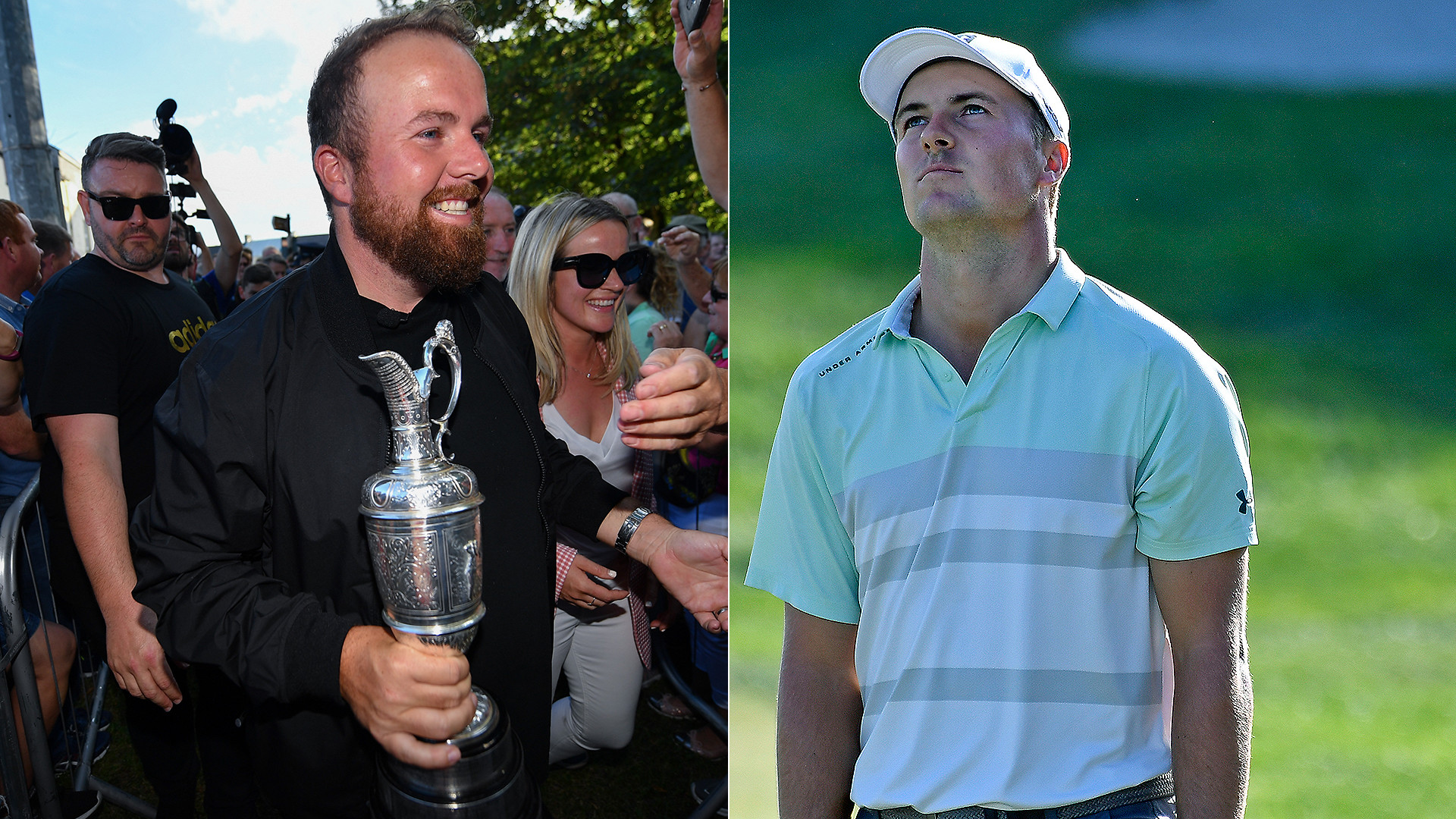 The PGA Tour season has come to a conclusion and our GolfChannel.com writers are here to reflect.

MOST MEMORABLE MOMENT OF THE SEASON (NON-TIGER MASTERS WIN DIVISION)?

RYAN LAVNER: Rory McIlroy’s second-round charge at The Open. Funny, because the most memorable moment of the season also came after the biggest letdown – when McIlroy roped his opening tee shot of the Portrush Open out of bounds, leading to a quadruple-bogey 8 and a first-round 79 that torpedoed his chances of winning the most important major of his career.

But then came Friday, and McIlroy’s spirited run on the back nine, with five birdies in a seven-hole stretch to scare the cut line and create pandemonium for the locals. He gave himself birdie opportunities on each of the last two holes, but ultimately he fell one shot short and blinked back tears afterward. Even in a crushing defeat, McIlroy produced some of the most electric golf we saw all year.

REX HOGGARD: It didn’t have the star power of Tiger Woods winning the Masters or the emotional appeal of Gary Woodland’s victory at the U.S. Open, but Shane Lowry’s convincing triumph at Royal Portrush had so much more. The Open’s return to Northern Ireland for the first time in more than a half century was perfect, from the course conditions to the crowds, and the Irishman’s performance provided the sentimental finish.

RANDALL MELL: “I got this!” Amy Bockerstette’s words echoed from the famed 16th hole at TPC Scottsdale near year’s start all the way to Pebble Beach and the U.S. Open in the summer. Gary Woodland told us he carried more than her words with him. He carried the attitude his friend with Down Syndrome showed making par alongside him during the Waste Management Phoenix Open pro-am. We heard him say as much after he pulled off the most delicate of chip shots, on the surface of the 17th green, to save par under pressure on the Sunday of his U.S. Open victory.

“She’s meant everything for me from a mental standpoint,” Woodland said after winning his first major championship. “Her attitude, her love of life, love for the game and her positive energy is so contagious.” The viral video nature of Bockerstette’s par in Scottsdale, the most engaged video ever on the PGA Tour’s Facebook page, stands testament to that.

WILL GRAY: It may not have had the biggest impact in real time, but Bryson DeChambeau’s 2-minute putt during the second round of The Northern Trust is a moment that could have significant consequences in the coming months and years. DeChambeau’s deliberate approach drew criticism from all angles, and it became a talking point that overshadowed an otherwise unremarkable event. But the fact that the incident drew fellow Tour pros out of their comfort zone and led to some pointed (and public) stances means it might just be the moment that gives actual progress to the movement to crack down on slow play.


BIGGEST SURPRISE OF THE SEASON?

LAVNER: Class of 2019’s early success. Every year, it seems, golf’s next young star is sent off into the pro world with big dreams and even bigger expectations. Maybe it’s Patrick Rodgers and Ollie Schniederjans. Or Beau Hossler. Or Norman Xiong. This summer it was the Big 3 of Matthew Wolff, Viktor Hovland and Collin Morikawa. I’d covered all of them extensively over the past few years, and I knew that they were future standouts, certainly, and Wolff in particular seemed to possess a starry quality that would endear him to golf fans.

But no one could have predicted so much success so quickly: A win for Wolff, then a win for Morikawa, and now a Tour card for Hovland. Against the best players on the planet, these studs – just a few months removed from college golf – were able to earn status for next season and beyond. So impressive.

HOGGARD: Nothing Phil Mickelson does should be a huge surprise anymore, but his victory in February at Pebble Beach qualified as a shocker. Although it was Lefty’s fifth triumph at the AT&T Pebble Beach Pro-Am, it was very much a surprise given his play in the months before and after his 44th PGA Tour victory.

MELL: Tiger Woods’ victory at the Masters was one of the most magical triumphs of any PGA Tour season, but that made the disappointment that followed as surprising as it was frustrating. He practically disappeared, competitively. His long breaks, his sparing play and his discomfort when he did play, that wasn’t what so many expected to follow.

GRAY: Jordan Spieth has been asked for months what he might take out of a lean 2019 season, and he’s constantly spun it forward in an effort to build a foundation. But this season will likely end up being a giant question mark for the three-time major champ, as he struggled wildly at points with his long game and largely squandered one of the best putting years of his career. Spieth narrowly missed East Lake last year and was expected to bounce back, but he found himself toiling around the 150 mark in FedExCup points as recently as May.

A top-10 burst that included a T-3 finish at Bethpage seemed to signal a turnaround, but in hindsight those results appear all the more remarkable given the valleys that surrounded them. Spieth has the innate talent to turn things around in a blink, but that talent only made his inability to create any sense of rhythm more bewildering.


PLAYER OF THE YEAR?

LAVNER: Brooks Koepka. Name the only player who won a major, a World Golf Championship event and another Tour title; who placed in the top 4 in every major; and who also finished in the top 3 in the season-long FedExCup. The year, again, belonged to King Koepka, and every Tour player knows it.

HOGGARD: On Sunday at East Lake, Justin Thomas was asked who should win the PGA Tour Player of the Year award. After a lengthy explanation of the merits of McIlroy’s season, which included three victories and 14 top-10 finishes, he concluded by saying that Koepka will win the Jack Nicklaus Trophy. McIlroy’s consistency was impressive, but majors are the ultimate barometer of success.

MELL: Major championship victories almost always distort the math in battles for PGA Tour Player of the Year honors, and it’s no different this year with Koepka and McIlroy vying for the award. They each won three times, but Koepka’s PGA Championship title and his remarkable consistency in this year’s majors (T-2, W, 2nd, T-4) trump McIlroy’s impressive overall consistency. Majors are like gold bricks on the scale we use to measure excellence in the game. As formidable as McIlroy’s Players Championship and Tour Championship titles were, and as meaningful as his Vardon Trophy is, they aren’t quite as golden as what Koepka delivered.

GRAY: McIlroy had the big payday, but the Player of the Year award should remain in Koepka’s possession. Put aside the fact that McIlroy would likely pay $30 million to trade his season for Koepka’s, which included a major and a WGC versus McIlroy’s Players and FedExCup titles. Koepka’s ability to shine on the biggest stages – all while professing that those are the only stages he really cares about – was remarkable. Only five men finished ahead of Koepka in a major this year, he came within a whisker of a nearly unprecedented three-peat at Pebble Beach and authored a largely dominant title defense at the PGA. McIlroy’s stat line was impressive, as were his brightest moments. But Koepka is the alpha of 2019.

LAVNER: 3M Open. What a pleasant surprise, with the inaugural event getting a significant boost with newcomers Wolff and Morikawa going head-to-head in the final pairing and the polarizing Bryson DeChambeau in hot pursuit. On the back nine the young pros combined for a whopping nine birdies and an eagle, with Wolff’s walk-off 3 cementing his status as one of the game’s next superstars.

HOGGARD: The season finale wasn’t supposed to be this good with the new strokes-based scoring and a field that didn’t include Woods, but it proved to be the year’s most compelling tournament (non-major). The new format delivered a final pairing of Koepka and McIlroy, the year’s two best players, vying for a $15 million payday. The Tour Championship might be contrived, but that doesn’t mean it’s not entertaining.

MELL: The Players Championship was as medicinal as it was exhilarating. The riveting, action-packed finish couldn’t have been better timed with the start of the year mired in an unseemly rift between PGA Tour pros and the USGA. McIlroy’s victory delivered so much Sunday fun, putting the focus back on competition itself, instead of all that ugly squabbling over the revamping of the Rules of Golf. Though a growing effort was underway behind the scenes to remedy player relationships with the USGA, the page seemed to turn with the action at TPC Sawgrass, with all the drama sweeping over us like a freshening breeze.

GRAY: McIlroy’s season will likely be defined by the wins he tallied at TPC Sawgrass and East Lake, but his game was never more electrifying than during the final round of the RBC Canadian Open. McIlroy turned a tight leaderboard into a coronation with a final-round 61 that looked for a while like it was going to threaten sub-60 territory. Throw in other highlights, like Brandt Snedeker’s second-round 60 at Hamilton and Graeme McDowell’s monster par save on the final hole to punch his ticket to Royal Portrush, and you have a compelling event.

But with McIlroy at the top, donning a Kyle Lowry Toronto Raptors jersey in celebration, and Shane Lowry notching a T-2 finish that would appear to have more importance a couple weeks later, and you have one of the best tournaments of the year.