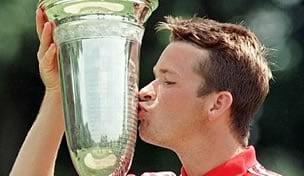 The U.S. Golf Association announced Monday that it would eliminate the men's and women's U.S. Public Links Championship after 2014. The event has been contested since 1922 and is the fourth-oldest USGA event; the men's winner was routinely given a Masters invitation. GolfChannel.com writers weigh in on if this was a good or bad move. (Click for a Publinx timeline and player reaction)

This was a bad move – and really bad timing.

If there’s a recent face of the U.S. Public Links Championship, a player who used the amateur tournament as a springboard to bigger and better things in his career, it’s that of Brandt Snedeker.

Which means that Monday’s announcement by the U.S. Golf Association that it will do away with the event after 2014 was a poor one on a few different levels.

The Publinx has always been the tournament of the people. In a day and age when golf still suffers from the image of an elitist and exclusive game, ridding itself of one of the few high-level tournaments that opposes that image sounds like an idea that’s counterproductive to the USGA’s message.

We keep hearing so much talk about “growing the game,” but it’s difficult to grow the game when you’re robbing some players of opportunities. I’m not naïve enough to think that the Publinx is the only way for a young amateur golfer to get his foot in the door toward being a successful professional, but the tournament has certainly helped players in the past while serving as that springboard.

What do these three have in common? They’ve each won the U.S. Amateur Public Links in the past eight years. Last year, of course, T.J. Vogel defeated Kevin Aylwin in a 12-and-10 rout. The event was held at Soldier Hollow in Utah. But surely you knew that already.

Enough with the feigned outrage. This is a good move. Sure, the Publinx possessed an everyman appeal: All public-links players can compete if they have the game. But the Publinx is no longer a can’t-miss event for the elite amateur. Seemingly all players today have equal access to U.S. Golf Association events, and the crowded summer schedule has diminished the tournament to the weakest on the USGA’s roster of championships.

What to do with the Masters invitation? Well, here’s a better idea: Make the individual NCAA Championship a 72-hole event, then award the winner a berth in the Masters. It’s already one of the three strongest amateur events in the country.

Executives from the U.S. Golf Association woke up Monday morning with several key issues very much on their plate – anchored-putting strokes and slow-play concerns among them. I would assume, though, that few, if any, calls had been fielded in recent weeks complaining that amateur players have too many high-level competitions at their disposal. That’s why I think their decision to eliminate the U.S. Amateur Public Links Championship after 2014 is a bad move.

Look, I understand that the current state of the Publinx is a bit different from its first iteration in 1922, a year before Bobby Jones won his first major championship. But while USGA executives may explain that it has drifted from its original mission, I have a tough time grasping how the event is any more outdated than it was 10 years ago when Brandt Snedeker won, or 15 years ago when Trevor Immelman took home the prize – both of whom played The Masters for the first time thanks to their wins in this event.

I am sad to see an event with such rich history end for any reason, especially in a retirement of sorts that comes without precedent. Elite, amateur-level competition is a fascinating subset of this great game, and it is unfortunate that the USGA has opted to eliminate one of the relatively few platforms upon which it can be displayed.