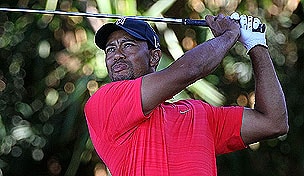 After a one-year absence, Tiger Woods is returning to Torrey Pines later this month – perhaps only because his asking price in Qatar was too high.

The president of the Qatar Golf Association courted Woods to play the Jan. 24-27 Qatar Masters, but ultimately could not land the world No. 3 because his $3 million appearance fee was too expensive.

“Tiger Woods demands $3 million just for an appearance if he were to compete in the Commercial Bank Qatar Masters, which is not worth paying for a tournament of $2.5 million prize money,” Hassan Al Nuaimi said, via Mai Akkad of Doha News.

At least that rationale is sensible. Last month, the resort owner at the Australian PGA curiously said that he didn’t want Woods at his event because he is “an emotional wreck” and “not a good example for kids.”

Though he won’t be in Qatar, Woods confirmed on his website Wednesday that he would make his season debut at next week’s HSBC Abu Dhabi Championship.

Mark Steinberg, Woods’ agent, said in an email to Bloomberg that Woods “was never contemplating Qatar.”