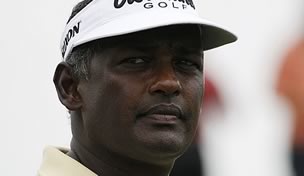 'I’m looking forward to some change in my body. It’s really hard to feel the difference if you’re only doing it for a couple of months.' – Vijay Singh, in an interview with Sports Illustrated on a company called S.W.A.T.S. – Sports with Alternatives to Steroids. According to the report, Singh paid one of the company’s owners $9,000 last November for the spray, chips, beam ray and powder additive. He also reportedly uses the spray 'every couple of hours … every day,' and 'sleeps with the beam ray on and has put chips on his ankles, waist and shoulders.'

'I am absolutely shocked that deer-antler spray may contain a banned substance and am angry that I have put myself in this position.' – Singh’s statement  after the report of his use of deer-antler spray, which contains a substance currently banned under the PGA Tour Anti-Doping Policy. Singh cited a 'bad back' and pulled out of the Waste Management Phoenix Open after the Sports Illustrated report came out.

'You don't get chances to shoot 59 very often. To have that putt on-line, I'm kind of mortified that it didn't go in.' – Phil Mickelson, after a 25-foot putt on the final hole for a 59 lipped out in the first round of the Waste Management Phoenix Open. Lefty's round featured 11 birdies, but he wound up making par on four of his last five holes to shoot an 11-under 60.

'It’s a little bit like a baseball pitcher when he has a no-hitter going. I was just handing him the putter and getting away from him.' – Mickelson’s longtime caddie Jim 'Bones' Mackay, describing their relationship on the course during Mickelson’s run at a 59.

'I don't mind bringing it up. I don't mind even saying something, but we didn't really bring it up. I'm not superstitious that way. I don't mind talking about it, because I was sure thinking it.' – Mickelson, again, sharing his take on the superstition of not discussing the possibility of a 59 while chasing golf’s magic number.

'We have not determined a reliable test for it. Players are regularly tested under the circuit’s anti-doping program.' – PGA Tour vice president of communication and international affairs Ty Votaw, confirming that, like many other professional sports leagues, the circuit does not test for either IGF-1 or HGH.

'Based on that analysis, not knowing that he was taking something that was illegal, Calc wasn’t suspended, quit using the product, was fine and nothing happened.  I don’t know why this same instance isn’t true for Vijay.' – Tom Pernice Jr., one of Singh’s closest friends, citing the Mark Calcavecchia case, from August 2011, when he was told by the Tour to stop using the 'Ultimate Spray,' as a reason why the Tour shouldn’t suspend Singh.

''I guess they could probably suspend him for a couple of months. I would think so.  Listen, people have had to pay the price before and he should be no different.' – Mark O'Meara, who doesn’t believe that Singh intentionally tried to cheat, but does believe the Fijian deserves a suspension.

''Deer-antler spray? That sounds like something you wax your car with, doesn't it? I've never heard of it. ... You have to be careful about what you take. I try not to take anything now, really, other than Corona and vodka.'' – Lee Westwood, one of many Tour players seemingly dumbfounded by the concept of a “deer-antler spray,” and the benefits it would have.

'I always check it because that's the one thing – I've never been drunk in my life, I don't drink alcohol. I've never done a drug in my life, so that's the one thing I never want to be caught when people say I'm a cheater. Yeah, I go to lengths to make sure everything is legal.' – Bubba Watson, explaining his stance on taking performance-enhancing drugs, in the wake of the Singh deer-antler spray scandal.