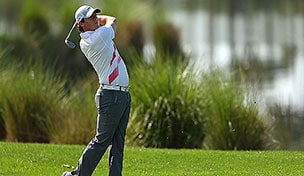 PALM BEACH GARDENS, Fla. – Rory McIlroy is still waiting for that first breakthrough round in competition with his new equipment.

With a bogey at the 18th hole Thursday at the Honda Classic, McIlroy posted an even-par 70 at PGA National’s Champion Course, leaving him tied for 60th when he walked off the course.

McIlroy is the defending champ this week.

“It would have been nice to finish off the round a bit better, but I can come back out tomorrow and hopefully give myself a lot of chances for birdies,” he said.

Sitting 106 yards out at the final hole, McIlroy thumped a wedge over the green, into a tough lie in the rough and couldn’t get up and down. He missed a 7-footer for par.

“I saw enough pretty good golf out there to be positive going into the next few days,” McIlroy said.

McIlroy said earlier this week his sluggish start is due more to a bad habit in his swing than any equipment issue. He said he has been outside the line with his takeaway and inside on his way to the ball.

“When you’re working on your swing a lot, it’s hard to commit to the shot you need to play every time,” McIlroy said. “If you know you should play a fade and you’re not comfortable with it, it’s hard to do. You just revert back to your habits.

“So, just a bit more work on the swing and try to get a bit more comfortable with that and should be OK.”