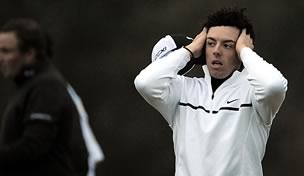 Getty Images
MALLORCA, SPAIN - MAY 13: Jesus Legarrea of Spain plays his approach shot on the 12th hole during the first round of the Open Cala Millor Mallorca at Pula golf club on May 13, 2010 in Mallorca, Spain. (Photo by Stuart Franklin/Getty Images)  -

That sound you hear is brackets busting across the country.

Highlighting the unpredictability of match play, both world No. 1 Rory McIlroy and No. 2 Tiger Woods were eliminated in the first round Thursday at the WGC-Accenture Match Play Championship.

Playing against Irishman Shane Lowry, McIlroy displayed some of the erratic ball-striking that caused him to miss the cut in his only other start in 2013. Lowry led for much of the back nine, building a 2-up advantage with three holes to go. Ultimately, a 4-foot par putt on the 18th gave Lowry a 1-up win over McIlroy.

Woods, meanwhile, found himself facing Charles Howell III, who told reporters prior to the match that he had never beaten Woods despite several friendly contests together. The pair combined for no bogeys on the day, the only match to do so, but accurate iron shots from Howell at both the 16th and 17th holes led to birdies and ultimately a 2-and-1 victory.

Among the other top seeds sent home were Lee Westwood and Adam Scott, both No. 2 seeds in their respective brackets, losing to Rafael Cabrera-Bello and Tim Clark, respectively. Jason Dufner, Charl Schwartzel, Keegan Bradley and Dustin Johnson also saw their weeks come to a premature close with opening-round losses.

As darkness fell on the course, two matches still remained in question and will be concluded Friday morning. Carl Pettersson holds a 1-up lead over Rickie Fowler with one hole remaining, while Gonzalo Fernandez-Castano and Francesco Molinari are all square with three holes to go. The winner of the former match will play Lowry, while the victor in the latter will face Howell.

Fourteen of the 16 second-round matchups for Friday are already determined. Highlights include a match between Matt Kuchar and Sergio Garcia in the Hogan Bracket, while Bubba Watson draws Jim Furyk in the Jones Bracket. Defending champion Hunter Mahan will face upstart Richard Sterne, who upset Dufner Thursday, while 2010 champion Ian Poulter will square off with Bo Van Pelt.