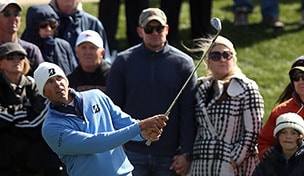 Through a freak snowstorm, biting cold and whipping wind, Matt Kuchar’s game was as steady as ever.

And on a blustery Sunday at Dove Mountain, fairways and greens – and a bunch of pars – proved to be the winning formula during the finals of the Match Play Championship.

Holding off a late rally by Hunter Mahan, Kuchar plodded along on a day when the temperatures hovered around 50 degrees and the wind blew as hard as it had all week, winning his first career World Golf Championships event, 2 and 1, in the scheduled 18-hole final.

“To be so precise in this much wind was so difficult,” said Kuchar, who earned his fifth career PGA Tour title. “What we battled through was awfully difficult out there.”

Mahan, the defending champion, had been dominant all week at Dove Mountain. But on Sunday afternoon, he bogeyed the fourth hole to snap a streak of 169 consecutive holes without trailing, lost another hole on No. 5, and then dropped his third straight with a three-putt at the sixth. Kuchar also won No. 8 to move to 4 up. (By comparison, Mahan had lost only seven holes through the first 76 holes.)

Mahan won his first hole, the 10th, with a par, then cut his deficit to two holes with a birdie at the 11th. On the par-5 13th, Kuchar got up-and-down from short of the green to extend his advantage to three holes. Mahan won No. 14 to go 2 down, then watched as Kuchar airmailed the green on the par-3 16th and left there only 1 ahead.

Mahan’s tee shot on 17 drew a bad lie in the fairway bunker, and his second shot came to rest in the desert, in a cactus bush, short of the green. Playing from the same bunker, but with a better lie, Kuchar stiffed his approach to 3 feet to win the match, 2 and 1.

“Absolutely every facet of your game was tested today,” Mahan said. “Kuch, I think he deserved to win because he did a better job in every facet than I did.”

With the victory, Kuchar, who improved to 15-3 in this event, is expected to move from No. 23 to No. 8 in the world ranking – his highest position since last June.

In the consolation match, Jason Day won three consecutive holes on the front side to take the lead against Ian Poulter. The Australian then tacked on wins at Nos. 12 and 14 and held on for a 1-up victory.