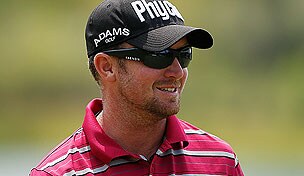 HUMBLE, Texas – Steve Wheatcroft hates going to Monday qualifiers. He was reminded Friday why they can be worth it.

Wheatcroft, who narrowly qualified for the Houston Open at the start of the week, ran off three straight birdies early in his round and kept bogeys off his card for a second straight 5-under 67. That gave him a one-shot lead over D.A. Points and Jason Kokrak going into the weekend at Redstone Golf Club.

Rory McIlroy also will be around for two more days, but just barely.

In only his 10th full round of the year, McIlroy walked onto the seventh green – his 16th hole of the day – and saw that he was tied for 77th. He two-putted from 85 feet on the fringe for birdie on his next hole, and then safely found the green at the par-3 ninth for a 70. By the end of the day, McIlroy made the cut on the number.

''It’s a weekend where I can have a couple more rounds and try and get confidence in what I'm doing,'' McIlroy.

His big surprise came later. McIlroy, feeling as though he needs more rounds to get ready for the Masters, decided to enter the Texas Open next week.

Phil Mickelson also made the cut on the number after a bogey on the last hole for a 71. Mickelson, who has played the Masters with two drivers in the bag, decided to play Redstone on Friday with two 3-woods in the bag, though one of them is so strong it acts like a driver.

''If I can play like I did the back nine, I'm going to give myself a lot of birdie chances,'' Mickelson said.

Wheatcroft can't bank on anything.

Not only does he have no status on the PGA Tour, he has only conditional status in the minor leagues. After missing out on a Web.com Tour event last week in Louisiana, he figured he might as well enter the Houston Open qualifier Monday.

''Monday qualifiers are terrible. They're just not fun, plain and simple,'' Wheatcroft said. ''I was on the PGA Tour in '07, played terribly. I had no status. So I had to be back to Monday qualifiers and pre-qualifiers the next year. I hate them.''

Wheatcroft had some good sessions with swing coach Matt Killen, felt his game was getting better in the last month, and figured it was all about timing. He made it by one shot into the field, and he's playing well against a strong field at Redstone.

He was at 10-under 134, the first time he has ever been atop the leaderboard on the PGA Tour. The tournament is only halfway over, and Wheatcroft has been around long enough to not look too far ahead. Even so, this has Cinderella ramifications.

Wheatcroft can become the first Monday qualifier to win on the PGA Tour since Arjun Atwal at the Wyndham Championship in August 2010. A win would put him into the Masters for the first time, and perhaps more importantly, give him a two-year exemption.

''If I can be on top of the leaderboard at this point, I know I can keep playing well,'' he said. ''There's no reason to think I can't. I've never won on the PGA Tour. I've won on the Web.com Tour – I've won by 12. I know I can keep going forward. Who knows? I could shoot 61 tomorrow. I could shoot 81 tomorrow. I really don't know. I'm not going to sit here and think about it too much. I'm going to think about the first tee ball and we'll go from there.''

Points had a 71 with 17 pars and one birdie. He didn't make anything on the greens, which he attributed to his putting stroke and firm, afternoon greens instead of the old putter he once borrowed from his mother.

''I made everything yesterday and made nothing today,'' Points said. ''To be one shot back and be right in the mix is huge.''

Kokrak at a 69 and will play in the final group with Wheatcroft, whom he knows well.

Stewart Cink, winless since the British Open in 2009, showed more signs of getting his game on track. Cink contended in the Humana Challenge on late Sunday afternoon, and feels as if he's getting closer. He had a 66 and was tied for fourth with Brian Davis (70). Two-time major champion Angel Cabrera, the Argentine who has a home at Redstone, had a 72 and was four shots behind, along with Bill Haas (70) and Cameron Tringale (73).

Also lurking was Dustin Johnson, who threw away careless shots but was still only five shots out of the lead.

McIlroy remains a work in progress. He started slowly, not giving himself many birdie chances and hitting tee shots some 20 and 30 yards short of Johnson and Keegan Bradley. But the 23-year-old from Northern Ireland made birdie on the par-5 15th, followed with an 18-foot birdie on the 16th, and then cut loose with a tee shot that was some 20 yards beyond where Johnson hit his drive.

That wasn't an accident. McIlroy tends to hold back early in his round until he gets more comfortable with his scoring.

''The game is fickle,'' he said. ''You make a couple of birdies, a few good shots, and your confidence goes up. A few bad ones, and it goes down a bit. I hit a couple of drives, and 17 is a good example, when I let it go and it's fine. It gets out there.''

McIlroy said he hasn't played enough tournaments to get into that groove, and he was at least happy to have two more chances at the Houston Open. He headed to the practice range after lunch, and then decided to make sure he played some more by signing up for the Texas Open.