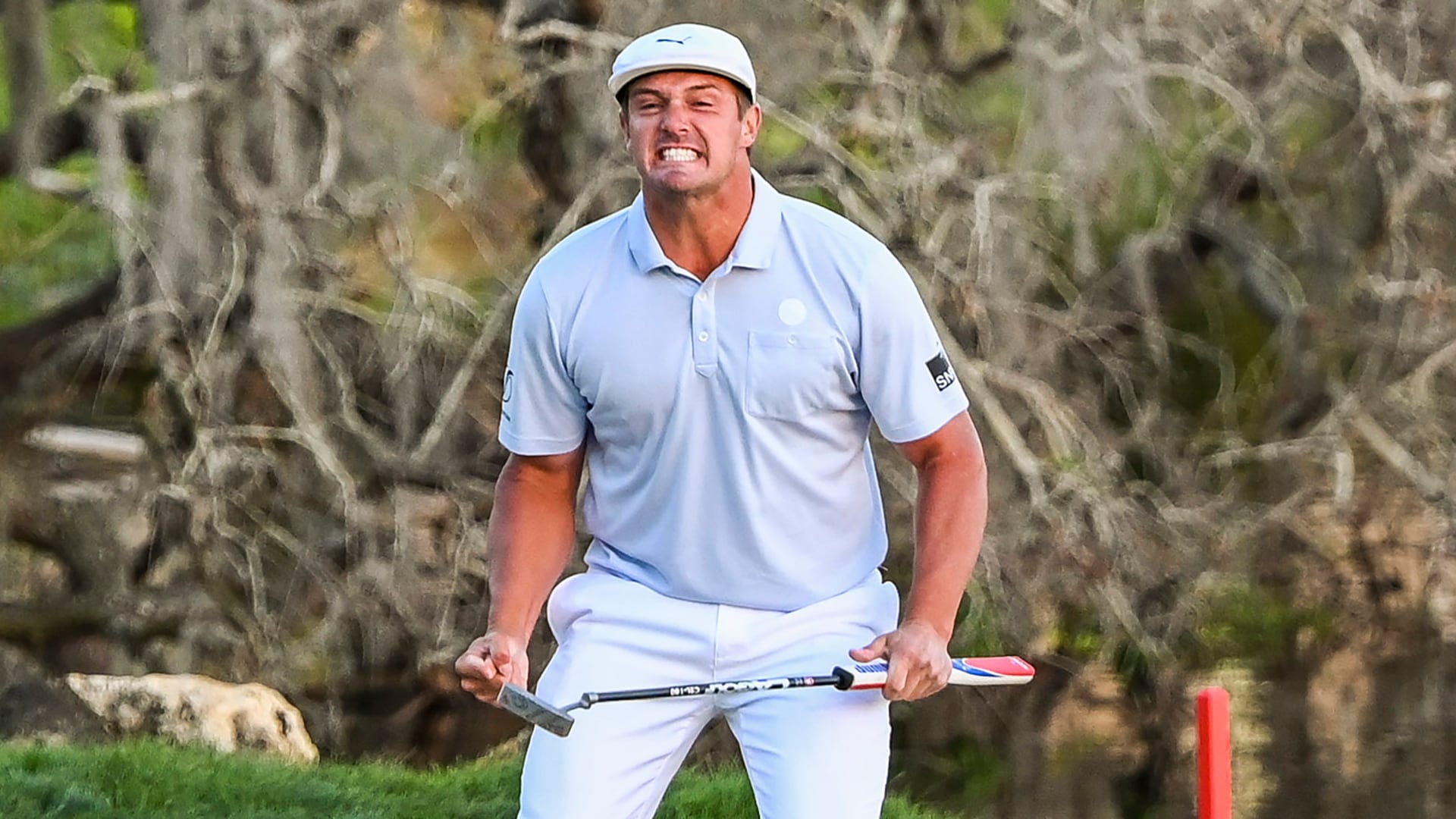 With your win at Bay Hill, you’ve added more attention and relevance to the distance debate. Even though it’s one that can cause some people to glaze over, the conversation persists as the most provocative and important in the sport.

But for all the gnawing away, there is a lot of meat on the bone. No issue quite gets to the core of what people believe is best for the game, or what it should be about. With DeChambeau as the timely illuminator, the following is an attempt to clarify one side of the argument.

As someone who agrees with golf’s governing bodies, that the trend of increasing distance “is taking the game in the wrong direction,” let me start by saying two things:

For one, I often hear people say that regulating distance through some sort of equipment rollback would take the game backward, stifling innovation, enjoyment and the economic health of the golf industry. But the ruling bodies have publicly stated that that their intent is to take golf forward, to make the game, particularly recreationally, more affordable, faster, more environmentally sustainable and more welcoming.

I’ve always focused on the top of the pyramid. To me, the elite professional game in any sport – NFL, NBA, MLB, etc. – is what we most watch and talk about, the one we measure against, the one with the most history, the one that is most important and interesting. The more that sector retains its celebration of all facets of athletic skill and challenge, the better. Perhaps that is looking backward in order to look forward.

Secondly, what can seem contradictory to many can also be true. For example: Bryson is good for the game, and more distance is not.

DeChambeau represents what most energizes any sport: an exceptional athlete chasing greatness with an uncompromising, no-limits obsession. It’s about more than just being the best. It’s about being transformative in changing the way the sport is played. The greatest examples have been Harry Vardon, Ben Hogan and Tiger Woods. DeChambeau, in a very short time, is threatening to join the club.

He’s taken on his mission with intelligence, discipline, courage and a contagious love of the game. He is doing the most difficult thing in golf: hitting tee shots as far as he can, while retaining sufficient control. And arguably no player in history has ever, in the period of one year, worked as hard or effectively to remake his game and get dramatically better.

But if I’m so pro-Bryson, the guy who is supposedly breaking golf, how can I also be pro-USGA/R&A, the game’s assigned protectors? It’s because DeChambeau’s most revolutionary act was picking low-hanging fruit.

Since DeChambeau’s six-shot tour de force at the U.S. Open last September, it’s undeniable that he is much more than a one-trick pony. But his decision to prioritize speed and distance came after determining, based on strokes-gained analytics and watching Brooks Koepka’s emasculation of Bethpage Black at the 2019 PGA Championship, that the long ball is the most effective way to separate from the pack.

Bryson is not breaking the game. He’s gaming it. And exposing it. Which will valuably inform, incentivize and intensify the USGA and R&A’s focus on finding substantive solutions to the distance problem in the elite game.

Let’s consider the 555-yard sixth hole at Bay Hill, which over the weekend replaced the 13th hole at Augusta as the best microcosm for the distance debate. Yes, watching DeChambeau carry 330 yards of water and come within 100 yards of the green was great theater. Like anything of grand scale being done for the first time after once seeming impossible, it was a must-watch.

But let’s assume, not unreasonably, that DeChambeau won’t be the last to bite off that much or more, or that he’ll be the first of many. Is less than 100 yards left for a second shot into a par 5 what we really want the game to become? Is that good for the game? In my opinion, no more than if the majority of offensive possessions in the NBA ended with a dunk, or if the majority of hits in the MLB were home runs, or if most of the offensive plays in the NFL saw a quarterback dropping back and throwing a bomb for a touchdown.

To say that limiting distance is about punishing DeChambeau for what he’s accomplished – an advantage honestly gained – is to misunderstand. Anything he has earned athletically should be exalted, never be taken away. But his real edge is most accurately measured not in distance but in power.

That’s an important distinction. I may be against more distance in the elite male game, but I am all for power retaining its place as perhaps the most important tool for a tour player.

It’s the attribute that has often marked the dominant players. It’s the through-line in the historical succession of Bobby Jones, Sam Snead, Arnold Palmer, and especially Jack Nicklaus. Tom Watson, Seve Ballesteros, Greg Norman would follow, and then there was Tiger.

Reducing distance in the game does not reduce power. And some sort of a rollback would not undo all of DeChambeau’s work.

Power, in many ways, defines sport. It’s the main engine for the Olympic motto of “faster higher, stronger.” It should never be curtailed or handicapped at the highest level as it sometimes is in horse racing, where the fastest horse is forced to carry extra weight.

But because humans evolve and improve physically and technically, athletes in all sports are continually gaining more power. And it has forced many sports to consider rule changes in the interest of ensuring that power does not become more important than overall skill.

In football, the goal posts were moved back and later narrowed when the range of place kickers increased to the point that too many games were being decided by long field goals. In basketball, the lane was widened so that, along with the three-second rule, the biggest men could not camp under the basket. Baseball has been the most responsive. In times when pitchers were deemed to have become too dominant, outfield fences were moved in, the strike zone was narrowed, and the ball was given more pep. Conversely, when there were too many home runs, the ball was deadened, as it will be for the upcoming season.

Similarly, in tennis, when powerful serves became overly important, the ball was discretely slowed down. Boxing evolved from bare knuckles to ever-more padded gloves. The knockouts might not be as violent, but the power of the boxer is still the determiner.

This hasn’t happened much in golf, and the Distance Insights Project is probably several years away from any definitive action.

The controversy over distance in golf is nearly as old as the game itself, but it dramatically accelerated in the early 2000s with a style of play dubbed bomb and gouge, which rose after a wave of equipment innovation that significantly increased the distance pros hit the ball. Rather than prioritizing putting tee shots in the fairway, players figured out that percentages were often in their favor by driving as long as possible in order to be left with as short an approach as possible, even if it was played from the rough.

That style worked best in regular events, where the rough was less punishing, but proved problematic in major championships with high rough. But as distance has advanced, the drives have gotten longer and the yardages left to the green have gotten shorter, so much so that a far greater percentages of approaches are played with wedges. That has changed the equation so that the bomb-and-gouge template is more prevalent than ever – even in majors.

DeChambeau rolled out the bomb and gouge 2.0 version at Winged Foot, and proved it was no fluke at Bay Hill, where all the speed training and technical work he does with a brain trust that includes Chris Como and long drive champion Kyle Berkshire showed that he is only getting longer.

It would be misleading not to point out that DeChambeau has continued to improve in every area of the game. Several of longer iron shots at Bay Hill were stunning. Even as Patrick Reed has tried to convince him to shorten the shaft length of his wedges, DeChambeau keeps developing more variety and touch around the green. And his putting looks more solid, especially under the gun.

But I would hold that the game he is playing – and by example encouraging others to play – provides less variety than the game played by previous champions of the last 50 years, both in the number of different clubs and the types of shots attempted. It brings that awkward word – “de-skilling” – into play. Which, to me, means the greatest game is not quite as good as it used to be, even as the most interesting figure in the game has already established himself as an improver for the ages.

I would hold that the challenge at the highest level has been somewhat compromised, and that the ruling bodies are right to be concerned and ready to step in. As they themselves concede, they have waited too long to do so.

But now DeChambeau has shined a brighter light than ever on the imbalance.

So again, thank you, Bryson.

And may your mission to ride power to the top continue unabated. 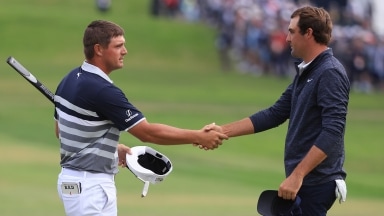