Wind and rain may be only defense against Woods 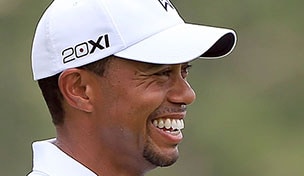 ORLANDO, Fla. – The early forecast, the one meteorologists always stress is subject to change, calls for a chance of showers and thunderstorms Sunday at Bay Hill, with wind gusts up to 35 mph.

And there it is, a sliver of hope. Because inclement weather might be the only thing stopping an ultra-motivated Tiger Woods.

“Just because I’ve won here doesn’t ensure that I’m going to win the tournament,” said Woods, which is true, of course, even if the numbers tell a different story.

The largest 54-hole lead Woods has ever surrendered was two strokes, at the 2009 PGA Championship. And last we checked, Y.E. Yang is not expected to make a cameo here.

“Tiger has made No. 1 his destination,” John Huh said. “If he plays well here, there isn’t anything we can do about it.”

Who will step up and make Tiger sweat Sunday?

Well, there are a few boldfaced names lurking.

In two hours Justin Rose went from four shots ahead to two strokes behind, then was criticized by Johnny Miller on the NBC telecast – “He hasn’t learned how to be good in the clutch yet,” Miller said.

Bill Haas, a four-time winner, had a share of the 36-hole lead, but made two double bogeys Saturday and dropped three shots back. Another stroke behind is Keegan Bradley, the 2011 PGA champion, who might have too much ground to make up.

So the spotlight will fall on Rickie Fowler, thrust into the final pairing with Woods once more.

You may recall their first encounter. From Fowler’s perspective, it was rather forgettable.

Playing in the final group at last year’s Memorial, Woods waxed his playing competitor by 17 strokes, 67-84, while winning the second of his three titles last season.

“After Memorial, I’m looking for a little redemption,” Fowler said. “I’m feeling good about the pairing, about my game. He’s definitely the guy to beat, but I’ll be right there to see what’s going on. … So I’m going in there with the attitude that I have nothing to lose, and we’ll see what happens from there.”

Also in the go-for-broke category is Rose, who outplayed Woods over the first two rounds here and enjoyed the accompanying circus.

There was quite a different vibe Saturday, when he pegged it alongside Haas in the final group. “It felt like a Thursday on the first tee today,” Rose said.

No buzz. No roars. No energy.

If the wind is up Sunday, and no player is making a move, Woods can put Bay Hill in a half nelson and par the place to death. There is a certain beauty in the silence.

Last year, at the WGC-Match Play, Gonzalo Fernandez-Castano found Woods in flux, full of noise. Fighting his swing during their opening-round match, Woods didn’t play well but still eked out a narrow victory.

“He’s definitely more comfortable,” Castano said after being paired with Woods again on Saturday. “Last year his routine was longer; you could see he wasn’t comfortable with what he was doing. Now he just stands over the ball and hits it. And he hits it good.”

Woods is likely to do the same Sunday, as he has done so many times before at Bay Hill.

Which is why for the Spaniard, the game plan is simple: Make birdies. Lots of them. In conditions that might not be conducive for scoring.

“Hopefully I can give him a few headaches,” he said.

And then he smiled, knowingly.

“But I don’t think so, if he keeps playing this way.”