Woods chasing down No. 1 ranking 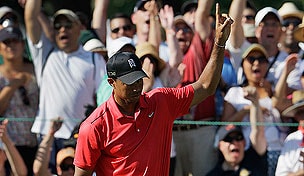 WHITE SULPHUR SPRINGS, W. Va. – Tiger Woods is going to be the No. 1-ranked player in the world again.

I know this not because I'm clairvoyant nor because I'm extrapolating recent results into greater success in the future.

No, I know this because I can do math.

Well, at least the math used to calculate the Official World Golf Ranking.

When Woods won the AT&T National on Sunday, legions of observers were flummoxed to realize that he soared from fourth amongst the world order all the way up to ... fourth.

Why didn't he move up at all? Again, it's just math.

World ranking points are accumulated over a two-year rolling period, with each 13-week period receiving additional emphasis to promote recent activity. Those points are then calculated using a divisor of tournaments played during those two years. There’s a maximum divisor of 52 and a minimum divisor of 40.

Here’s where it gets interesting for Tiger.

His divisor hasn’t been above the minimum number since the week of June 17, 2007 – more than a half-decade ago. Since then, his tournament total has often been well below 40, the result of injuries and other absences from the game. Currently that number stands at 34, meaning that his world ranking factors in a half-dozen goose eggs that never actually happened.

That’s equivalent to a Major League Baseball player being saddled with an 0-for-4 performance every time he doesn’t play.

However, that could be changing soon enough.

Already this year, Woods has competed in a dozen tournaments – 11 on the PGA Tour and the Abu Dhabi Championship on the European Tour. That's already equal to his total from last year, when a knee injury sidelined him for close to four full months.

By my count, Woods likely has eight regular season PGA Tour events left on his schedule. That includes this week’s Greenbrier Classic, followed by The Open Championship, WGC-Bridgestone Invitational, PGA Championship, The Barclays, Deutsche Bank Championship and Tour Championship. Although, yes, it's possible that he could skip one of the four FedEx Cup playoff events – as he's done in the past – and could rearrange any potential plans due to injury and/or weariness.

That won't mean his season ends at East Lake.

Woods is considering adding a start at the Turkish Airlines World Golf Finals, which won’t carry world ranking points, but could follow that with appearances in the WGC-HSBC Champions and Australian Open prior to defending his title at the erstwhile Chevron World Challenge, which will take place this December – with or without a sponsor.

Competing in each of those events would give Tiger close to two dozen worldwide starts this year, easily above the one-year average of 20 needed to reach the OWGR minimum divisor.

If he was to continue on this current pace into next season, he would easily reach 40 tournament starts in a two-year rolling calendar by the summer of 2013.

Why is that so important? Think about it: Instead of dividing his total points from 34 events by the number 40, he would instead have those points divided by the same number as every other world-class golfer, finally putting them all on a level playing field, as far as the OWGR goes.

Of course, the biggest X factor is – and always will be – getting the best results. Reaching the divisor of 40 events doesn't automatically mean a world-class player will move to the head of the class, just as Woods has proven that failing to reach that number doesn’t necessarily ensure that he can’t climb past everyone else.

If he does continue the current trend, though, look out below.

Of his dozen starts so far this year, Woods doesn’t only own those three wins; he also has one second-place finish and a third. A two-year rolling period that includes similar results while reaching that divisor should garner a reward of No. 1 status once again.

Scratch that. It will definitely move him to No. 1 again.

Not that Woods is focused on world ranking points or playing enough events to surpass the minimum divisor. He isn’t motivated by such things, nor the rewards they can reap.

That doesn’t mean he isn’t acutely aware of what playing more tournaments – and playing them well – can mean toward becoming the world’s top-ranked golfer once again.

Tiger knows exactly how the system works. As he said this week, “Yeah, I can do math.”