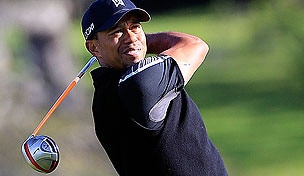 ORLANDO, Fla. – In over a decade of observation, the one absolute truth about Tiger Woods is that there will always be a perpetrator or panacea, depending on how the numbers add up after 18 holes.

“I didn’t drive it well, didn’t hit my irons well and didn’t control my distances well or my trajectory,” Woods figured after a breezy 69 at Bay Hill on Thursday that left him four strokes adrift of pacesetter Justin Rose.

As it applies to Woods’ Day 1 card the statistics would suggest he missed the primary culprit – putting.

However, for analyst, be they armchair or otherwise, whenever Woods has failed to meet expectations, it has often been his wayward driver that has been deemed deficient after a cursory study of the statistics.

It’s an understandable theme given Woods’ ability to overpower golf courses if he can find the short stuff off the tee, but scientifically misguided. Just ask Sean Foley, Woods’ mercurial swing coach who has dissected the geometry of the golf swing like an MIT scientist.

Photos: Tiger Woods through the years

For those who may think Foley’s take is a tad defensive, know that Hank Haney before him made a similar claim for years and that the science of clubhead and golf ball support the theory of diminishing returns when you add distance.

Let Professor Foley explain, “When you lower spin a ball can really go off line. That’s why drivers go the most right or left.”

All of which makes Woods’ improvement off the tee under Foley – he finished 55th in driving accuracy last season, his best showing since he was 54th in 2000 – meaningful, particularly at Bay Hill.

The idea is that if he can drive the ball well at Arnie’s place . . . well, you know the rest.

On the five occasions Woods hit driver on Thursday at Bay Hill, he connected with fairway four times, including a towering 350-yard downwind effort at the par-5 16th that set up a 9-iron approach shot and 5-foot eagle putt that he converted.

In practical terms, that combination of power and precision led to a 5-under day on the par 5s, a benchmark statistic that suggests the key parts of his game are, if not fully engaged, trending in the right direction.

“I took care of the par 5s,” Woods said. “I didn’t birdie them the way I’d like to. Except for the eagle on 16, the other ones were not very good shots. Hitting it up on the green and making a putt.”

Still, Woods’ play on the par 5s – and specifically the drives that set the stage for his three-birdie, one-eagle line – might explain the relaxed vibe he had when he walked off the course just after lunch.

Or maybe it was his track record on the Central Florida layout that had Woods looking like a man who just clipped his playing partners for a $5 press on the last hole.

In his seven victories at Bay Hill, Woods has opened with rounds better than 69 just twice and was at the same 3-under mark at this stage last year when he went on to a five-stroke triumph.

So forgive the defending champion if a “stubbed toe” at Nos. 17 and 18 (bogeys), followed by a “bad mistake” from the bunker right of the green at the par-3 seventh hole (bogey) didn’t prompt a panicky trip to the practice tee after his round.

The truth is that despite what the misleading statistics suggest, the science of swing shows that he’s driving the golf ball as well as he has in over decade, which is a chilling thought considering his track record through the early 2000s.

If he needed any fine tuning heading into Friday’s round, it was on the putting green. Now where is Stricker when you need him?