While many mess up, Jon Rahm clutches up to win U.S. Open at Torrey 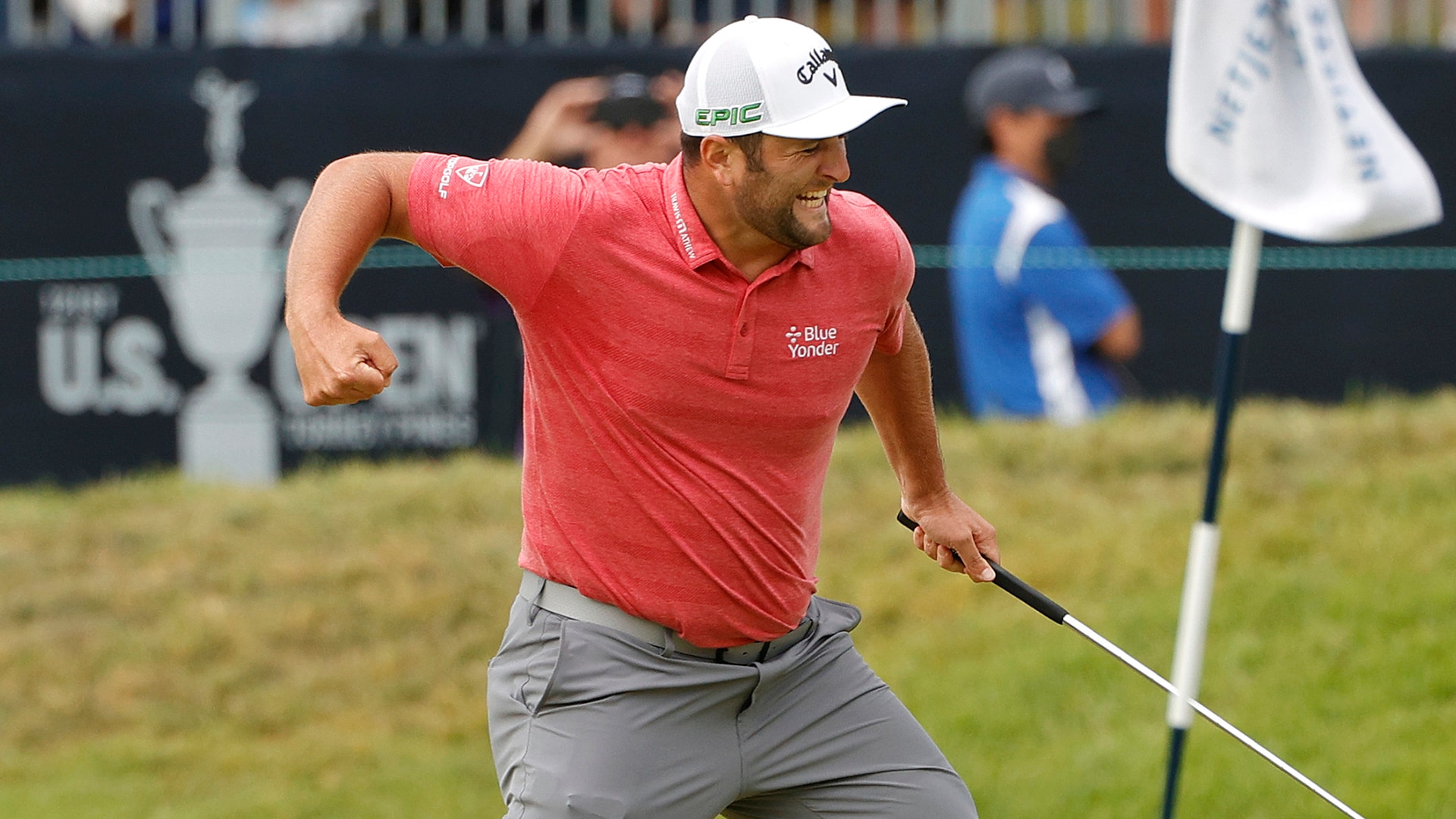 Those wanting U.S. Open carnage finally got it Sunday at Torrey Pines. But don't worry, those wanting fireworks weren't neglected. Jon Rahm dodged past a slew of falling stars, from Bryson to Rory to Brooks, and then outdueled Louis Oosthuizen with clutch birdie putts on the final two holes to finally capture his first major championship.

Here’s everything you need to know from an exciting finish in San Diego:

How it happened: One moment at this U.S. Open there were four players tied for the lead and as many as 15 competitors within three shots. But what was shaping up to be a crowded sprint to the finish quickly turned into a Talladega-like back nine with one crash after another and the need for more paramedics than paragliders.

Chunks? Check; Koepka’s mess at the par-5 closing hole ended his chances. Fried eggs? Double check; Rory McIlroy drew a wicked lie in a bunker at No. 12 and made double bogey to eject himself. Foot slips? Those, too; not even Bryson DeChambeau could keep his footing on the 13th tee box, and the defending champion went on to cap a deflating bogey-bogey-double stretch. A snowman? That was also DeChambeau, at the par-4 17th. Ball stuck in a tree? Yup, even one of those; Mackenzie Hughes didn’t end up climbing it and he went on to double No. 11.

Oh, and did we mention there was even a streaker on the 13th hole?

With Harris English coming out of nowhere to post 3 under, that left Oosthuizen, at 5 under, and Rahm, at 4 under, as the top two contenders coming down the final third. Rahm drew even with Oosthuizen on the 17th hole by holing a big-breaking birdie putt from 25 feet – and delivering a huge fist-pump in reaction. And a hole later, he took the lead with another clutch birdie, this time from 18 feet, and violent fist pump.

Rahm was the only player in the final six twosomes to put together a bogey-free back nine, and Oosthuizen was the last to bow out after hitting his drive into the canyon at the penultimate hole and making bogey.

What it means: Rahm entered the week with seven major top-10s, though he had never seriously contended late on a Sunday. There was also a lot of talk this week about perspective – Rahm became a father a couple of months ago and was coming off a heart-wrenching WD at the Memorial after he tested positive for COVID-19 while leading by six shots – but it was impossible to ignore Rahm's poise on the back nine. Once thought to be too combustible to get in done in golf's toughest tests, Rahm looked bulletproof as he finished up at a treacherous Torrey.

He is now just the fourth player to finish off a U.S. Open victory birdie-birdie, joining Ben Hogan (Oakmont, 1953), Jack Nicklaus (Baltusrol, 1980) and Tom Watson (Pebble Beach, 1982). And while Rahm has his first major now, the victory also marks the first U.S. Open triumph for Spain.

Rahm is projected to move to No. 1 in the world, as well.

Rounds of the day: Rahm's 4-under 67 tied Patrick Reed and Branden Grace for the low Sunday round. He birdied his first two holes and last two while carding just one bogey, at the fourth.

Shot of the day: Does Rahm have a knack for making clutch putts or what? Here are the latest two that sealed him his first major:

Biggest disappointment: Tons of candidates here as Torrey wreaked havoc for the final few hours. But we’ll go with DeChambeau, who led the championship outright on the back nine before playing Nos. 11-13 in 4 over and dropping off the pace. When his ball came to rest against a Stella Artois box on the 13th hole, it wouldn’t have been surprising to see DeChambeau crack one open to relax a bit. But the slide continued, and DeChambeau added insult to injury with a wayward tee ball and shanked chip at No. 17, where he carded an '8'. He closed in 77 to finish nine shots back.

Winning quote: "I'm a big believer in karma, and after what happened a couple weeks ago I stayed really positive knowing good things were coming. I didn't know what it was going to be, but I knew we were coming to a special place, I knew I got my breakthrough win here and it's a very special place for my family, and the fact that my parents were able to come, I got out of COVID protocol early, I just felt like the stars were aligning, and I knew my best golf was to come. I have a hard time explaining what just happened because I can't even believe I made the last two putts, and I'm the first Spaniard ever to win a U.S. Open. This was definitely for Seve. I know he tried a lot, and usually we think a lot about him at the Masters, but I know he wanted to win this one most of all. I just don't know how to explain it." – Rahm