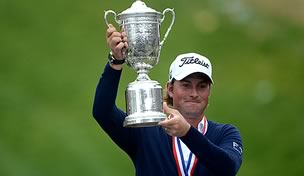 SAN FRANCISCO – Webb Simpson’s wife was a little worried about her man after he awakened Sunday before the final round of the U.S. Open.

He seemed unusually high strung on the morning of a big event.

She figured out what was happening.

“Webb had asked me to get him a decaf coffee, but I accidentally got him a regular coffee,” Dowd Simpson said. “So he was bouncing off the walls.”

That was somehow fitting on a day when another rising young star would put a crazy jolt into American golf.

Simpson’s victory marked the third consecutive major championship triumph by a player from the United States. With Keegan Bradley, now 26, winning the PGA Championship last August, with Bubba Watson, 33, winning the Masters in April and with Simpson, 26, winning the U.S. Open on Sunday, the American game continues to be re-made with a fresh cast.

Yes, Tiger Woods is still the highest ranked American in the world at No. 4 with his two victories this year, but he’s sharing the stage with fellow Yanks these days, not dominating it.

Jason Dufner, 35, has emerged as a new force this season. Rickie Fowler, 23, broke through to win his first title. So did Kyle Stanley, 24, and John Huh, 22.

While Hunter Mahan, 30, is hardly a new face, he’s assuming a larger role on the American stage. Mahan, Dufner and Woods are the early candidates for the PGA Tour Player of the Year award with two titles each this season.

Count Dustin Johnson, 27, in this deepening cast of American stars. His victory at the FedEx St. Jude Classic two weeks ago was the ninth consecutive PGA Tour victory by an American this year. It was also the sixth of Johnson’s career, giving him more PGA Tour titles than any other player in his 20s today.

These new American stars are drafting off each other’s success.

Simpson, who emerged as a PGA Tour Player of the Year candidate with two titles last year, says he was motivated witnessing his peers succeed.

“I see Keegan Bradley win a major, and I respect his game a ton, but I feel like, `Keegan Bradley won one, I want to go win one,’” Simpson said. “All these guys that won before me, I played with these guys all my life. They're great players, but I wanted to do what they were doing.  Everybody is so competitive that we just kind of feed off of each other.”

The top three players in the Official World Golf Ranking may be European, but the game’s most important titles are being won by those west of the Atlantic Ocean.

Halfway through this major championship season, there looms the possibility of an American Slam.

Even with Woods at his best, Americans couldn’t sweep all four majors in the same year. They haven’t done that since 1982. That’s the year Craig Stadler (Masters), Tom Watson (U.S. Open, British Open) and Raymond Floyd (PGA Championship) made it a red, white and blue sweep of the year’s most important championships.

The world rankings are evidence of just how much the American landscape is changing.

At the start of last season, the highest ranked Americans were Woods, who was then age 35; Phil Mickelson, then 40; Jim Furyk, then 40, and Steve Stricker, then 43. They were the only Americans in the top 10 in the world. Today, Woods still ranks highest, but it’s a whole new American cast alongside him. Simpson, Watson, Matt Kuchar (33), Dufner and Mahan are all among the top 10.

Not that long ago, back at the start of 2010, the top three spots in the world rankings all belonged to Americans. Woods, Mickelson and Stricker were 1-2-3.

With major championship titles beginning to pile up in their favor, the Americans might be getting ready to make a run at taking back the top three spots in the world.