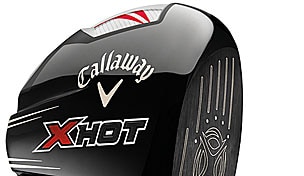 In its early years, Callaway was best known for its high-performance drivers, especially the Big Bertha and Great Big Bertha products. Things changed over the years, however, as the club maker focused more intently on other categories, such as irons and golf balls. But its driver legacy remained a strong if somewhat distant memory. Callaway officials no doubt hope to recapture some of that former greatness with the introduction of the X Hot driver.

The story of the X Hot begins with “Frame Face Technology,” which is designed to increase ball speed, save weight and optimize stiffness and stress distribution across the clubface for more efficient energy transfer.

The club is also made to promote more – and more consistent – distance, even on off-center hits. And a tighter curvature face relative to the previous generation RAZR X Black driver is geared to provide a more preferred look at address along with consistent sidespin and dispersion to promote accuracy.

According to Dr. Alan Hocknell, senior vice president of research and development at Callaway, the fast face is but one piece of the technology puzzle. “We went to great lengths to configure the drivers not only to promote distance but also to progressively optimize performance for various player types,” he said.

Hocknell then goes on to describe how Callaway has implemented its thinnest casting technology ever in the all-titanium, 460cc heads of the X Hot, to create a lighter swing weight and overall configuration, so that it benefits players with average swing speeds, as well as those with ones much faster. A draw bias progression based on loft is also included, allowing players to better tune their clubs. In addition, the X Hot features an adjustable OptiFit hosel, which enables golfers to adjust the face angle into Open, Square and Closed positions.

The standard X Hot driver became available as of January 25, while a Pro version with a slightly smaller club head and more open face angles will be released in mid-February.