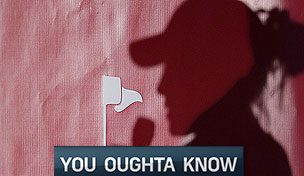 RANCHO MIRAGE, Calif. – What you ought to know going into the final round of the Kraft Nabisco Championship:

• Inbee Park is evolving into one of the LPGA’s most consistent contenders. Last year, she put together a run at the start of summer where she finished first or second eight times in 14 events. She finished outside the top 10 just twice over that five-month span. She won the LPGA money title and the Vare Trophy for low scoring average last year.

• Park proved her mettle in majors in 2008, winning the U.S. Women’s Open at Interlachen. Park has finished among the top 10 in nine of the last 12 major championships. She’s a four-time LPGA winner with three of those titles coming over her last 15 starts.

• There might not be a better putter in the women’s game than Park. She has ranked first in putts per GIR in three of the last five years. She hasn’t ranked outside the top 10 in the last five seasons.

• While Park is a proven winner, she struggled to close out final-round leads last year. She had the 54-hole lead, or a share of it, four times last year and closed out a win in just one of them.

• Lizette Salas, three shots behind Park, is enjoying a strong start to her sophomore season.  She arrived this week coming off a T-6 at the Kia Classic and a T-4 at the RR Donnelley LPGA Founders Cup.

• Suzann Pettersen will be trying to give herself “the best birthday present ever” on Sunday, when she turns 32. Pettersen has been runner-up three times at the Kraft Nabisco. She is among six players who are six shots back.

• Karrie Webb is one of those players six shots back. Webb came from seven shots back when she won the Kraft Nabisco in 2006, the second of her two titles here. Webb won in ’06 with one of the most famous closing shots in major championship history. She holed out a pitching wedge from 116 yards for eagle at the 72nd hole to get into a playoff with Lorena Ochoa.

• Angela Stanford starts six shots off the lead in a bid to win her first major championship. Stanford is 10 years removed from her playoff loss to Hilary Lunke in the U.S. Women’s Open at Pumpkin Ridge. Stanford tied for third at the Kraft Nabisco two years ago and has seven top-10 finishes in majors.

• There are double Solheim Cup team points available for American and European players based on Sunday’s finish. First place will be worth 120 points, second worth 60 and third worth 57, with points awarded all the way down to 20th.