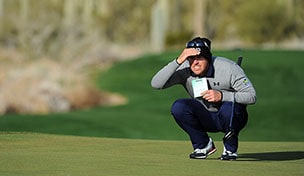 Two men are left standing to vie for the title at the WGC-Accenture Match Play Championship. Here is what You Oughta Know as Matt Kuchar and Hunter Mahan get set to square off in the final:

• No matter whether Kuchar or Mahan takes the title, this will be the second straight year a No. 6 seed won it all.

• If Mahan repeats as champion, it will be largely on the back of a solid putter. While he is not exactly known for having the best short game around, Mahan went into the semifinals having remarkably holed each of the 53 putts he faced this week inside of 10 feet. Should he take home the Hagen Trophy in consecutive years, he would become only the second player to do so, after TWoods accomplished the feat with wins in both 2003 and 2004 when the event was staged at La Costa.

• While several matches have been close this week, don't expect Sunday's final to go the distance. Although the tournament moved to an 18-hole final a few years ago, the event's ultimate match has not reached the final hole since Kevin Sutherland beat Scott McCarron, 1 up, in 2002. The only time the final ever went to overtime was in the event's first year, 1999, when Jeff Maggert downed Andrew Magee with a chip-in birdie on the second extra hole.