Using a fairway wood or hybrid around the greens 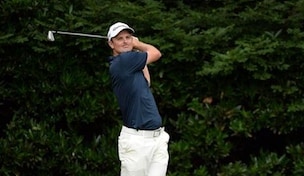 The 2013 U.S. Open at Merion was memorable not only for the great course, but also for the way the winner, Justin Rose, handled the wide variety of shots required to avoid and escape the excessively penal rough.

His penultimate shot of the day, a putt from the fringe of the 18th green with his 3-wood, was perhaps his best of the day as well.

Using a fairway wood or a hybrid instead of a putter around the green would benefit a lot of golfers if they better understood how to play that shot, and practiced it of course.

That being the case, we asked SwingFix instructor Bernard Sheridan, founder and director of golf at Par Breakers Golf Academy in Limerick, Pa., to walk the average golfer through that shot.

'Justin Rose closed the deal for his first major win using his three-wood from just off the green,” Sheridan said. “He hit this shot to only a few inches from the cup.

“Rose chose the three-wood for several reasons. First was that he had a good lie and the ball was sitting up in the rough. Hitting a wedge would have been risky because he could have slid the club under the ball and not made solid contact. He used the club that gave him the best chance to get it close in a high-pressure situation.

Sheridan went on to offer a few tips for the average player to better utilize this shot at their home course.

'First, choke up on the grip. Get your hands close to the shaft,” Sheridan added. “This gets you closer to the ball for better control. Next, get the shaft a little more upright. Choking up will also help this happen.

”Then take the clubface back and through exactly as if it were a putt. This will get the ball to roll through the rough and continue rolling to the hole once it gets on the green. This shot will also work with a hybrid club. Give both a try to see which club you feel the most comfortable with.'