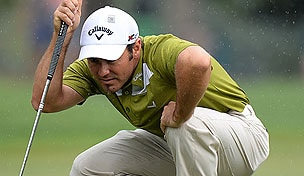 “I like everything about this place, starting with the drive in,” Immelman said with a smile late Thursday afternoon. “I’m comfortable here. I haven’t forgotten what it takes to play good golf here. I always come here believing it’s going to happen again.”

Immelman was 28 when he made it happen here in 2008, winning the Masters by three shots over someone named Woods. (Eldrick T. for those scoring at home). He wasn’t just a rising star at that point, he was a star – a major champion. Then injuries intervened – tendinitis in his left wrist and thumb that led to surgery late in 2009 that led to sporadic – and frequently awful – play when he returned.

Through it all he still managed to make it back to Augusta every year and play reasonably well: he finished T-20 in 2009; T-14 in 2010 and T-15 in 2011. His best finish in the other three majors is a T-12 at the 2011 PGA Championship. Like everyone who has won here, Immelman feels different – special, lucky, relaxed – when he drives down Magnolia Lane.

All of those feelings came back Thursday when he made some putts – a rare occurrence lately – and shot 68, meaning he started the second round two shots out of the lead. Even though he struggled on the back nine Friday morning and shot 75, he was still in contention at 1-under-par 143 going into the weekend.

“He made a couple of putts early and you could see him relax a little,” said Scott Sajitanic, who has caddied for Immelman since last June. “Trevor’s hit the ball well for the last six months now and gotten nothing out of it. For a while, his chipping was just woeful and he’s worked hard to make it better. Now, he’s at the point where it’s a matter of making some putts.”

Sajitanic went to work for Stuart Appleby early in 2010 when Appleby had been struggling with his game. That summer, Appleby shot 59 in the final round of The Greenbrier Classic to win for the first time in more than four years. Sajitanic sees a lot of Appleby circa 2010 in Immelman circa 2013.

“They’re both so analytical,” he said. “They both want to break down every aspect of the golf swing to the point where they tend to start playing swing and stop playing golf. All I keep telling Trevor is ‘chill out, enjoy playing.’ I just try to keep hammering him with that thought. When he does that – the way he did on Thursday – he’s a different player. I have no doubt when he won here he was just playing golf and enjoying it. That’s what he needs to get back to doing.”

Immelman’s victory here was stunning for several reasons, one being that he had only one victory on the PGA Tour. More remarkable, though, was that he had been in a South African hospital wondering if he’d ever play golf or be healthy again four months earlier.

He began to feel severe pain in his rib cage while preparing for a tournament prior to Christmas in 2007 and went to a hospital for tests. A lesion on his lung was discovered that was – ironically enough – the size of a golf ball. The lesion turned out to be benign. Nonetheless, it was a frightening experience especially for someone who had become a father for the first time 18 months earlier.

It took Immelman eight weeks of treatment and recovery time before he could play golf again. His response was the win at Augusta. But just when he seemed on the verge of becoming an elite player his health intervened again. This time it was his wrist. After playing in pain for several months in 2009, he had surgery. Since then, the game he made look so easy has been very hard.

“I know my results don’t show it (his best finish this year has been a T-38 in Los Angeles) but I have felt as if I’m close to playing well for a while now,” he said. “Being here certainly helps.

“I love the idea that I can come here the rest of my life, that I can go to the Champions Dinner every year, that I have a place here. I feel as if I know the golf course and I know the greens. I honestly believe if I can hang around until Sunday I can handle myself in the heat because I did it here before.”

He smiled. “This (Thursday) is just one round. There’s a long way to go until Sunday.”

That was evident on Friday but Immelman didn’t fall apart completely as he might have in the recent past.

“Honestly, he just needs to wake up happy in the morning,” Sajitanic said. “I feel quietly confident that he’s getting close to that corner he needs to turn. I like to watch him putt here because the greens are so fast you can't be mechanical. You have to feel the ball into the hole. He does that here. When he’s here, golf seems to become fun again.

“I could feel it on the first tee Thursday. Then he made about a 12-footer for par on nine and you could almost feel him loosen up and feel confident. He just needs to do more of that.”

The good news is that Immelman’s wrist is – finally – completely healed. His golf swing has healed too. Now, as with so many good players, he has to find his putting touch. If he can do that this weekend and can climb back onto the leaderboard, it could give him the jump-start he needs.

“I still remember watching this tournament when I was a 6-year-old kid in South Africa,” Immelman said. “It was 1986 – (Jack) Nicklaus’ back-nine 30 to beat all those guys coming down the stretch. I remember thinking way back then, ‘I’d like to play there some day.’

“Then I not only got to play I actually won. Every year at the (Champions) dinner I look around and pinch myself and say, ‘Am I really here?’ I’m sitting at a table with Arnie and Jack and all of these guys who are heroes of mine. It’s amazing.”

Immelman has staked out a place near the far end of the table opposite from where the defending champion and the chairman sit. He usually finds himself sitting with Nick Faldo and Gary Player. On Tuesday he got a brief scare when Player, in mid-story (naturally) appeared to be choking on some food.

“Charl Schwartzel jumped up and pounded him on the back and he was OK,” he said. “It was scary for a minute. I was thinking he might need the Heimlich for a minute. The best part, though, was that once he was OK, Gary didn’t miss a beat. He just went back to his story.”

Immelman expects to hear a lot more of those stories in the years to come. In the meantime, he’d like to write a few more of his own on the golf course.